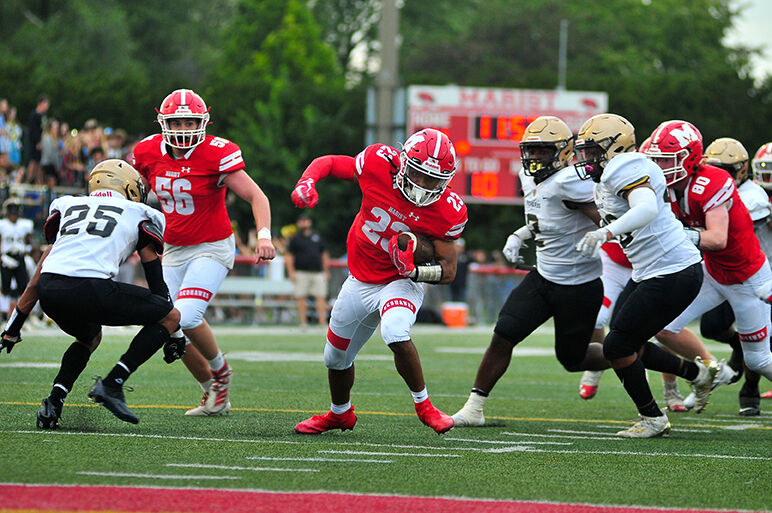 Marist senior running back Jaylen Johnson barrels through the Richards defense on his 6-yard touchdown run in the second quarter. Johnson rushed for 76 yards and 2 touchdowns on Sept. 3 as host Marist rolled to a convincing 45-7 victory over Richards.(Review photo) 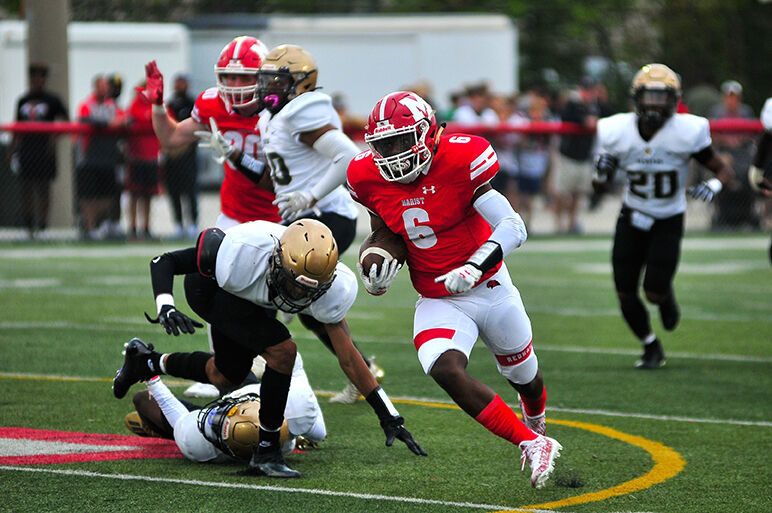 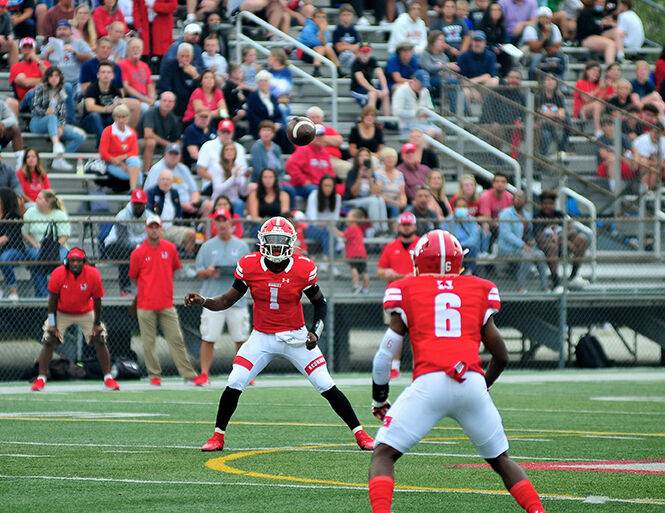 Marist senior running back Jaylen Johnson barrels through the Richards defense on his 6-yard touchdown run in the second quarter. Johnson rushed for 76 yards and 2 touchdowns on Sept. 3 as host Marist rolled to a convincing 45-7 victory over Richards.(Review photo)

He listened, learned and when he was sent into a game, was prepared to make the best of every snap.

Now in his senior year, Johnson has been a force for a RedHawks offense featuring a wave of new skill players looking to make a name for themselves. Johnson rushed for 76 yards and 2 touchdowns on Sept. 3 as host Marist rolled to a convincing 45-7 victory over Richards.

“It’s been great. It’s a challenge every week to show what we have and bring it every play and every down,” Johnson said. “I believe I needed that year to learn from Jamari and improve myself as a football player. It helped me tremendously.”

The senior running back isn’t the only Marist offensive player to break out in two weeks as senior Ak’Tavion Agee finished with 5 catches for 130 yards and a TD against Richards.

Dontrell Jackson Jr., the team’s returning starter at quarterback, had a monster dual-threat day, piling up 185 passing yards and 2 touchdowns and 79 rushing yards and a TD.

Marist Coach Ron Dawczak has been impressed with the firepower of his offense.

“They’ve really stepped up. There are talented guys who were just waiting to make a name for themselves,” Dawczak said. “In the spring, they didn’t get as much of a chance to show it. Now, they’re taking advantage of their opportunities. They worked hard waiting for nights like this to show what they can do.”

Agee, a 5’9”, 165-pound wide receiver, wasted no time establishing his presence in the Richards win.

On the first offensive play from scrimmage, Jackson hit Agee across the middle near midfield. Agee caught the ball in stride and was gone, leaving two Richards defenders behind him.

The 69-yard receiving touchdown came just 11 seconds into the game.

“Once I caught it, I felt like nobody was too close,” Agee said. “I put a move on, and I saw in my peripheral that my defender collided with a teammate. After that, I was gone. Nobody was going to catch me.”

Agee transferred to Marist from St. Rita after his sophomore year. Last year as a junior, he saw limited action but is striving to lead the offense.

He’s working closely with Jackson to make sure they’re on the same page.

“Besides practice, we’ll come up here a couple times a week to get that extra work in,” Agee said. “We game plan a lot, so we work on all the thing we need to do next week. Our mindset all week was to set the tone on the offensive side and hit them in the mouth.”

Richards answered on the ensuing kickoff with an 80-yard TD return, but Marist’s explosive offense was too much. Johnson scored his first TD late in the first quarter on a 6-yard dive.

He added another TD early in the second on an 11-yard plunge. Senior Conor Cooke connected on a 22-yard field goal as Marist took a 24-7 lead into halftime.

However, Johnson isn’t focused on his stats. He just wants the wins to continue.

“It feels really good [to be starting],” Johnson said. “It all goes back to my team and contributing and helping the team win.”

Marist received major contributions on the defensive side as well, including a key pass break-up in the end zone by Will Carey late in the first half. Senior linebacker Jimmy Rolder added a tackle for loss early in the second quarter.

However, Rolder’s highlight came early in the fourth as he leapt to intercept a Richards pass and returned it 30 yards for a score.

“It was a good read on the receiver and on the ball, and I was just in the right spot at the right time to get the job done,” Rolder said. “When I saw the open end zone, it was like a steak dinner coming up for sure.”

Senior John Nestor picked off a Richards pass early in the fourth.

An inexperienced but talented defense has only given up 7 points through two games. Rolder likes the total team effort he’s seen.

“We’re all doing our job and working together,” Rolder said. “We’re playing ball, doing what we can and executing, and that’s helping us succeed.”