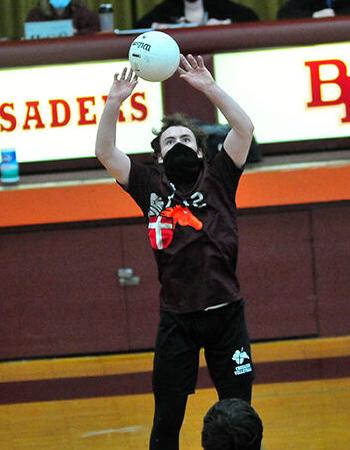 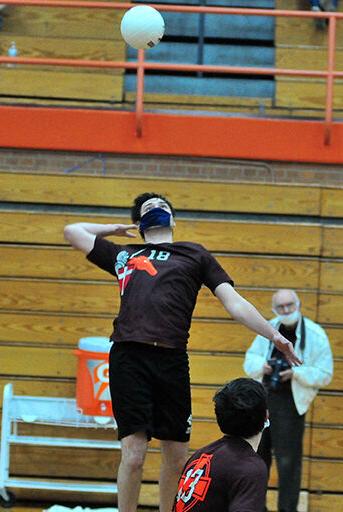 Br. Rice junior Joe Pfeiffer blasts a shot against St. Rita in the third set. Pfeiffer had 11 kills for the Crusaders. (Review photo) 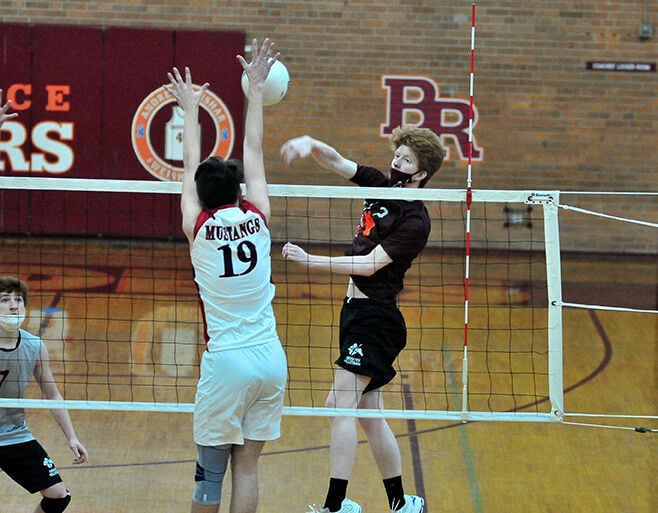 Br. Rice junior Joe Pfeiffer blasts a shot against St. Rita in the third set. Pfeiffer had 11 kills for the Crusaders. (Review photo)

Joe Pfeiffer had only played volleyball with his Br. Rice teammates during a handful of open gyms and practices at the start of this season.

However, the junior had never taken the court with any of them as a member of the varsity team.

In fact, when the Crusaders opened their season on April 16, every member of the team was making his varsity debut. None of the athletes was on the varsity team in 2019, and the pandemic caused the cancellation of volleyball and spring sports in 2020.

“It’s been pretty crazy to be back,” Pfeiffer said. “I played with these guys at some open gyms, but being in a gym and coming in every day, everyone has been such a good teammate. We all contribute and bring something to the table. It’s been awesome.”

Pfeiffer led the Crusaders with 11 kills in the 3-set loss.

In a back-and-forth match, the Crusaders’ errors proved to be too costly.

Br. Rice committed 22 service errors and 17 attack errors, a trend that continued from a 2-set loss to Loyola Academy earlier in the week.

Br. Rice Coach Dan Dwyer said the struggles at the service line are something that can be fixed with practice, but lately, it’s been tough.

“It’s a mental thing right now. They’re thinking too much,” Dwyer said. “In between the lines, we outplayed [St. Rita]. We played some great volleyball. That’s the frustrating part. We were running a beautiful offense and a great defense behind the block. We gave them too many free points.”

The senior setter struggled getting his jump serve to drop against St. Rita, but the Crusaders didn’t panic due to so much talent on their roster.

“It was a day that I couldn’t find the court. I’ll get back in the gym and work it out,” Hollander said. “Everybody on our team, it’s the first varsity season. It’s a pretty exciting group to watch.”

When the service game was working for the Crusaders, the offense clicked on all cylinders with Hollander spreading the wealth to a deep lineup of hitters, including 6’4” Pfeiffer (St. Barnabas), 6’3” Fiedler, 6’9” VanAssen, 6’6” McKee (Christ the King) and 6’4” Lamb.

Hollander said his mindset is to go with the hot hand as often as possible. If a teammate is putting away kills, the ball is coming his way.

“If someone’s hot, someone’s hot, and I’m going to keep feeding him,” Hollander said. “Our middles were on fire today. When the other team cracks down on that, I look to my hitters and right sides and give them the opportunity to put it away. They did today.”

Pfeiffer shook off a couple blocks of his kill attempts to deliver some timely points for the Crusaders, especially late in a hot-hitting second set.

“I got blocked a couple times in a row, so I know if I’m having an off moment, my teammates have my back,” Pfeiffer said. “I’ve got great teammates. It’s a major team strength, our depth, and Sean is a great setter at being able to utilize it.”

Br. Rice played at Marist on May 5, after press time, the first of two scheduled matchups between the neighborhood rivals.

Dwyer is confident his team will find its serving rhythm going forward.

“We were playing excellent volleyball,” Dwyer said. “Once we get the service line situated, we can play with anybody. We can focus in there. Worst case, we’ll just pitch it over and go from there.”