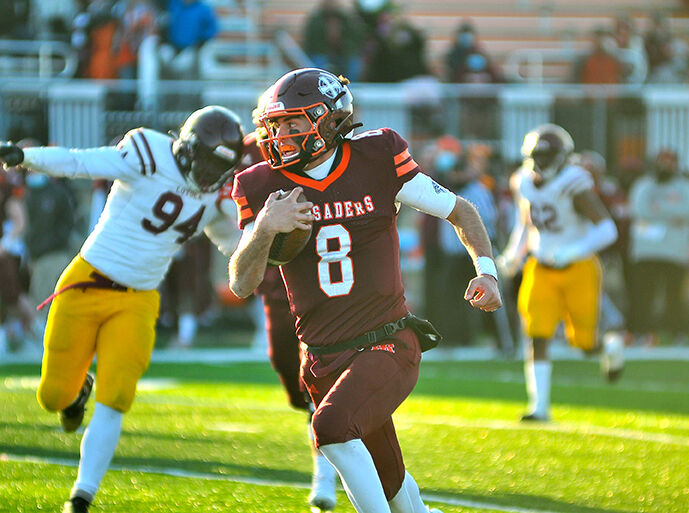 Br. Rice junior quarterback Jack Lausch piles up yardage on a run in the fourth quarter. Lausch connected with Dwayne Moorehead on a 6-yard touchdown pass in the fourth. (Review photo) 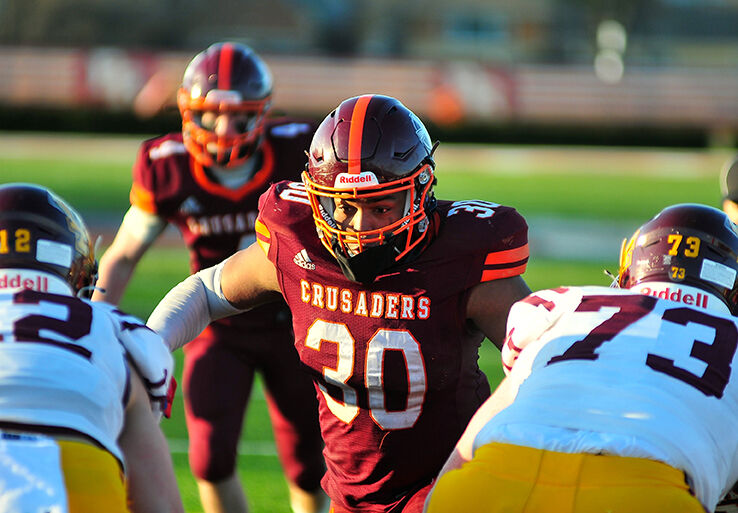 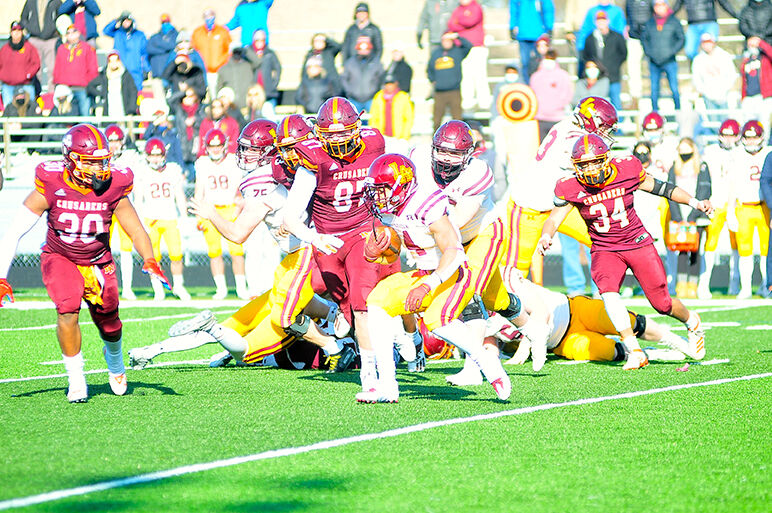 Br. Rice junior quarterback Jack Lausch piles up yardage on a run in the fourth quarter. Lausch connected with Dwayne Moorehead on a 6-yard touchdown pass in the fourth. (Review photo)

After struggling to sustain drives through three quarters, the Br. Rice offense was moving down the field.

The passing game was clicking, and timely runs were piling up yardage.

Although the touchdown wasn’t enough for the Crusaders, the consistency of the scoring drive was a start that Lausch hopes Br. Rice can use to get on track for the second half of the short spring season.

“It’s frustrating, especially against a rival like that,” Lausch said. “The only thing we can do is go forward and learn from this. Our guys fought until the end, and that shows some pride. We can learn from this and capitalize going forward.”

Br. Rice was down 21-0 in the fourth quarter before the late score.

The Crusaders dropped to 1-2, 0-2 overall with three games remaining against St. Laurence, Carmel and Mt. Carmel.

The defeat was disappointing, but Lausch said there were positives to build on.

“Obviously that’s a great, great defense,” Lausch said. “They tackle well and play well on third down. As an offense, we have to focus on keeping the chains moving and finishing drives. If we play our game, we’re confident we can do whatever we want.”

On the scoring drive late in the fourth, Lausch connected with Moorehead, a 6’3” wide receiver, on a 6-yard TD pass. Down 21-7 on the next drive, the Crusaders strung together some long plays, including a 58-yard Lausch run, but a late interception quashed the momentum.

Br. Rice Coach Brian Badke said the Crusaders will learn from their mistakes.

“We didn’t execute. We’ll look at the film, and there are probably three or four plays we let get away,” he said. “Defensively I thought we played really well and tackled well. They made a couple plays, and we didn’t finish.”

One of plays the Crusaders missed came in the first minute of the fourth quarter. With Loyola driving near midfield, Br. Rice junior linebacker Rolando Sepulveda swooped in on a pass to the Loyola sideline.

Sepulveda reeled in the ball and raced upfield into Loyola territory. It was only after he was tackled that he realized flags had been thrown behind him.

Pass interference was the call, and the ball went back to Loyola.

“I thought it was clean,” Sepulveda said. “As soon as I got tackled, I looked around and saw people complaining. It would have been a huge momentum swing there.”

Sepulveda finished with 7 tackles and a sack for a loss of 10 yards.

Loyola finished with 215 rushing yards on 31 carries, including a big day from running back and Ball State recruit Vaughn Pemberton (155 rushing yards, 2 TD).

Pemberton closed the game with a 43-yard run with 3:59 left on the clock.

“Their offensive line is pretty big. They’re pretty fast, and [Pemberton] is really good,” Sepulveda said. “We had to stop the run. We did that the first half. We did a good job. In the second half, we couldn’t.”

During the final three weeks of the year, Badke plans to continue to get the ball more to senior Willie Shaw as he returns from an injury.

Shaw (Beverly) is a Toledo recruit.

With talent in the backfield and at the skill positions, Badke wants to see the offense establish itself early in the next games.

“We’re still trying to find our identity offensively,” Badke said. “We’ve got some guys with skill. We need to execute better. Today, Loyola executed, and we didn’t.”