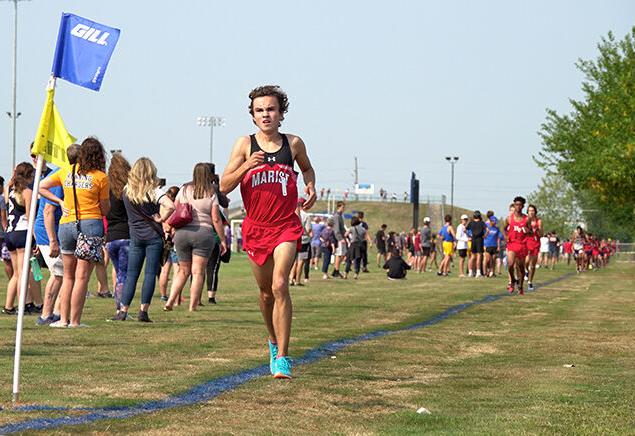 Marist senior Jake Phillips gets way ahead of the pack halfway through the varsity race of the annual Reavis Rams Invitational. Phillips was first, 29 seconds ahead of Habtamu Epley from Homewood-Flossmoor. (Review photo) 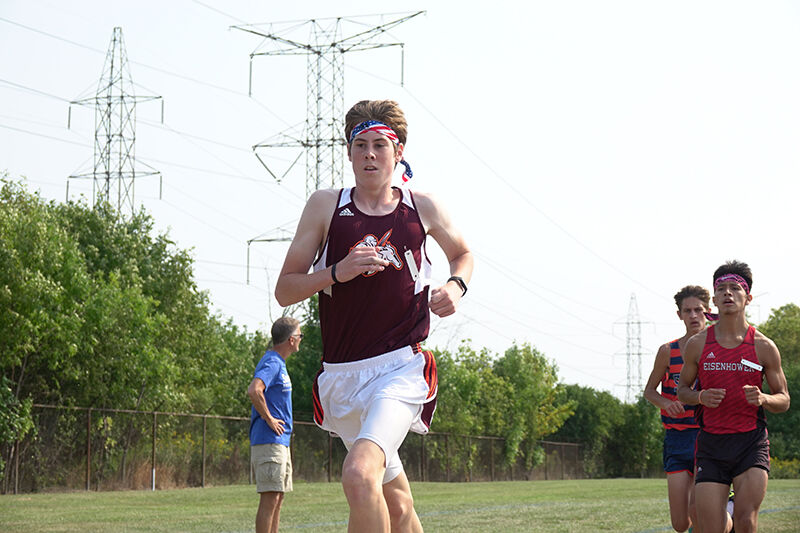 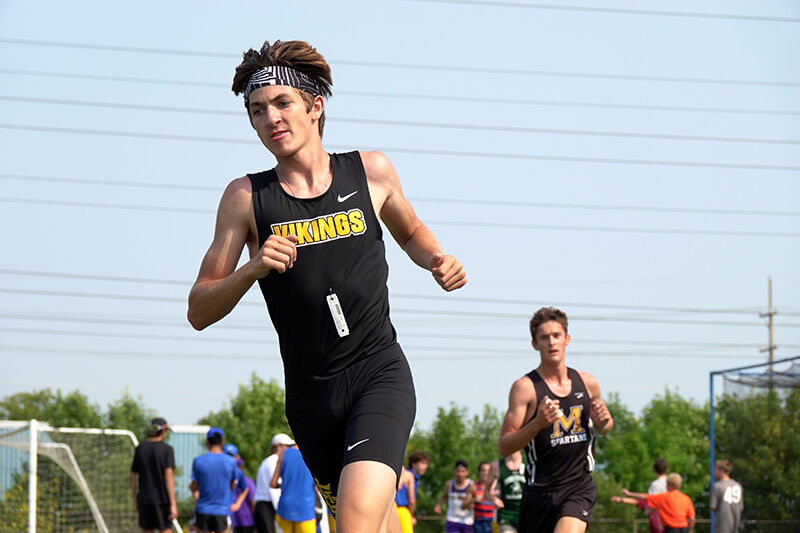 St. Laurence junior Allan Potter makes the turn into the final mile of the varsity race. Potter led the Vikings with his 25th-place finish. (Review photo)

Marist senior Jake Phillips gets way ahead of the pack halfway through the varsity race of the annual Reavis Rams Invitational. Phillips was first, 29 seconds ahead of Habtamu Epley from Homewood-Flossmoor. (Review photo)

St. Laurence junior Allan Potter makes the turn into the final mile of the varsity race. Potter led the Vikings with his 25th-place finish. (Review photo)

Jake Phillips doesn’t focus on his final times from race to race.

Instead, the Marist senior just waits to get out and go when a meet begins.

“I don’t really care for my times. I stopped caring about times. I look more to my placements,” Phillips said. “My time can get me so far, like worrying about my time over my place. I’ll take first any day of the week.”

Running a dominant race, Phillips finished first in the 56th annual Reavis Rams Invitational on Sept. 11 in a field of 115 runners. Phillips ran the 3-mile race in 16:13.6, 29 seconds ahead of Homewood-Flossmoor sophomore Habtamu Epley (16:42).

After a junior year that featured no meets with double-digit teams until the sectional and no state finals, Phillips is savoring a more normal senior season.

“I treat our races like a regular day, a normal workout,” Phillips said. “I did pretty good overall today. It’s nice to have a normal year. It’s fun that we’re able to do these meets again. Sophomore year was such a good time for me. The meets were fun and fast.”

Phillips was a force at Reavis, taking the lead immediately and never giving it up on the course that winds around the Reavis campus, including two portions up a steep hill on the course.

“It does mean a lot to me to be a captain,” Phillips said. “The three of us want to focus on the younger runners for next year when we’re not here so they can be the best runners they can be this year and into next year. We’re starting to get the guys to build up to that level they should be.”

A year ago as a sophomore, Charlie Walsh was a solid top-7 runner for the Crusaders in a lineup dominated by two seniors, Eddie Burke and Mikey Corcoran.

Now with the seniors graduated, Walsh and a new crew of runners is ready to step into bigger roles at the front of the race.

“It’s definitely different this year. Eddie and Mikey were finishing one and two almost every race and were way up there,” Walsh said. “We have a pack this year. [Coach Tom Wazio] always use the quote, ‘The wolf is the pack; the pack is the wolf.’ That’s our strategy this year.”

One of the top varsity runners for the Crusaders, sophomore Charley Duggan (Most Holy Redeemer) won the freshman/sophomore race (17:20).

Walsh said the rising temperatures had an impact on his race, but he battled through the hot conditions.

“It was tough. The race felt slow. The hill really killed me, especially the second time around,” Walsh said. “For us [to keep improving], we’ve got to stay together in our workouts. If one guy gets in front, we’ve got to help him and stick with him.”

Potter credited his training leading up to the race and the coaches’ in-race strategy on a course that features an abundance of sharp turns.

“I followed the plan pretty good. We wanted to go out hard and stay to the left so we could get a nice turn into the flags,” Potter said. “It got increasingly hot out since the beginning of the race, so that was a little rough. Our hill practices helped push me through the heat and adversity.”

As the boys and girls cross-country programs continue to grow and build success under Coach Darrell Reed, Potter (Mt. Greenwood Elementary) said the future is bright.

“What’s so big is our young talent we have,” Potter said. “We only have a couple seniors, a handful of juniors, and the majority is freshmen and sophomores. I love leading, love my team, and it’s a great group of guys.”

Sophomore Rocco Cipolla (21st, 18:01) led the Mustangs who finished 10th in the team standings with 223 points.