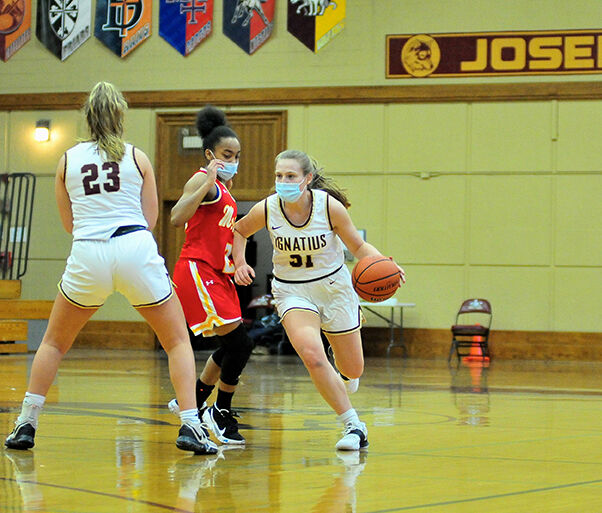 St. Ignatius senior guard Lauren McDonald works around a pick at the top of the key. McDonald led the Wolfpack with 17 points, 7 rebounds and 4 assists against Mother McAuley. (Review photo) 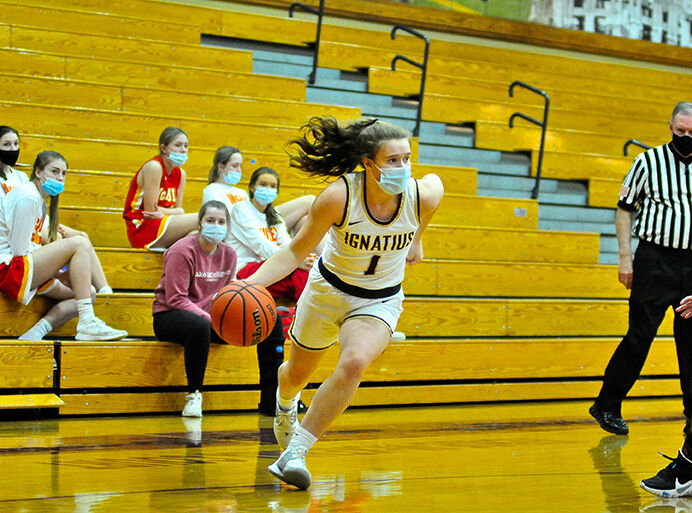 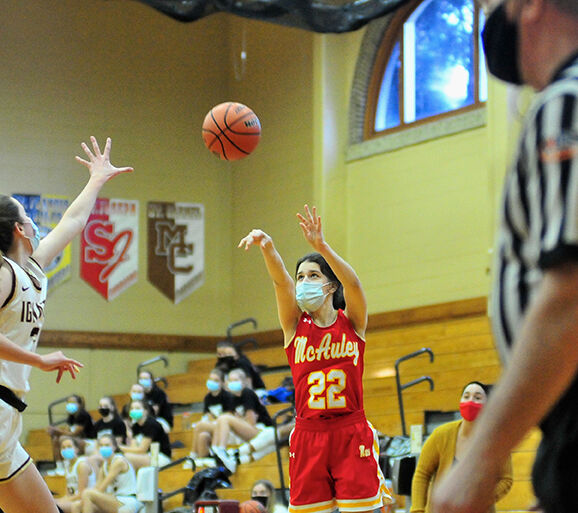 St. Ignatius senior guard Lauren McDonald works around a pick at the top of the key. McDonald led the Wolfpack with 17 points, 7 rebounds and 4 assists against Mother McAuley. (Review photo)

Lauren McDonald has been a starter on the St. Ignatius varsity basketball team since she arrived on campus as a freshman three-plus years ago.

She’s gone from being a supporting player to a star guard leading the way. But, even as she continues to shine during an unusual senior season, McDonald is quick to credit her teammates.

The Wolfpack isn’t a one-woman show—McDonald has plenty of back-up.

After scoring 32 points against the Mother McAuley earlier in the week, McDonald finished with 17 points, 7 rebounds and 4 assists on Feb. 21 in the Wolfpack’s 66-32 win over the Mighty Macs in Girls Catholic Athletic Conference-Red action.

“I want to do well, but it’s really been a team effort,” McDonald said. “We know which shot to take, when to take it and what’s the best shot for our team. It’s all really coming together. It’s starting to show. Hopefully, we can keep it up.”

St. Ignatius improved to 4-1, 4-0 with the second win over McAuley.

Regan (Beverly, St. Barnabas) said the team has deep faith in its offensive scheme of pushing the pace.

“When we run our offense and stay together, it flows really easily,” said Regan, a varsity starter last year as a freshman. “It comes down to staying together on offense. We especially did that today.”

Regan said preparation has been the key.

“I feel much more confident this year as a sophomore and starting again,” she said. “We’re really set with the team this year. I worked a lot on my playmaking and working on my shooting, getting the ball to everyone on the team.”

The Wolfpack showcased its offense in the opening quarter as McDonald and Regan led the way in a lightning-fast 18-4 run. Taute capped off the stanza with a buzzer-beating 3 off a pass from Poorman.

In the second quarter, McAuley fought back with a strong effort, getting as close as 5 points at 24-19. St. Ignatius didn’t panic, and the Wolfpack started the third quarter efficiently with Taute and Regan hitting 3-pointers and Ogele scoring with a hard cut to the hole.

Up 37-27 late in the third, St. Ignatius closed the quarter with 9 straight points, including 2 McDonald free throws and 3-pointers from both Taute and Regan.

“Every quarter, [Assistant Coach Tom McKenna] says, ‘It’s 0-0; don’t look at the scoreboard,’” McDonald said. “We have to keep pushing. That showed this game toward the end when McAuley made a run. We had to shut them down.”

McDonald is a U.S. Air Force Academy recruit, and she will be reunited next year with her sister, Nikki, a sophomore forward for the Falcons. At St. Ignatius, the McDonald sisters were key performers for the varsity during two seasons playing together.

In the meantime, Lauren continues to make the most of a senior season plagued by the pandemic.

“It stinks there’s not a state tournament, but we’ll take what we can get,” McDonald said. “It’s good to be playing again. It was such a long time we weren’t able to. There were times I could barely find a gym. No one could.”

Although the lack of gym time in the preseason hampered McDonald in working on her shooting skills, she improvised.

“I worked on just staying in shape and lifting a lot,” she said. “It’s helped with the speed of my game. I’m able to beat people more than I was as a freshman or sophomore. I couldn’t work on my shot as much, so I stayed in shape and prepared.”