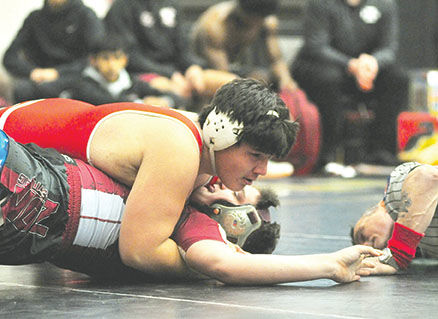 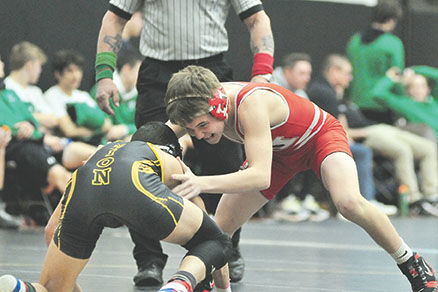 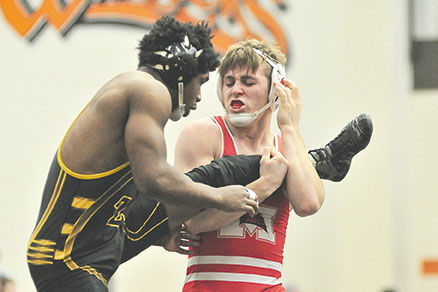 Tom Munoz has put in lots of time and hard work during his three years on the Marist varsity wrestling team.

Now as he looks toward the postseason, everything is clicking into place for the senior heavyweight and his RedHawk teammates.

“Tommy is figuring things out,” said Marist Coach Brendan Heffernan. “He’s a kid who does anything you ask, and he’s been plugging away. It’s great to see every time he wins.”

Munoz lost his match against Oswego, but against Zion-Benton, he delivered a pin in 43 seconds and squeaked out a 5-3 decision versus Maine South.

In his final season, Munoz is concentrating on helping lead a young RedHawks roster that’s loaded with talent.

“I’ve been impressed with a lot of our guys,” Munoz said. “I try and be a leader and show them what to expect from a senior wrestler. You try and show them how they have to work and how hard it is.”

Sophomores Brandon Weber (113), Owen Dunlap (120) and Ghee Rachal (195) both won all 3 of their matches at the Mega Duals. Freshman Andrew Dado won 3 matches, one each by pin, decision and forfeit.

One of the few seniors on the team, Marty Howard won 2 matches by forfeit, and in his only head-to-head match of the day, he won with a pin in 1:21 at 182 pounds against Maine South.

“It’s getting the juices flowing before the match. You sit around all day waiting for your match as everyone else goes,” Howard said. “You get a little pumped up wanting to get your match in. I needed to get the 6 points [for a pin] and secure that final dual-team win.”

Howard, a Mt. Greenwood resident and St. Christina graduate, has seen the team develop and put forth plenty of effort.

“We are a young team with a lot of talent,” Howard said. “When the football guys came back, the coaches talked about the intensity picking up. All you can ask is to learn from the experience, and we’ll try and lead by example.”

Dunlap and Rachal are ranked in the top 10 in Class 3A in their respective weight class.

The RedHawks will compete on Jan. 31 at Joliet Catholic in the East Suburban Catholic Conference (ESCC) meet and Feb. 8 at the Stagg regional, which feeds into the Hinsdale Central sectional.

“Everyone knows the team goal is to win the ESCC,” Munoz said. “Getting it last year was such a good boost of momentum heading into regionals. We want to do it again.”

Another strong performer at the Mega Duals was junior Ethan Bednarczyk, who won both his matches, winning by decision against Oswego and securing a pin in 3:48 against Zion-Benton.

Bednarczyk said he focused more on his offensive attack in both wins. As for the team’s success of late, he credited its chemistry.

“These wins keep us going and moving forward,” Bednarczyk said. “These were big wins. It’s a lot of young guys. We all stay together. It’s been a lot of team bonding. Every overnight tournament, we’re all hanging out in the hotel room together until lights out.”

Turning the team’s attention to the postseason, Heffernan has seen improvement in the wrestlers’ skill level, and he hopes the team is peaking at the perfect time.

“They’re making mistakes and learning. It’s a process they’re starting to understand,” Heffernan said. “They’re trying to score more points. Instead of being nervous, they’re going out there trying to have fun.”