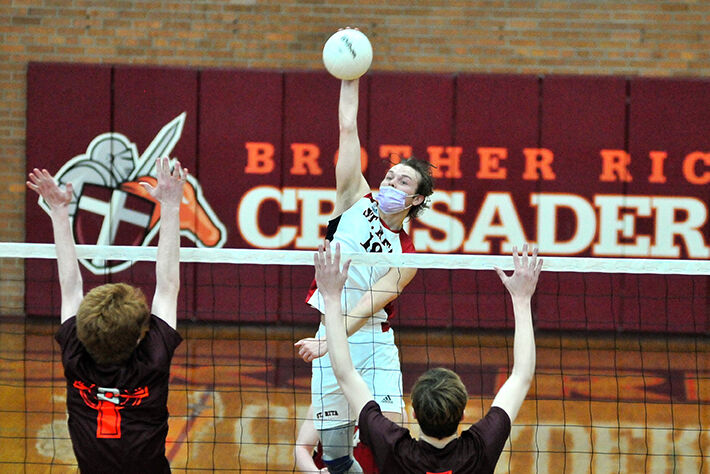 St. Rita senior outside hitter Zach Carroll goes up for a kill against the Br. Rice block. Carroll led the Mustangs with 10 kills in a 3-set victory. (Review photo) 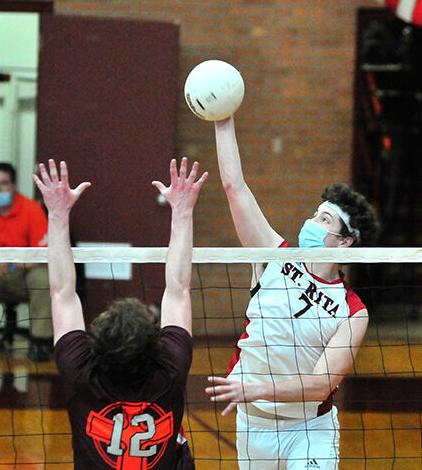 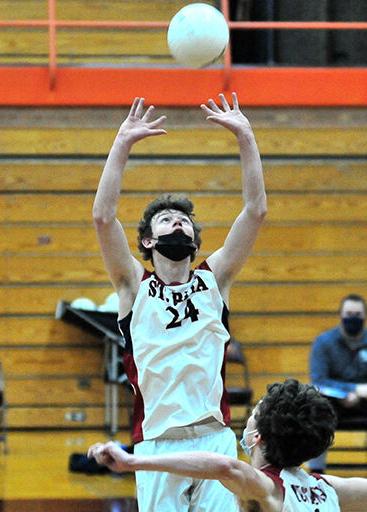 St. Rita senior outside hitter Zach Carroll goes up for a kill against the Br. Rice block. Carroll led the Mustangs with 10 kills in a 3-set victory. (Review photo)

Zach Carroll is a star this season as the starting outside hitter for St. Rita.

The senior has made the most of a position change after being a middle blocker his freshman year and a right-side hitter his sophomore year.

After missing his junior season due to the pandemic, Carroll is just happy to be back and swinging away for the Mustangs wherever he’s needed on the court.

“You’ve kind of got to step in wherever the team needs you,” said Carroll, a 6’2” outside hitter. “I don’t mind playing either spot. I want to help where I can. Last year, we got bummed out of a season, so this year, I’m really soaking it all in and trying to get the most out of it.”

Carroll, a Mt. Greenwood resident and St. Christina Elementary School graduate, has been a four-year starter for the Mustangs.

Playing a supporting role on the 2019 squad that advanced to the state quarterfinals when he was a sophomore, Carroll is now a go-to hitter on a junior-dominated roster.

St. Rita Coach Brian Hagen is thrilled to have Carroll in such an essential role.

“From a middle blocker to right side and now a six-rotation outside hitter, Zach’s taken that challenge,” Hagen said. “He’s so versatile. It’s a luxury to have a gamer like him. Not every kid wants the ball when it’s 24-23. He does, for sure.”

With both teams struggling with errors late in the third set, Carroll ripped his 10th kill of the match to put St. Rita up 22-20.

Junior middle Charlie Flynn (St. Cajetan) followed with a huge block on the next play to extend the lead. After a Kade VanAssen kill for Br. Rice, St. Rita claimed the win after back-to-back errors by the Crusaders, one a smash that went long out of bounds and the other a service error.

With St. Rita heading into the meat of its CCL schedule, the exciting rivalry road win should be a huge confidence boost for the Mustangs.

“It’s always tough coming to Rice. They always put a decent team out there that’s competing with us,” Carroll said. “We’re 2-0 in the CCL. It’s a big step forward for us. We’ve got some confidence under our belt, and now we can shake some things up.”

Aidan Flynn (St. Cajetan) was a late-season call-up to the varsity. His younger brother, Charlie, a 6’6” middle, is in his first varsity season.

Aidan is one of three seniors on the roster that includes Carroll and Brian Fitzmaurice.

Even though he doesn’t have extensive on-court varsity experience, Aidan Flynn is enjoying the opportunity to lead a young Mustangs roster.

“I’m just trying to keep up the energy and always keep a positive attitude,” he said. “We’ve all been in this situation and around volleyball so much. We’ve hit a flow lately. We’ve had all the energy on the court and been able to get the job done.”

A state tournament for boys volleyball still remains in question, but there will be, at minimum, regional and sectional rounds.

Whatever happens in the next weeks, Flynn and his teammates are ready.

“It means the world to be able to come out and play and practice every day,” Flynn said. “It’s been awesome. We’re a really tight group. We’re all close friends, so it’s been fun to be able to play every day.”