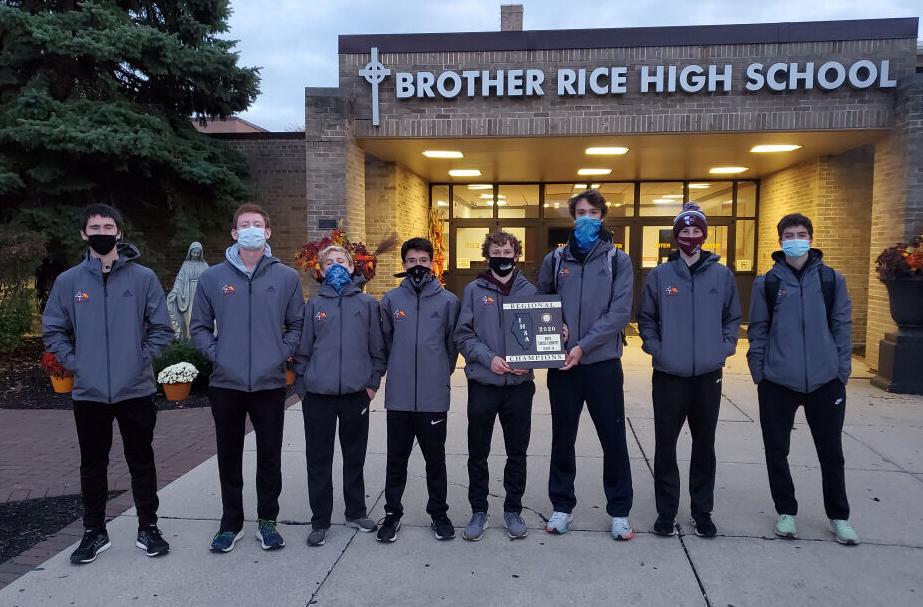 Competing at the Class 2A Ag School regional, Br. Rice won its third straight regional title and fourth in five seasons. The Crusaders will compete on Halloween at the Peoria Notre Dame sectional. (photo courtesy of Tom Wazio) 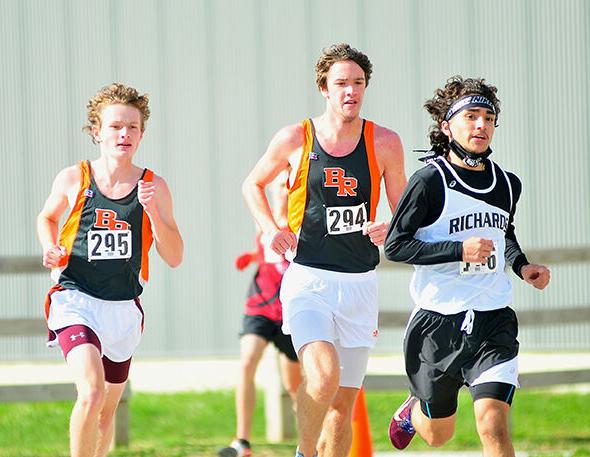 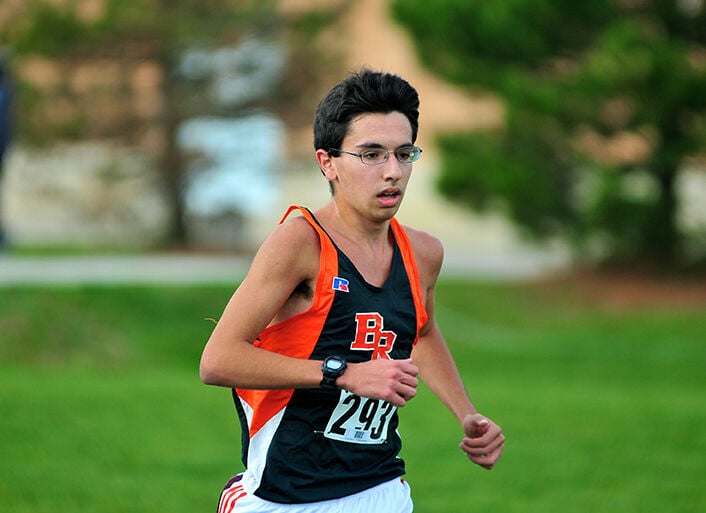 Br. Rice junior Connor Melean races to a seventh-place finish for the Crusaders at the regional meet. Melean (Queen of Martyrs) finished the race in 17:07. (Review photo)

Competing at the Class 2A Ag School regional, Br. Rice won its third straight regional title and fourth in five seasons. The Crusaders will compete on Halloween at the Peoria Notre Dame sectional. (photo courtesy of Tom Wazio)

Br. Rice junior Connor Melean races to a seventh-place finish for the Crusaders at the regional meet. Melean (Queen of Martyrs) finished the race in 17:07. (Review photo)

With a mile to go in the regional race, Eddie Burke and Mikey Corcoran were pushing the pace and feeling good.

The Br. Rice seniors were battling Richards senior David Olmos at the front, the trio going head to head for the entire race until that point.

Then, Burke heard a Richards coach yelling to Olmos.

“There was about a mile left and a Richards coach said, ‘These kids have a kick! Go!’” Burke said. “It’s true. We do.”

Hitting the after-burners over the last mile, Burke and Corcoran pushed the pace even more on the way to their first- and second-place finishes as well as a team regional championship.

Br. Rice (31 points) narrowly beat Richards (36) for top honors on Oct. 24 at the Class 2A Chicago Ag School regional. It was the Crusaders’ third straight regional title and fourth in five years. The top five teams and top five individuals from non-advancing teams qualified for the sectional.

All advancing runners will compete Oct. 31 at the Peoria Notre Dame sectional.

“Winning as a team, it was a really good day for me, Eddie and the whole team,” Corcoran said. “We put in the work this week and all season and executed the plan the coaches came up with. This means a lot for us.”

Burke (Beverly, Christ the King) delivered a dominant final mile on the course that wound around the Ag School campus, finishing the three-mile course in 15:48. Corcoran was close behind in second (16:02).

Burke raced against Olmos at the sectional and state meet a year ago, and Olmos beat Burke at both races.

“Me and Mikey were able to beat Olmos [this year]. He’s a great runner,” Burke said. “He’s beaten me multiple times before. To get him here was pretty nice.”

The race was held in sunny conditions with temperatures in the low 50s.

A dangerous one-two combination all season for the Crusaders, Burke and Corcoran (Beverly, St. John Fisher) capitalized on the conditions to run a gem of a race.

“We felt smooth. Both of us felt really smooth,” Burke said. “We were ready to go and ready to work. That’s every race. It’s going to be difficult, but we’ve got to push through it. Mikey said he felt like he was going to throw up the last mile, but he pushed through it and got second.”

Br. Rice advanced to the Class 2A state meet as a team last season. The sectional meet will close the fall cross-country schedule, but the Notre Dame sectional will be held at Detweiler Park in Peoria, the state meet course.

According to Corcoran, the goals are ambitious.

“As a team, we want to go top three at the sectional,” Corcoran said. “Personally, I want to break 16 minutes. I was 2 seconds off today, so I really want to do that. Today was a personal record, but I want 15.”

Competing at the Ag School regional, the Mustangs will move on as a team to the Peoria Notre Dame sectional with their fifth-place finish (113 points).