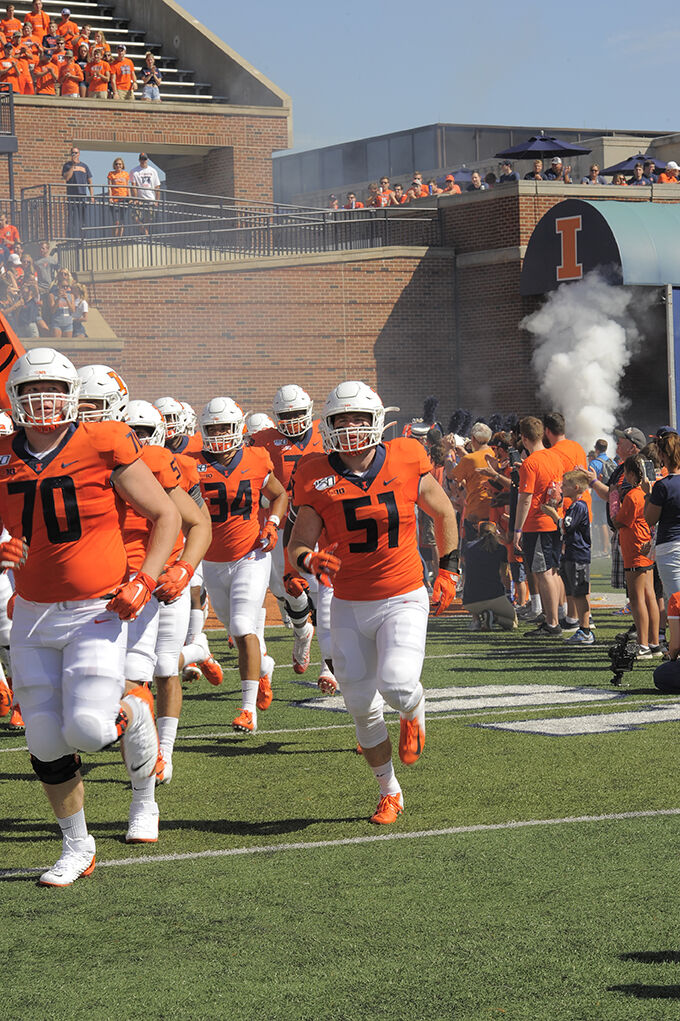 Illinois linebacker Sean Coghlan (51) takes the field for a game in Champaign in the 2019 season. Coghlan is in his senior season at Illinois after a standout high school career at St. Rita. (photo courtesy of University of Illinois Athletics) 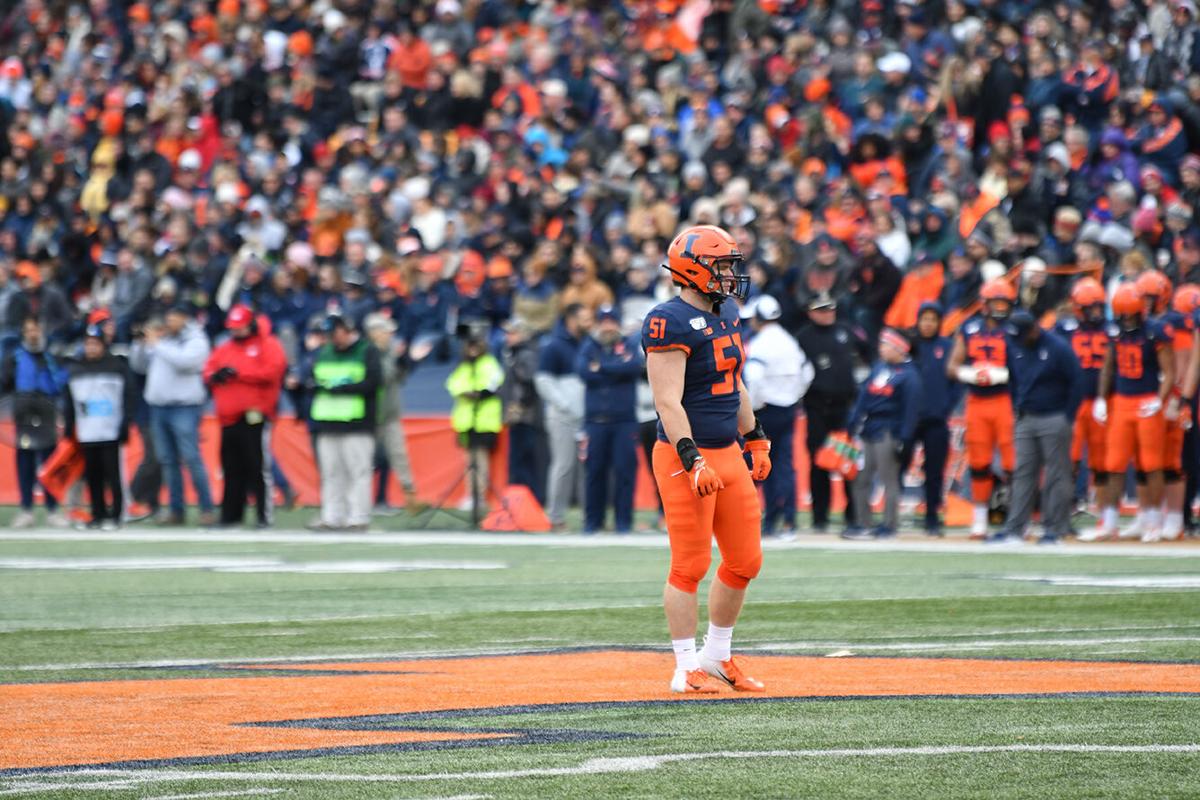 St. Rita alumnus Sean Coghlan was a staple on Illinois’ special teams unit last season and has played in all three of the team’s games this season. (photo courtesy of University of Illinois Athletics) 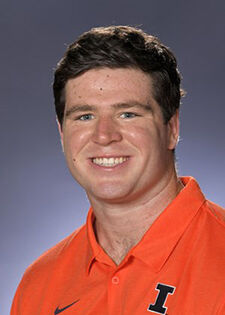 Illinois linebacker Sean Coghlan (51) takes the field for a game in Champaign in the 2019 season. Coghlan is in his senior season at Illinois after a standout high school career at St. Rita. (photo courtesy of University of Illinois Athletics)

St. Rita alumnus Sean Coghlan was a staple on Illinois’ special teams unit last season and has played in all three of the team’s games this season. (photo courtesy of University of Illinois Athletics)

Running onto the football field for the team’s season opener, University of Illinois senior Sean Coghlan knew there’d be a flurry of emotions.

After all, the Big Ten season had already been canceled only to see the conference reverse course in mid-September.

But, football was back.

Coghlan, a St. Rita alumnus, intended to make the most of the opportunity in in recent months.

“It’s definitely been very taxing mentally,” Coghlan said. “All signs pointed to us not having a season, so to play, I’m very happy just to have my redshirt junior year. No extra games are guaranteed. I’m excited to get out and compete.”

Coghlan is a 2017 St. Rita grad. He is a Morgan Park resident and St. Cajetan Elementary School product.

Illinois opened the season on Oct. 23 with a road loss at the University of Wisconsin. The Illini (0-3) will play at Rutgers on Nov. 14.

The Big Ten originally postponed its fall season on Aug. 11 across all fall sports. Then on Sept. 17, the conference announced there would be a shortened fall football season with all teams abiding by strict testing and health guidelines for student-athletes, coaches and everyone involved with the football programs.

Coghlan and his Illini teammates threw themselves back into a practice routine, prepping and working through a six-week training camp of sorts.

“When we heard the good news, you try and get to in-season mode,” Coghlan said. “We had a modified camp and keep working toward being ready for Game 1. We like what we have as a team with talent and a good chemistry, so we’re really excited.”

Coghlan is in his senior year as a student. As a student-athlete in terms of his eligibility, he’s only a redshirt junior after redshirting his freshman year.

He spent that first year in Champaign working out and bulking up.

By his second year, he got on the field, playing in four games while also earning academic All-Big Ten honors.

“I came in during my freshman year in 2017 and redshirted. I was in the weight room a lot just to put on weight and muscle,” Coghlan said. “The next year, you get in the playbook more and try to learn as much as you can so you know everything perfectly when you get out on the field.”

Last year, it all came together for Coghlan, a 6’, 225-pound linebacker. He was a staple on the Illini’s special teams, appearing in 12 of the team’s 13 games.

This season, Coghlan again expects to be a go-to player on Illinois’ special teams unit whether it’s kickoffs, punts or field goals.

“I was playing a lot more last year, almost every game,” Coghlan said. “I’ll help the team however and wherever I can.”

The special teams might not get the attention the offense and defense does, but he and his teammates embrace their roles.

“Everybody on special teams, we’ve got a lot of pride in what we do,” Coghlan said. “It’s a very important, focal part of the game. We want to give the offense and defense good field position. A big play could happen at anytime. Anytime you’re playing in a Big Ten game, it’s exciting.”

Illinois finished 6-7 in 2019 but qualified for a bowl game for the first time since 2014. The Illini lost a tough game to California in the Redbox Bowl in December.

The game was played at Levi’s Stadium, home of the San Francisco 49ers.

But as Coach Lovie Smith and the program continue to improve each season, the bowl game appearance was another step in the right direction.

“It was very important for us because we’ve worked so hard to get to this point,” Coghlan said. “We want to start stacking those up year after year. It was a great experience playing in Levi’s Stadium.”

As for being a part of some program history and getting back to a bowl, Coghlan loved every minute.

“It was amazing. We fell short in previous years,” Coghlan said. “You’d watch these bowl games, and I’d be jealous watching. You’re thinking, ‘We should be out there playing.’ I’m happy for us to see where we’ve progressed as a program.”