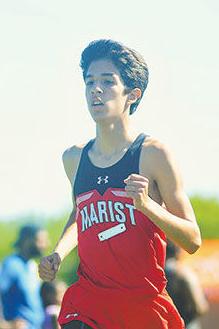 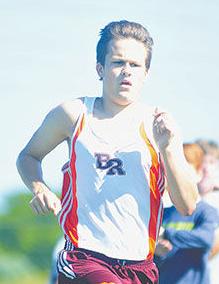 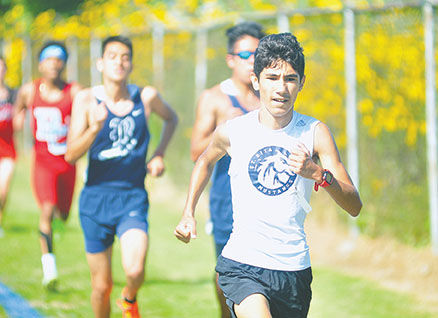 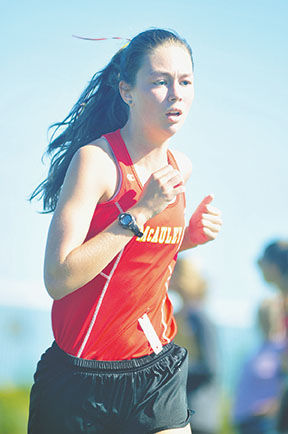 Competing at the Reavis Rams Cross-Country Invitational, Marist was without star senior Thomas Leonard who was on a college visit.

However, this year Marist isn’t a one-man team because the RedHawks have some serious depth.

“We think it could be a big year,” said senior Caleb Davis. “With all the forces we have, these great sophomores, with Thomas and everyone pushing, we have a shot at winning conference and regionals and see where we go from there.”

Davis, a team captain, said the RedHawks put in the miles during the spring for track and during the summer offseason.

“We made it a priority to get together as much as we could with everyone’s crazy schedules,” Davis said. “We wanted to practice, push and work together. That’s where you saw the growth from last year. It was something to see.”

During his first season running cross-country last year, Jimmy Maguire was tested in his first race, battling the notorious hill on the course at Reavis.

He remembers it all too clearly, but he definitely got the best of the hill this year.

“I remember dying going up that hill. I was dying today, but I’m able to push and keep going,” Maguire said with a laugh.

Maguire joined the team as a junior, following in his brother Patrick’s footsteps. Now with a year under his belt, he wants to make the most of his senior year.

Junior Eddie Burke (17:19) finished 12th, and with Maguire, he is part of a solid one-two punch for the Crusaders.

“I pushed it too much at times last year and didn’t push enough other times,” Maguire said. “We’re going to be pretty good. Eddie’s a great runner. We’re great training partners all the time. We’re always trying to one-up each other.”

Through his freshman and sophomore years, Raul Garcia played soccer in the fall, trained in the winter and ran track in the spring.

However, after some encouragement from his family—and with the running gene in his blood—Garcia went out for the cross-country team this year.

“I’ve been running since I was 8. I started with 5Ks with my parents and then have been building up,” Garcia said. “It’s my first year running cross-country, but the races have been pretty good. I felt really good today.”

On top of his cross-country training, Garcia is also training for the Chicago Marathon in October, his first marathon.

“I saw my parents [Joshua and Marisol] do the Chicago Marathon, so when I was 12 or 13, I made that commitment to myself,” Garcia said. “It’s the first year I am eligible, and luckily enough, I was selected from the lottery.”

A staple in the RedHawks top-seven runners for three seasons, Amanda Tracy was ready to get her senior season going.

And then it hit her; this would be her last season in high school.

“Going into my senior year, it’s obvious, but you realize it’ll be your last time running each course,” Tracy said. “I want to go out there and do what I can for my team and leave it all out there. I want to do better than last year and help my team any way I can.”

Along with several graduated top-seven runners, Marist lost another key runner who did not come out for the team this fall, and returning state runner Nora McClorey is out early with an injury but is expected back soon.

With so many spots up for grabs, Tracy has cemented herself as Marist’s top runner.

Tracy battled to stick with the lead runners and their lightning pace.

“I tried to get out to the front pack as soon as possible,” Tracy said. “I kind of lost contact, so I tried to stay focused and keep my mind on the race. I tried to move forward with any group I could.”

Battling through a tough race, junior Natalie Wagner was dedicated to making the best of her run.

“I wasn’t feeling that good,” Wagner said. “I wanted to focus on passing people on the hill with the chances you get. That second time going down, you’re pretty close to the finish. I really wanted to go down and get momentum for a strong finish.”

The Mighty Macs finished fifth (183 points) in the team standings.

Wagner said the young lineup is beginning to find its way early in the season as the team deals with some minor injuries.

Junior Caitlin Bitjunac finished in 35th (22:17) for the Cyclones.