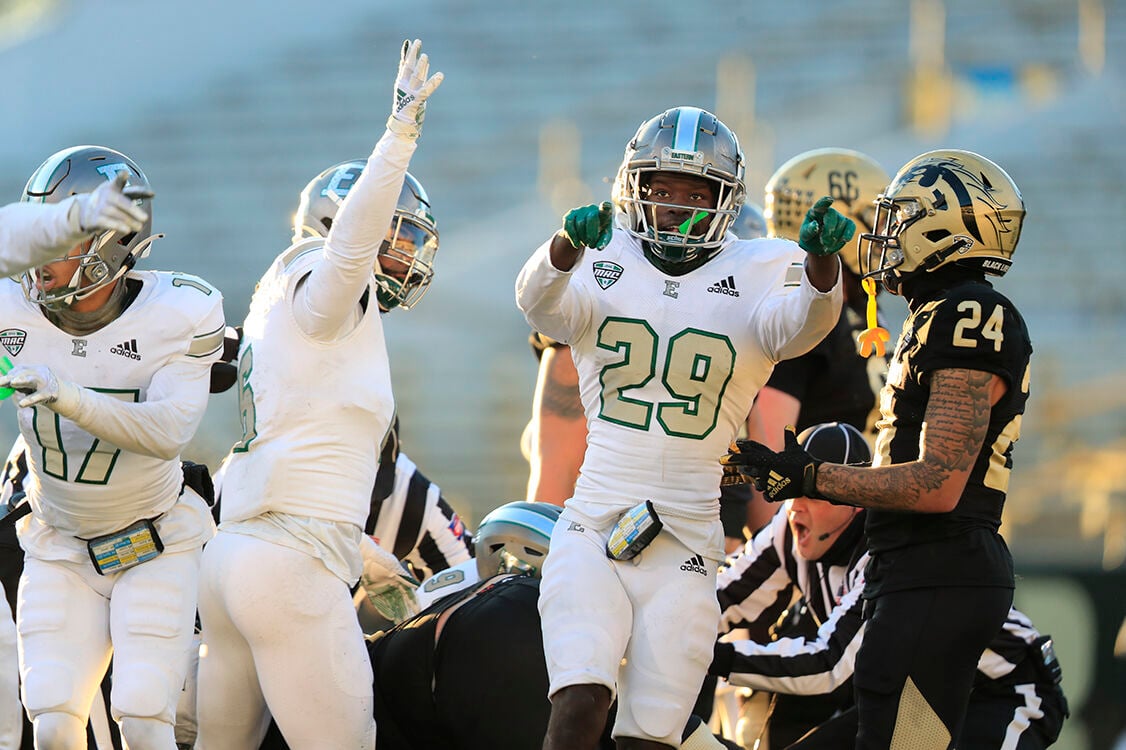 Kempton Shine, a 2019 St. Rita grad, started 4 games at defensive back for Eastern Michigan this fall, appearing in all 6 of the team’s games. (photo courtesy of Eastern Michigan Athletics)

Kempton Shine, a 2019 St. Rita grad, started 4 games at defensive back for Eastern Michigan this fall, appearing in all 6 of the team’s games. (photo courtesy of Eastern Michigan Athletics)

Playing in his freshman year in 2019 at Eastern Michigan University (EMU), Kempton Shine got his chances.

He appeared in four games at defensive back, including making 4 tackles in an Eagles win over Central Connecticut.

In fall 2020, Shine was a breakout performer defensively for EMU, earning a starting role at defensive back and not looking back.

“It was all about production when I got into the games,” Shine said. “I was able to have some high numbers in tackles, a fumble recovery, some slip-ups but some break-ups. It’s like high school. It’s a different level, but it’s what you do with [the opportunity].”

Shine played in four games in his freshman season, including a start against Illinois, but he was able to redshirt, meaning the year did not count against his eligibility.

This year, his redshirt freshman season, was played under the cloud of the pandemic, but EMU and the entire Mid-American Conference (MAC) were able to complete a shortened season.

Playing solely against MAC teams, EMU went 2-4, starting the season on Nov. 4 against Kent State and wrapping up the year on Dec. 12 with a home win against Northern Illinois.

While many teams nationwide were forced to cancel games due to COVID-19 protocols, the Eagles played all the games on their slate.

“Things were tough throughout the year,” Shine said. “You’re waking up early to go get COVID tests, and you’re following a lot of different guidelines for classes. If you had a headache, sit out for a day. You’re not going out. You want to stay as healthy as possible. We had football, though.”

When Shine and his teammates were finally able to take the field, the 5’11”, 182-pound defensive back made the most of it.

He played off the bench against both Kent State and Ball State and then earned the start in EMU’s third game, a tough loss to Toledo. Shine finished with 6 tackles and a pass break-up in the start.

“I expected to come in with a starting role [this year],” Shine said. “The first game this year, I was kind of nervous. We had a couple injuries this year, so I moved up the depth chart. I tried to take advantage and prove that I could do it.”

Shine was a force a week later on Nov. 27 in a close loss to Central Michigan, piling up an impressive 14 tackles and also recovering a fumble.

“I think the coaches saw the potential in me,” Shine said. “I think I gained their confidence. Every time I got out there and the play was toward me, I wanted to be productive. I want to defend the other team’s number-one wide receiver.”

Shine finished with 36 tackles, 2 pass break-ups, a fumble recovery and a forced fumble in his breakout campaign with the Eagles.

He’s hoping it’s another step toward his dream of playing in the NFL one day as he follows in the footsteps of his favorite players, including the Buffalo Bills’ Tre’Davious White, the New England Patriots’ Stephon Gilmore and the Arizona Cardinals’ Patrick Peterson. On the other side of the ball, Shine identified two wide receivers, the Buffalo Bills’ Stefon Diggs and the Atlanta Falcons’ Julio Jones, as two of his favorite players.

Shine is hoping the opportunity to pursue his NFL dream is on the horizon. However, he’s not looking too far ahead in the meantime.

In his offseason, he said, he wants to strengthen his legs and continue to work on increasing his speed, agility and all-around ability.

“I’ve been dreaming of playing football professionally for years,” Shine said. “I have the potential to go and do it. You stay sharp. I want to compete every time I’m out on the field.”