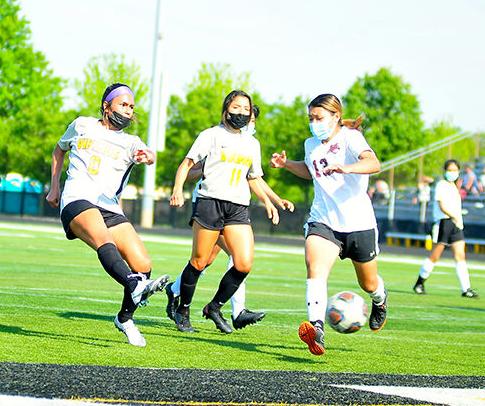 St. Laurence junior midfielder Jocelyn Ruiz fires a shot for a goal that put the Vikings up 2-0 early in the first half in a regional semifinal victory over Back of the Yards. (Review photo) 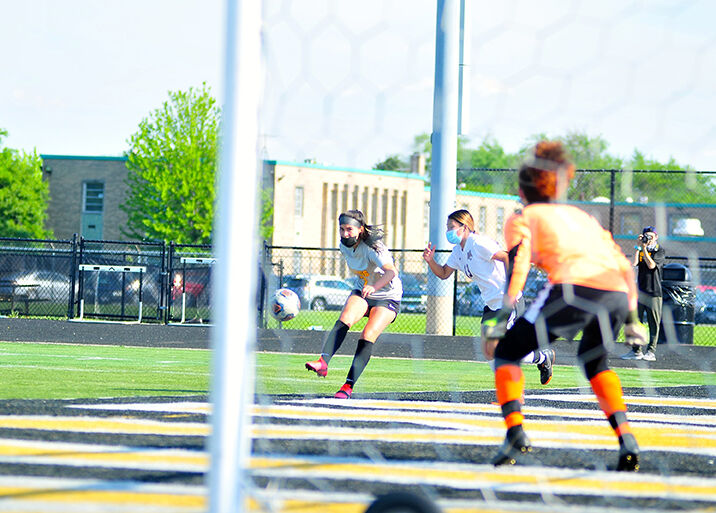 St. Laurence sophomore Emily Garcia curls a kick in from the left side for a score. Garcia has been a team leader for a young Vikings squad. (Review photo) 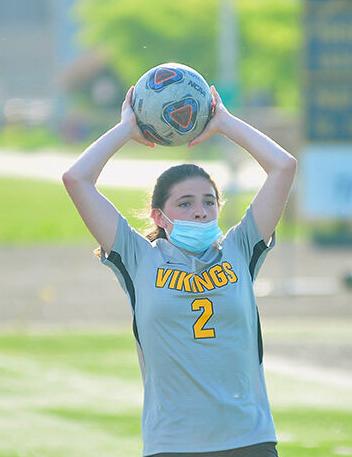 St. Laurence freshman midfielder Kathleen Martin throws in the ball in the second half. Martin has been a key defender for a stingy Vikings defense. (Review photo)

St. Laurence junior midfielder Jocelyn Ruiz fires a shot for a goal that put the Vikings up 2-0 early in the first half in a regional semifinal victory over Back of the Yards. (Review photo)

St. Laurence sophomore Emily Garcia curls a kick in from the left side for a score. Garcia has been a team leader for a young Vikings squad. (Review photo)

St. Laurence freshman midfielder Kathleen Martin throws in the ball in the second half. Martin has been a key defender for a stingy Vikings defense. (Review photo)

Two years ago, St. Laurence junior Jocelyn Ruiz was a freshman on the soccer team that helped make program history.

The Vikings won a Class 1A regional title, the first in the program’s short history since the school went co-ed in 2017.

Now, Ruiz is a veteran midfielder on a young squad with no seniors on the roster.

However, as the Vikings have shown this season, a lack of experience wasn’t much to worry about.

Hosting a Class 2A sectional preliminary match on June 1, St. Laurence defeated Back of the Yards (BTY) 4-0 to open the playoffs.

“We’re all trying to step up as a team,” Ruiz said. “It doesn’t matter what grade you’re in. Anyone can be a leader, so try your best all the time.”

Ruiz, junior Avery Geigner and sophomores Jazmin Ramirez and Emily Garcia scored a goal apiece in the Back of the Yards victory.

St. Laurence advanced to play three-seed Nazareth Academy on June 4 in the sectional quarterfinal, pulling off the upset with an exciting 1-0 victory in LaGrange Park. Sophomore Emily Garcia scored the lone goal with junior Vanessa Jones providing the assist.

Roche delivered with a huge day in net with several key saves.

St. Laurence lost at Nazareth 4-0 early in the season.

“We had to go out [today] and act like it’s 0-0 and we never played before,” Garcia said. “We played really good that first game, but we made some stupid mistakes we can clean up.”

St. Laurence (12-6-3) played at St. Ignatius on June 8, after press time, in a sectional semifinal matchup. The Wolfpack defeated Hinsdale South 4-0 in the quarterfinals.

With no senior female students in the school’s Class of 2021, St. Laurence Coach Jaime Alonso came away impressed with his young squad’s ability to grow as a group.

“Throughout the year, we’ve had growing pains. We’ve got to learn from these mistakes,” Alonso said. “The way you improve as a team is acknowledging them as a team, fixing them and make sure they don’t happen twice.”

With only juniors, sophomores and freshmen on the roster, Alonso encouraged the Vikings to take advantage of the opportunity as a young core clicked.

“It’s not an excuse that we don’t have seniors, so don’t wait until you’re a sophomore, junior or senior to be great,” Alonso said. “We have a good mix of athleticism and experience where we can give a lot of teams trouble when we’re concentrated and composed.”

Against BTY, St. Laurence left no doubt early as the Vikings set the tone with 3 goals in the game’s first 9 minutes.

Ramirez opened the scoring with a straight-on shot from 25 yards out, spinning and firing a pretty shot that snuck under the post.

Two minutes later, Ruiz tallied her own as she worked with teammates on several quick, short passes to set up the shot.

Ruiz blasted a shot in the box from the right side to the left post.

“We obviously want to start out strong and end the game strong,” Ruiz said. “It’s important to get that first goal within 5 minutes if you can.”

Garcia capped the early scoring outburst with a pretty score on an angled shot from the left side to the right post over the Bobcats goalkeeper.

Dominating possession for most of the game, St. Laurence didn’t allow BTY many scoring attacks.

When the Bobcats did break through, the defensive backline of freshman Kathleen Martin (Mt. Greenwood, St. Catherine of Alexandria) and juniors Heidi Chacon and Vanessa Jones quickly cleared the ball.

“It’s our communication I think,” Martin said. “Heidi and Vanessa have done a really good job leading the whole defense back there.”

Martin has been a consistent defensive presence all season for St. Laurence.

She’s welcomed her return to the field, especially as a freshman starting on the varsity team.

“It was a little strange playing because at St. Catherine a bunch of kids quit soccer in sixth grade,” Martin said. “I hadn’t played in about two years. It was nice to get back into playing soccer and really exciting.”