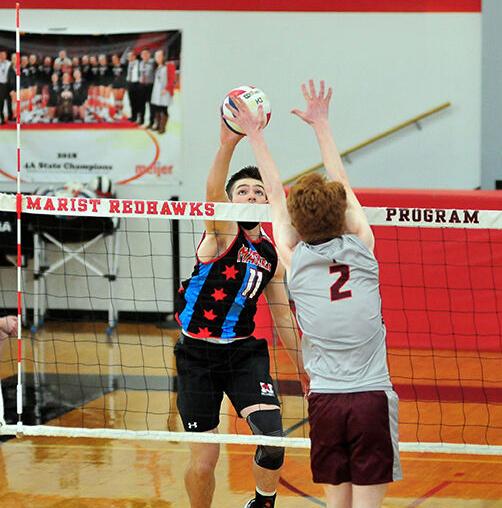 Marist junior outside hitter Kellen O’Keefe works to hit past the Br. Rice block in the first set. O’Keefe finished with 5 kills and 2 blocks for the RedHawks. (Review photo) 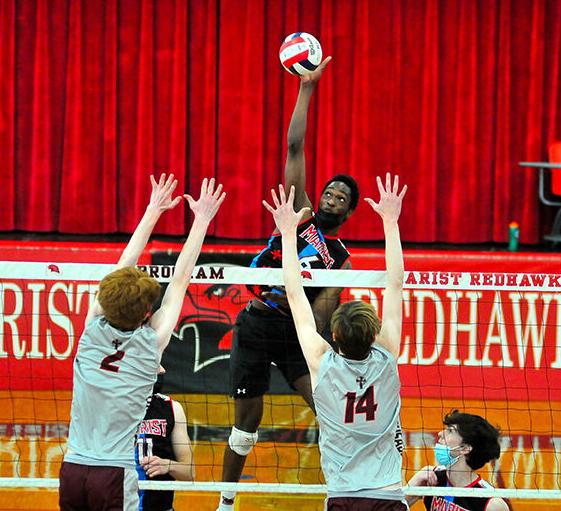 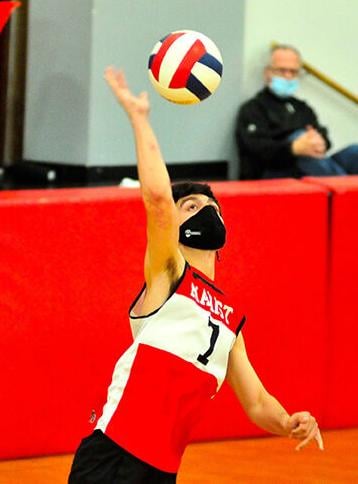 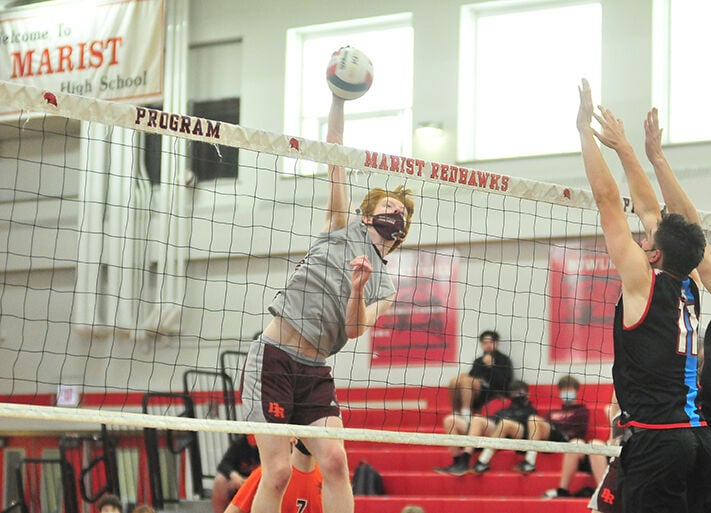 Marist junior outside hitter Kellen O’Keefe works to hit past the Br. Rice block in the first set. O’Keefe finished with 5 kills and 2 blocks for the RedHawks. (Review photo)

Marist junior outside hitter Kellen O’Keefe could feel the momentum shifting in a big way.

After pulling away late in the first set for a win against rival Br. Rice, the RedHawks left no doubt in the second set, unleashing waves of blocks and kills and a strong service game.

Marist was on a roll.

Continuing its hot start and improving to 9-0 overall, host Marist defeated Br. Rice 25-17, 25-14 on May 5 in a nonconference rivalry match.

“You can tell when we get a big swing or a big block. It’s definitely a big momentum switch,” O’Keefe said. “Everyone feels it. We rolled a couple big plays with [Matt Monahan] serving, and it gets everyone even more hyped.”

Senior outside Nyherowo Omene powered the RedHawks with 10 kills, 2 blocks and 2 aces.

As Marist navigates the last month-plus of the season, O’Keefe and his teammates know it will be important to develop an offensive attack around Omene.

A Princeton recruit, Omene is a 6’8” outside hitter and one of the best, if not the best, hitter in the state. However, if opponents throw two or three blockers at Omene, O’Keefe and the RedHawks are at the ready.

“If we keep our hitters diverse, I feel like we’ll have a better chance. Not to say we shouldn’t set Nyherowo,” O’Keefe said with a laugh. “It’s great to keep our lineup diverse. I’m trying to fill my role and play my spot being as consistent as I can. I’m trying to be a smart player and keep consistent with my form and technique.”

Marist Coach Jordan Vidovic said the team’s depth at the hitting positions is impressive. It’s just a matter of some of the young RedHawks gaining some experience.

O’Keefe, Vidovic said, has been one of several hitters who has stepped up.

“We definitely have the physicality with other guys. It’s a work in progress for us to balance out the offense,” Vidovic said. “Our right-side hitters, [Kyle Pietrzak] and [Marty Canavan], they can really balance the court out for us, keep blockers honest and find some looks.”

Omene was a middle blocker on the 2019 state championship team and the lone returning starter back this year for the RedHawks.

He has worked hard to expand his role from a middle blocker to a six-rotation player who never leaves the court, hitting, blocking, serving a ferocious jump serve and playing defense in the back row.

Omene credits the team’s efforts in practice rolling over into matches as the varsity newcomers find their roles.

“The mentality we set from the beginning is to work as hard as you can, especially with our new guys. You make sure you push yourself to your limits and go all out,” Omene said. “You never know when your last match will be. Then, when we face 20-20 games, 23-23 games, we don’t fold. We stick to our basics and stick with it.”

O’Keefe scored 4 of his 5 kills in the second set.

“Kellen is a workhorse. He’s a solid kid, a weight room kid, a Pat Mahoney-type kid,” Vidovic said. “He’s excelled with his possibilities through his strength and physicality. His last appearance was freshman A volleyball two years ago. Working through it and having Nyherowo guide him, it’s nice to have that.”

Senior libero Matt Monahan finished with 8 digs and 2 aces, including a strong service run early in the second that sparked the RedHawks.

Marist went up 8-2 and never looked back, going up by 13 points late.

Monahan is one of five St. John Fisher alums on the team, including O’Keefe, Kevin and Marty Canavan and Neil Riggio (12 assists, 7 digs).

“When I’m serving, it’s just picking out the defender I want to serve to and making him mess up,” Monahan said. “Once we got that going, we were in control. It’s a momentum thing. When you’re serving like that and keep going, it’s fun. We stayed in control and got set on our defense.”