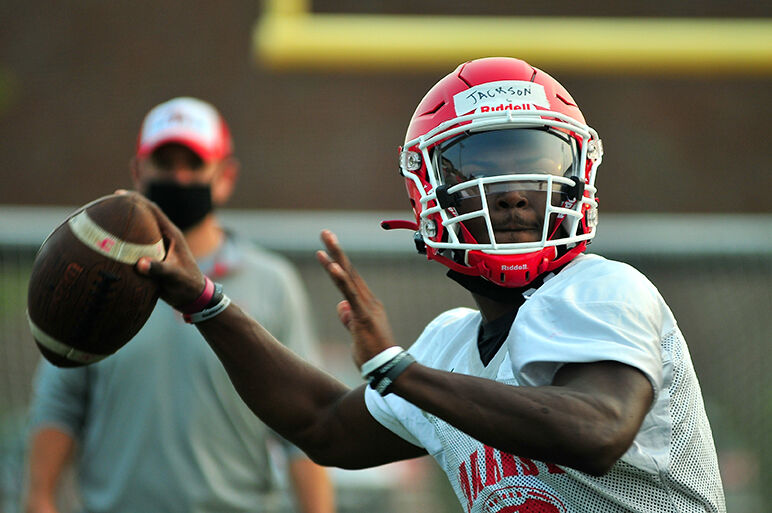 Marist junior quarterback Dontrell Jackson Jr. looks for an open receiver during a contact day this fall with his teammates. (Review file photo) 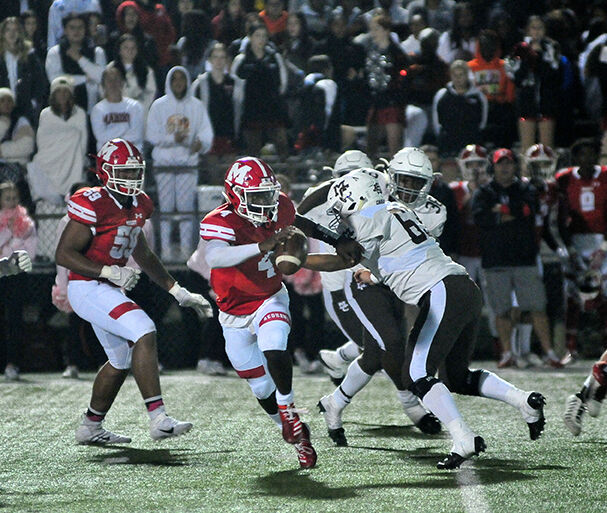 Marist quarterback Dontrell Jackson Jr. scrambles out of the pocket against Mt. Carmel during a game in 2019. Jackson split time at quarterback with Hayden Mikesell (Western Michigan) during his sophomore year. (Review file photo) 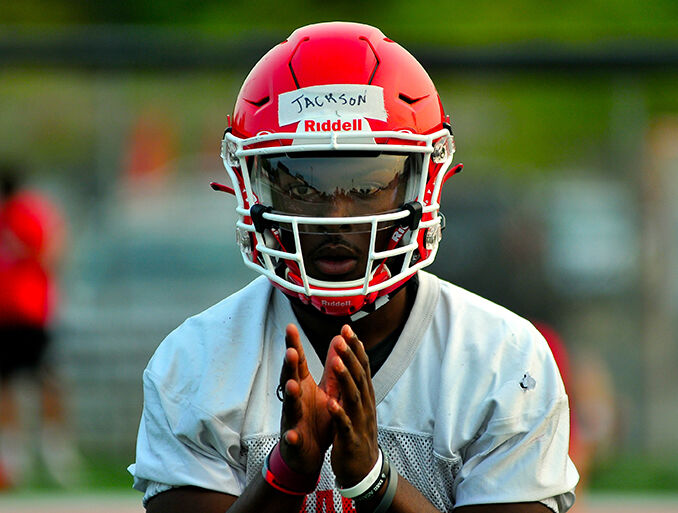 Marist junior quarterback Dontrell Jackson Jr. looks for an open receiver during a contact day this fall with his teammates. (Review file photo)

Marist quarterback Dontrell Jackson Jr. scrambles out of the pocket against Mt. Carmel during a game in 2019. Jackson split time at quarterback with Hayden Mikesell (Western Michigan) during his sophomore year. (Review file photo)

Dontrell Jackson Jr. has heard all the doubts about his height.

At 6-feet tall, the Marist junior quarterback doesn’t have the perceived build of a next-level quarterback, but Jackson is always ready to prove himself.

He will get his chance at the next level after verbally committing in November to Coastal Carolina University in Conway, S.C.

“When I hear someone talk about my height, I use it as fuel,” Jackson said. “I try to go way harder when I hear that. If I’m not the best quarterback in the Class of 2022, I’m right there. I’m not cocky; I’m just confident. No matter my height, I’m going to be one of the most accurate passers around.”

Jackson, a 6-foot, 183-pound quarterback, visited Coastal Carolina this fall and fell in love with the school, the football program and the atmosphere.

The Chanticleers had a successful campaign this fall, going 11-1 in a breakout season that saw the team ascend into the national spotlight.

“It’s just the culture I liked and mainly the coaching staff,” Jackson said. “I was looking for a school that was really interested in me. I liked the atmosphere and the whole place. It felt like it could be the school for me. I loved it.”

In his sophomore year at Marist in 2019, Jackson split time at quarterback with senior Hayden Mikesell, now at Western Michigan University.

Jackson played in 10 games, throwing for 466 yards and 4 touchdowns, and he rushed for 229 yards and a score. He also had 12 receptions for 65 yards and a touchdown.

While it was tough to sit at times, Jackson said, he tried to make the best of it as the RedHawks navigated one of the toughest schedules in the state.

“My sophomore year, I was 15 years old,” Jackson said. “That Lake Zurich game was ridiculous [a 24-17 Marist win in overtime]. My first year starting on the varsity, I wasn’t scared, but you’re a little nervous. I’m definitely more confident now in my decisions. I learned a lot.”

All the little things helped.

Playing at wide receiver, Jackson saw the game through the eyes of his receivers, adding a new dimension to his skills at quarterback.

He talked often with Mikesell, picking his brain when he could.

“[Splitting time] I tried to handle it positively and never get down or be negative,” Jackson said. “If the coaches gave us a list of things to do, I wanted to put my best foot forward and give it 110 percent. That’s all you can do.”

Jackson stayed patient and kept working. After all, he knew his junior and senior seasons were still ahead of him.

Then, due to the COVID-19 pandemic, his junior season was pushed back from its normal fall season to a new winter/spring schedule.

The 2020-21 football season is scheduled to begin in mid-February, but the timeline could change as the Illinois High School Association (IHSA) works with state health officials to formulate a new sports schedule.

Jackson has stayed busy on the football circuit, including attending a Rise & Fire camp in Dallas, Texas, in December that featured some of the top recruits from the classes of 2022, ’23 and ’24.

With no game footage yet from his junior year, Jackson recorded his workouts throughout 2020, making sure to post them on social media and Hudl, a recruiting website, to continue to get his name out there.

“It’s not pressure to perform [at those camps],” Jackson said. “It’s another workout. You’ve got to take all these reps seriously, like game reps. You calm down and don’t be nervous. If you’re sailing a ball high or low, step back. You make sure everyone is on the same page.”

Jackson and his RedHawk teammates remain in a holding pattern with the start of the season potentially around the corner.

He hopes that athletes statewide get a chance to take the field.

“I’m praying we have a season,” Jackson said. “This is the year for us. We have all the tools to win the state championship. I hope the IHSA has a plan to let us play. I’m trying to take it day by day, stay positive, focused and ready and prepare myself.”