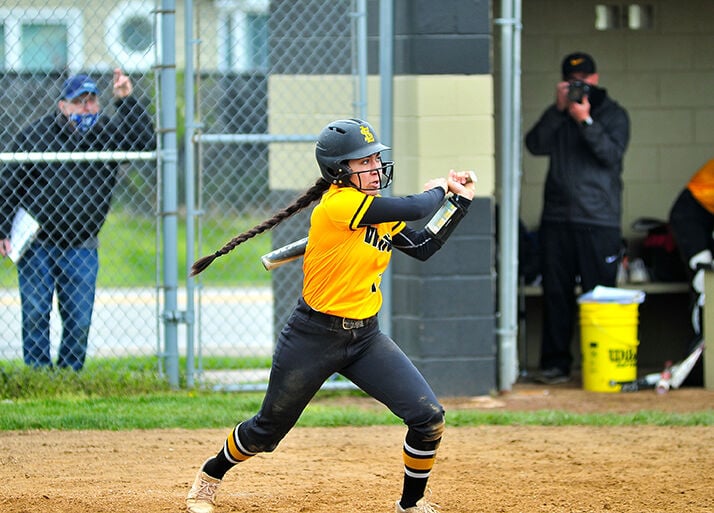 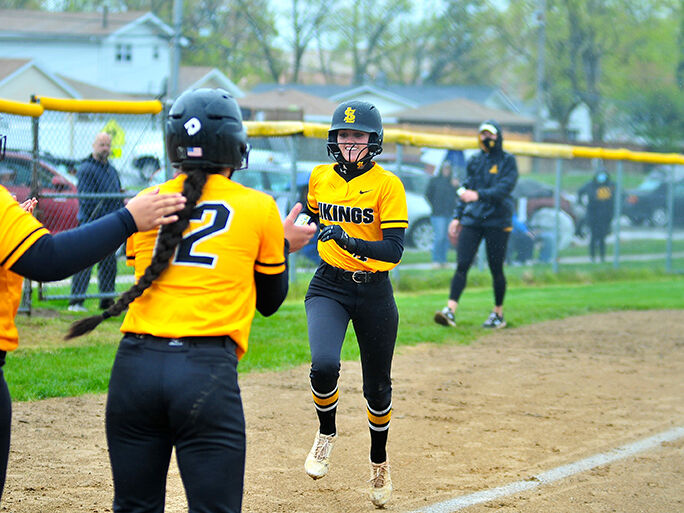 Sophomore Maddie Lipinski is cheered by her St. Laurence teammates after her first-inning home run. Lipinski went 3 for 5, coming up a triple short of the cycle. 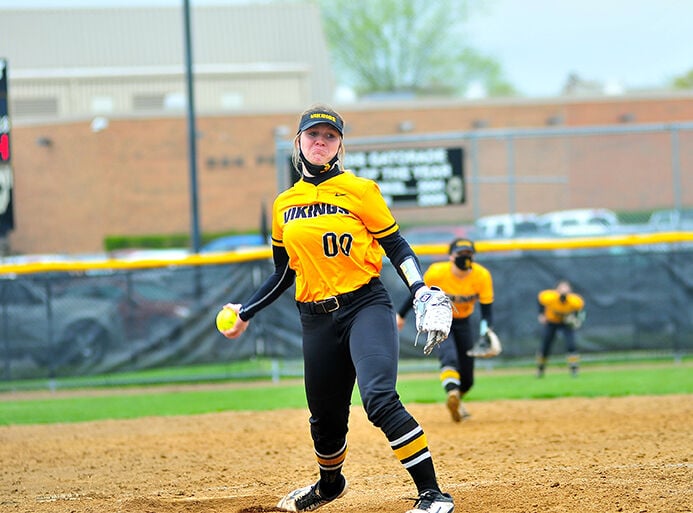 Sophomore Maddie Lipinski is cheered by her St. Laurence teammates after her first-inning home run. Lipinski went 3 for 5, coming up a triple short of the cycle.

Angelina Seropian walked up to the dish in the top of the first with 2 runners on and no outs.

The St. Laurence junior third baseman had watched as Emma Lotus and Fiona Sjostrom drew walks to start the game.

Seropian knew to be cautious and not force anything, but still, if the right pitch came, she was ready to rip.

“A lot of batters, if they see walks in front of them, they think, ‘OK, I’ll walk, too.’ For me, if that first pitch is right down the middle, I’m going to try and jack the ball somewhere,” Seropian said with a laugh. “Once I saw the pitch, I knew I was going.”

Seropian blasted a double to straightaway center, bringing Lotus and Sjostrom home, and the Vikings were off and running.

Racking up 16 hits on April 24, St. Laurence rolled to a convincing 20-4 victory in 5 innings over host Oak Forest in a nonconference matchup.

Seropian, a Bucknell University recruit, finished with 2 RBI and 2 runs.

The Vikings improved to 2-1 with the win after losing earlier in the week to Stagg 9-8 and beating St. Ignatius 13-2.

For the Vikings, every batter in the lineup is a threat.

“The girls know that, if we keep hitting in our spots, our top hitters can get 5 runs, and then the bottom of the lineup can get 5 runs, too,” Seropian said. “It’s the best lineup we’ve had.”

Sophomore Maddie Lipinski followed up the 2-run double with even bigger fireworks. The left fielder blasted a 2-run shot to right field, and St. Laurence went up 4-0.

“I was ready when I stepped in the box. I was ready for my pitch, and I got it,” Lipinski said. “I took an aggressive path on a fastball inside. I knew it was gone.”

Lipinski would have played for the varsity as a freshman, but she never got the chance due to the pandemic canceling the spring season.

Now, she’s one of six sophomores on the varsity who are making up for lost time and enjoying their high school debut. Lipinski finished a triple shy of the cycle, finishing with 3 hits, 3 runs and 3 RBI.

“It’s been weird being back, but we were all ready to go and super-excited to play,” Lipinski said. “I was nervous but really excited to play with these girls again. We had a good first week.”

After Oak Forest responded with 3 runs in the bottom of the first, St. Laurence blew up for 9 runs in the second.

The Vikings added 2 more in the third and a 5-spot in the fifth.

“[Our lineup] is pretty scary,” Lipinski said. “Everyone is super-strong and confident.”

With a nice mix of veterans and newcomers, Seropian said, the Vikings have the talent to put together a winning campaign.

St. Laurence doesn’t have a girls senior class yet, so all its girls teams lack the senior leadership its competitors enjoy. Nonetheless, the Vikings are stepping up.

“Our juniors kicked it up a notch and took that senior lead,” Seropian said. “We’ve got one year under our belt. We’re trying to help the younger girls get the gist of varsity practice and how fast we move as they get that experience. We’re trying to take a step forward.”

Entering the game in the first inning for St. Laurence, junior Abbey Pochie delivered a solid performance in the circle to pick up the win. She allowed 1 run on 3 hits and 2 walks with 8 strikeouts in 4.2 innings.

In preparing for a start, Pochie (St. Cajetan) knows she doesn’t need to pitch a shutout. The defense has her back.

“I’ve known most of these girls since I was 10 or 11. I know their capabilities,” she said. “I know they put in the work in the offseason. It’s nice to know if I give up a couple runs, they can answer right back with even more runs.”

Pochie was a force in the circle as a freshman two years ago, and now that she’s back on the field, she’s ready to excel for the Vikings.

“It’s definitely special to be back. We’re definitely lucky,” she said. “This is a great group of girls. We put the work in, and we’re fortunate to be out here together again.”

Looking for 2- to 3-person office