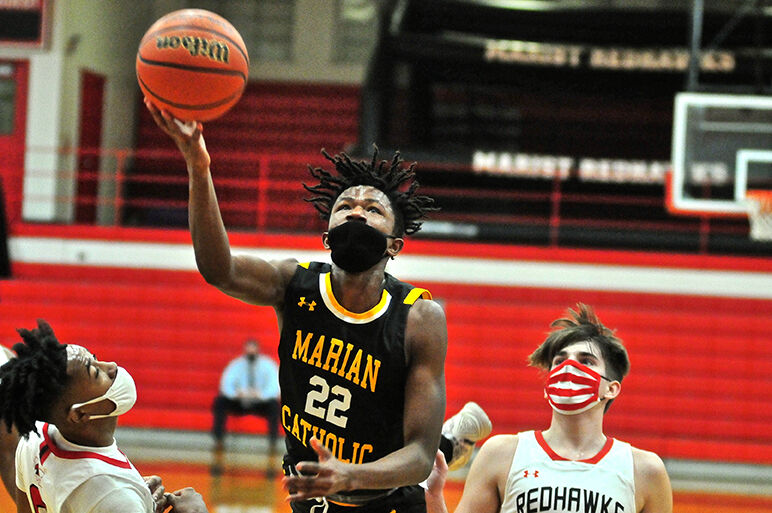 Marian Catholic junior guard Jeremiah Jones goes up for a shot in traffic. Jones finished with 20 points and 9 rebounds for the Spartans in a season-opening win at Marist. (Review photo)

Marian Catholic sophomore Tre Davis makes a move against a defender on the wing. Davis finished with 7 points for the Spartans, including 2 free throws late in the game against Marist. (Review photo) 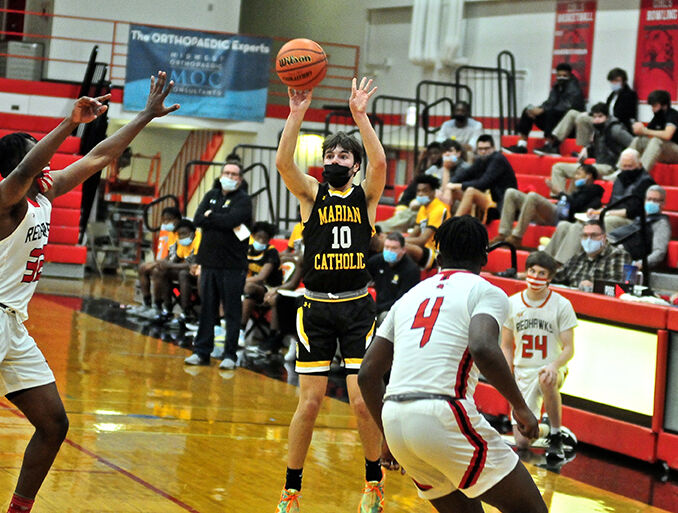 Marian Catholic senior Tom Klupchak launches a 3 from the wing against the RedHawks. Klupchak scored 5 points for the Spartans. (Review photo)

Marian Catholic junior guard Jeremiah Jones goes up for a shot in traffic. Jones finished with 20 points and 9 rebounds for the Spartans in a season-opening win at Marist. (Review photo)

Marian Catholic sophomore Tre Davis makes a move against a defender on the wing. Davis finished with 7 points for the Spartans, including 2 free throws late in the game against Marist. (Review photo)

Marian Catholic senior Tom Klupchak launches a 3 from the wing against the RedHawks. Klupchak scored 5 points for the Spartans. (Review photo)

Last year as a sophomore for Marian Catholic, Jeremiah Jones played a key supporting role off the bench.

With an uber-talented starting lineup in front of him, including his older brother, Elijah, Jones did anything he could to help the Spartans.

Now a junior, Jones has expanded his role in a big way.

“Last year, we had a great team,” Jones said. “It pushed me really hard to show that I can play, too. I can produce just like last year but produce even more. I elevated my scoring and a leadership role as a player to be the number-one option on the team. I feel a lot stronger. I feel like I can score at will.”

Against Marist, Jones, a 6’2” guard, showed off his all-around game, including scoring 8 points in the second quarter as Marian pulled away. In the second half, Jones added some timely baskets, scoring 7 straight points in the third and drilling a wing 3-pointer early in the fourth.

“First quarter, Jeremiah started off slow, but we talked about matchups and being aggressive,” Taylor said. “He has to get other guys into the game. He did that. Jeremiah had a really nice game.”

Jones will be important this year for a young Spartans team as Marian Catholic started three seniors against Marist, along with Jones and sophomore guard Tre Davis. However, Taylor also has a ton of young talent on the bench.

“We have three seniors who are great kids. They’ve done a great job leading us,” Taylor said. “They know we’ve got some good young kids here and at the sophomore level. Quentin did some good things; Smith did a great job, and Tre is a bulldog.”

Davis, a 5’9” guard, showed off his clutch gene in the game’s final minute, drilling 2 free throws with 18 seconds remaining to put Marian Catholic up 49-44.

Last year as a freshman, Davis was a midseason call-up to the varsity. When he hit the key free throws against the RedHawks, he couldn’t help but remember a similar situation last season that had a different outcome.

“Last year on JV against Marist, we were down 3. I got fouled shooting a 3,” Davis said. “I hit 2 and missed the last one that would have sent us to overtime. I was thinking of that a little, just stay calm, breathe and do what I know I can. We practice free throws every day. It’s muscle memory, so stay with it.”

Marian Catholic was one of three area boys basketball teams, including Morgan Park and St. Ignatius, that were set to play in a sectional championship last March only to see the remainder of the state series canceled due to the pandemic.

Even though this year’s shortened season will not feature a postseason series at the state level, Jones and his teammates are still glad to be back in action.

“It was devastating last year. We thought it was our ring season,” Jones said. “It’s been so long since this team came together and played. We played hard today, executed and got the win.”

The stars of the 2019-20 squad, including Elijah Jones (Southern Indiana), Ahron Ulis (Iowa) and Yemi Elutilo (Lewis), are now playing at the collegiate level.

For Jones and his Spartans teammates, their goal is to make the most of the shortened five-week season.

“I’m very excited for next year where there could be a state tournament,” Jones said. “I could see us going very far. The experience we’re going to get now, I’m excited. Get all the turnovers and bad shots out of the way this year. We’ll still be competing this year and try to win conference.”