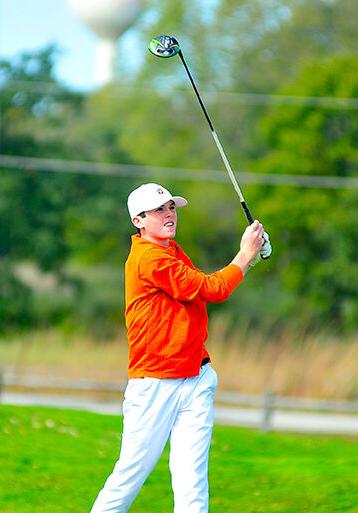 Br. Rice senior Quinn Clifford follows his tee shot at No. 18. Clifford shot 79 at the regional meet, advancing to the sectional as an individual. (Review photo) 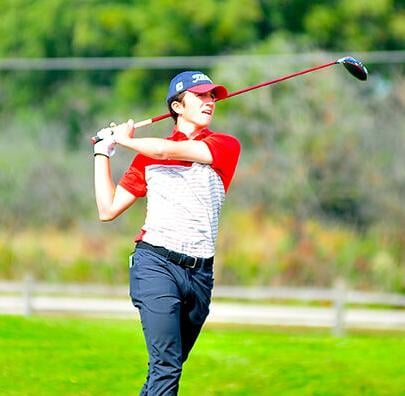 St. Rita senior Aidan Connolly tees off at No. 18. Connolly shot 84 at the regional and was one of four advancing individuals to the sectional. 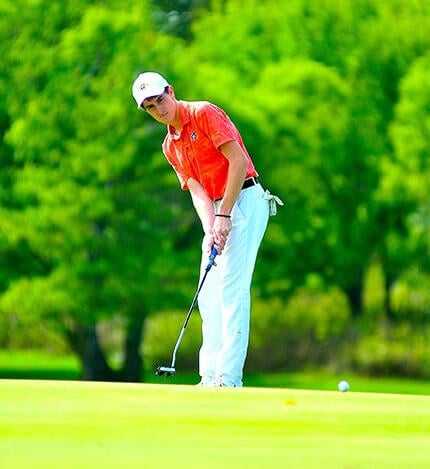 Br. Rice senior Mike Mullarkey putts on No. 15. Mullarkey finished with 87, advancing to the sectional as an individual. The Crusaders finished third as a team. (Review photo)

Br. Rice senior Quinn Clifford follows his tee shot at No. 18. Clifford shot 79 at the regional meet, advancing to the sectional as an individual. (Review photo)

St. Rita senior Aidan Connolly tees off at No. 18. Connolly shot 84 at the regional and was one of four advancing individuals to the sectional.

Br. Rice senior Mike Mullarkey putts on No. 15. Mullarkey finished with 87, advancing to the sectional as an individual. The Crusaders finished third as a team. (Review photo)

Quinn Clifford had experienced this kind of round plenty this season.

The Br. Rice senior struggled on the early holes as he found his rhythm, typically recovering to deliver a solid round.

However, at a regional meet, the pressure was on.

With only two teams and four individuals advancing to the sectional, Clifford had little room for error.

A self-described “scrappy” par on No. 4 did the job.

Recovering quickly, Clifford shot 79 on Oct. 6 at the Class 2A Br. Rice regional at Balmoral Woods Country Club in Crete to advance as an individual to this week’s sectional.

St. Ignatius (317) took top honors as a team, followed by Fenwick (337) and Br. Rice (349). With their third-place finish, the Crusaders just missed advancing as a team to the Wheaton Academy sectional on Oct. 15 at St. Andrews Golf and Country Club in West Chicago.

With no state meet scheduled, the sectional will wrap up the fall golf season. In a non-COVID season, three teams and 10 individuals advance from the regional to the sectional. The Illinois High School Association tightened up the number of advancing competitors to keep attendance low at the state series due to the pandemic.

So, Clifford (Mt. Greenwood, Queen of Martyrs) knew he had to turn things around after a rocky start.

“I kept saying to myself, ‘Let’s make a story out of this,’” Clifford said. “I wanted to come back and post a good number, remember how I came back from that. I needed that level of confidence to calm me down and play like I practice, play like I can.”

Clifford said his drives were solid, but some tough greens at Balmoral made for a long day with his putter.

He credited strong shots on No. 15 as a key that helped him close out his round in consistent fashion.

Now, he’s hoping for that one big round where everything comes together.

“It seems like I’ve been waiting for a breakout,” Clifford said. “This season, I’ve been steady, right around 75. Every tournament, it’s those first three holes. If I can get through those, I’m at even par. I can post a really good number.”

Clifford wasn’t the only Crusader advancing from the regional as senior Mike Mullarkey shook off an up-and-down day to qualify for the sectional. Mullarkey shot 87.

“With the coronavirus and only two teams qualifying and less individuals, you’re worried a little,” Mullarkey said. “It’s in the back of your head the whole time. The ball was flying a lot further today. The wind and the greens were hard to hold, and above the hole is always bad.”

Mullarkey’s round was built around his drives, but he said he struggled on his approach shots and then around the greens. He’s hoping to turn things around at the sectional and put together a complete round.

“The season started off really well, but the last couple events, not so good,” Mullarkey said. “I’m definitely excited to advance. I just want to play well at sectional. That’s the goal. Quinn and I made it, so we hope we play well.”

Senior Aidan Connolly shot 84 for the Mustangs and advanced to the sectional as an individual. St. Rita (368) finished fourth in the team standings.

Senior Ethan Verner fired a solid round, finishing with an 87 to advance as an individual to the Wheaton Academy sectional. The Meteors (422) took seventh place as a team.