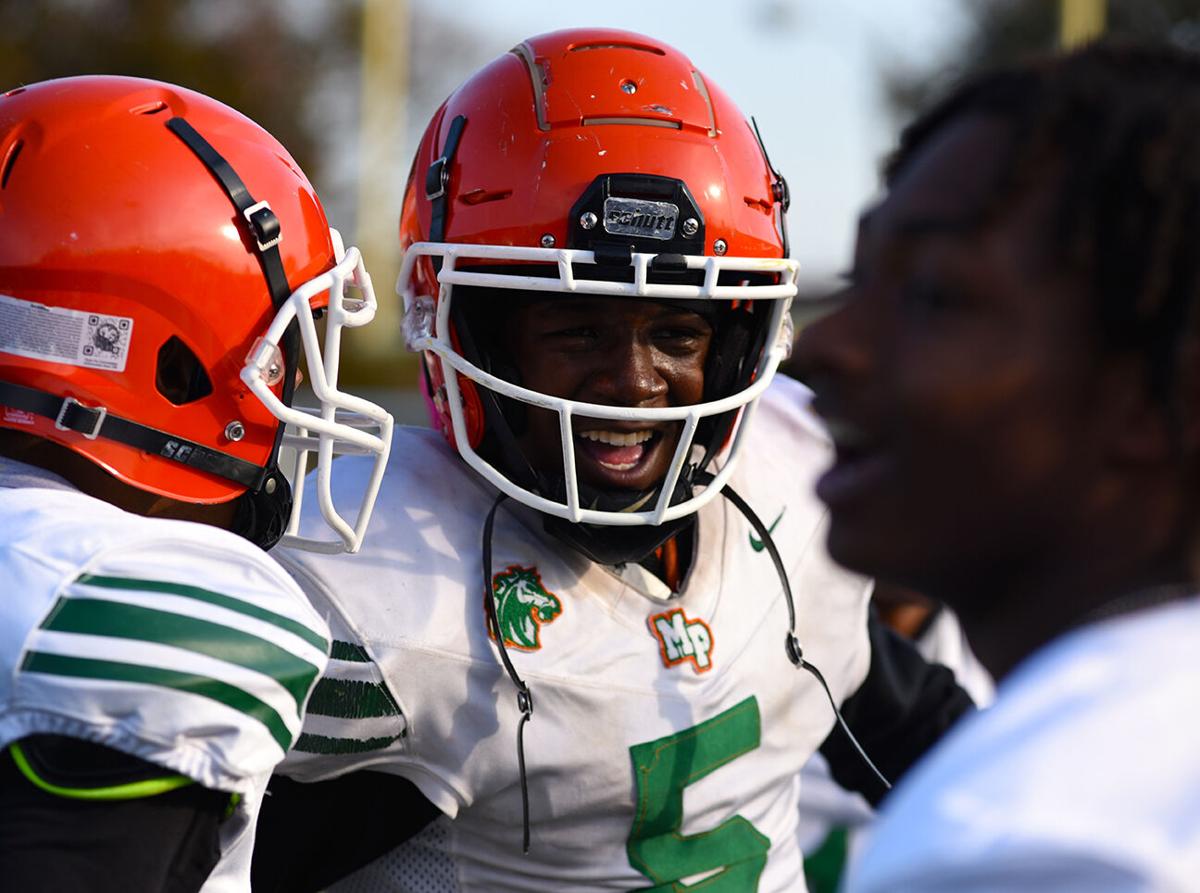 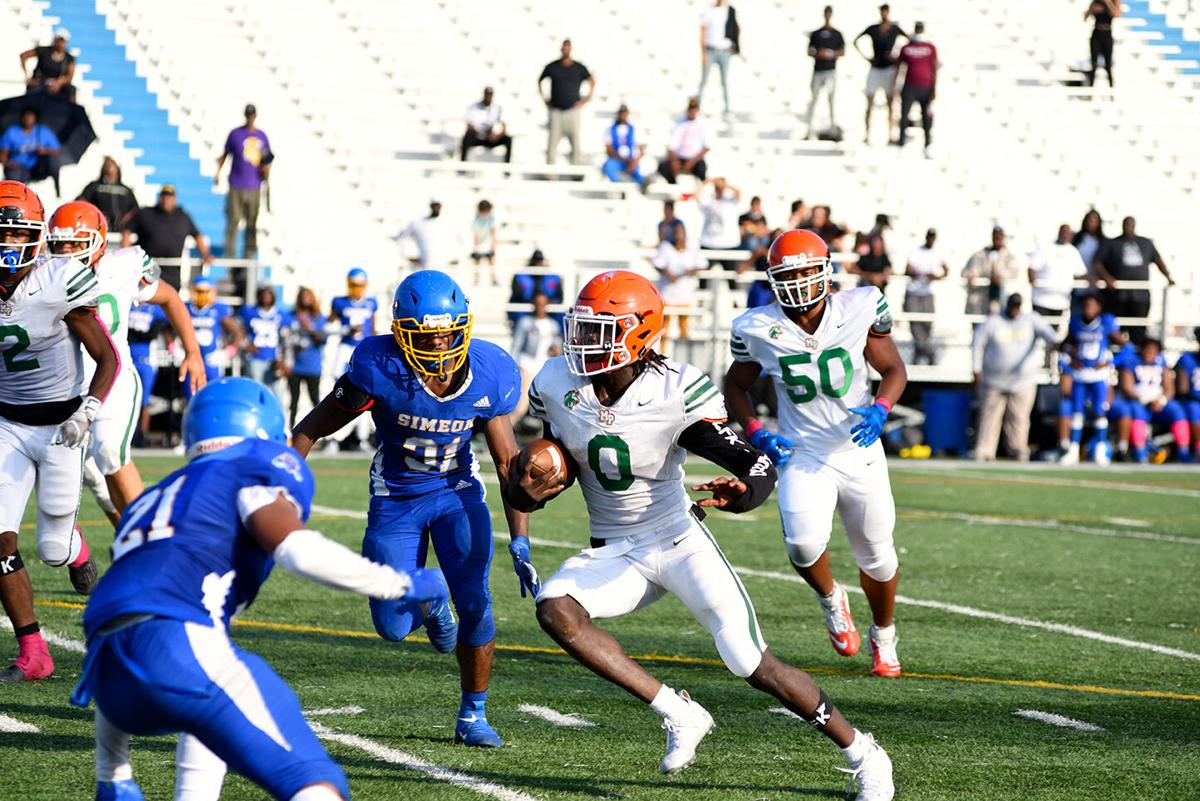 Morgan Park senior Aaron Warren splits the Simeon defense on a run in the second half. Warren rushed for 118 yards and 2 touchdowns and threw for another score for the Mustangs. (Review photo) 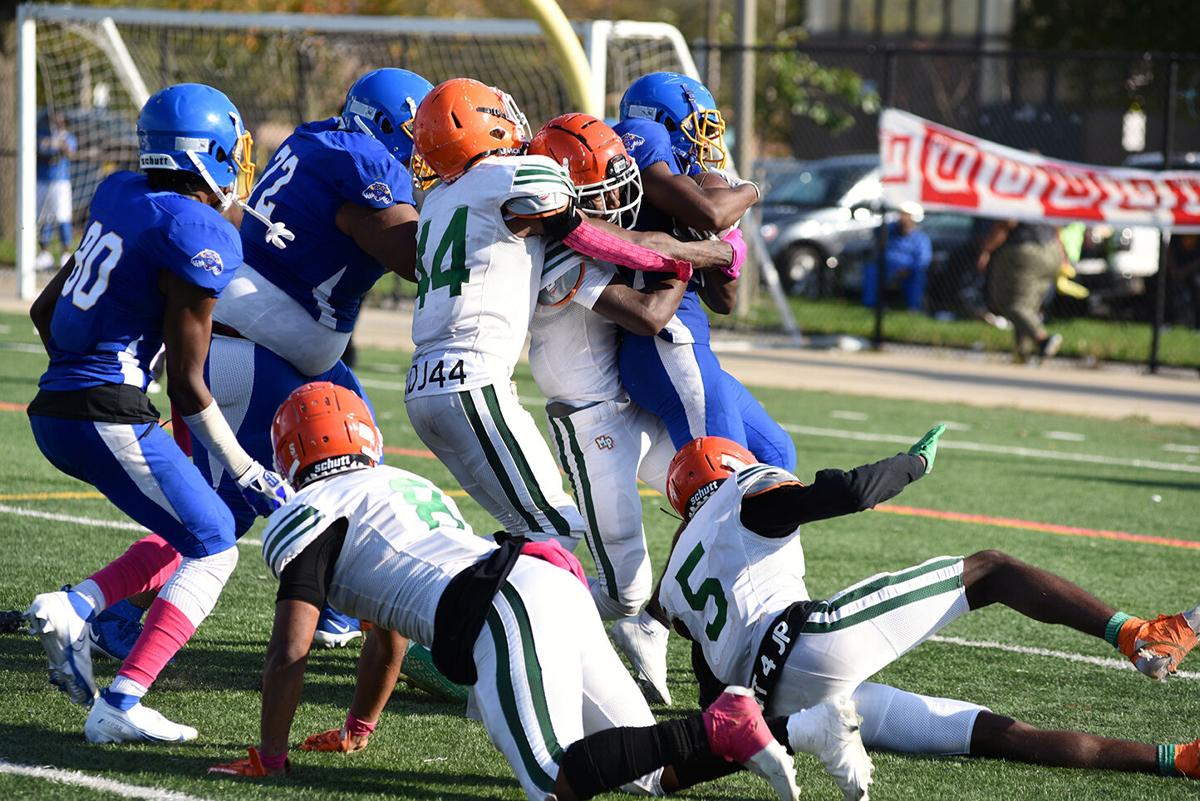 Morgan Park senior Aaron Warren splits the Simeon defense on a run in the second half. Warren rushed for 118 yards and 2 touchdowns and threw for another score for the Mustangs. (Review photo)

The Morgan Park High School (MPHS) football team was on the verge of a huge win, both for the season and for the program.

The Mustangs just needed one last play for a historic victory, and senior Jonas Lee was there to make it happen.

“That interception was an out-of-body experience, but I made the play,” Lee said with a smile. “I didn’t think about knocking the pass down, just grabbing the ball. The last couple weeks were rough, but to get this win, it feels good. It gives us a lot of hope.”

MPHS improved to 4-3, 3-1 with the win. A matchup with Hubbard awaits in Week 8 where the Mustangs can get their all-important fifth win to be eligible for the state playoffs.

The win over Simeon was the Mustangs’ first since 2009, according to the Illinois High School Association website.

“This win means a lot, to break that [streak],” Lee said. “We hadn’t beat them in 12 years. We did that in my senior year. That feels good; that feels really good.”

MPHS led 27-8 at halftime and held on in the second half for the win. Down a score with 1:27 to go, Simeon neared midfield on a fourth-down play with 40 seconds to go.

Lee swooped in for the interception, almost returning it for a touchdown before being pushed out of bounds deep in the red zone.

MPHS Coach Chris James said his team will have to clean things up, but the rivalry win was a huge statement for the program.

“That’s a stressful game. We toughed it out,” said James, a 2007 MPHS grad. “We didn’t play well in the second half, but no matter how you win, you win. I’m excited for the guys starting a tradition against a rival. We hadn’t beat them in 12 years. That’s a big win that, hopefully, gives us the momentum we need.”

Senior quarterback Aaron Warren had a huge day for the Mustangs, finishing with 118 rushing yards and 2 touchdowns. He also threw for an 8-yard touchdown early in the second quarter when he connected with senior Kendall Sprouts.

The highlight for Warren came later in the quarter on a third-and-11 play from the MPHS 36-yard line. Looking to pass, he was flushed out of the pocket and scrambled right toward the sideline.

“It was my time to make a play. You make a play or be stopped,” he said. “I almost got tripped up, but I caught myself, stayed up and ran strong.”

The Week-7 win came after back-to-back losses to Taft and Kenwood.

“Coach had said that he knows things are tough and it’s hard, but you’ve got to see things through,” Warren said. “We had to come out and play hard. Our big thing is no missed assignments and give maximum effort. We came out and did both.”

While Warren and talented sophomore Tysean Griffin (72 rushing yards) took care of things on offense, the MPHS defense stepped up in a big way with 5 interceptions.

Senior Kiwaun Davis set the tone immediately with a 45-yard interception return for a score on the first possession of the game.

Davis swooped in for the pass and took off untouched up the sideline.

“All week we were working on reading the quarterback’s three-step drop,” Davis said. “I saw him throw it and shot through to make a play on the ball. After that, it was green grass to the end zone.”

“Our coaches prepared us,” Davis said. “We wanted to run our stuff defensively, and when we do that, everything goes well. It’ll build our confidence, especially after two losses. We beat Simeon for the first time in forever and right before the playoffs.”