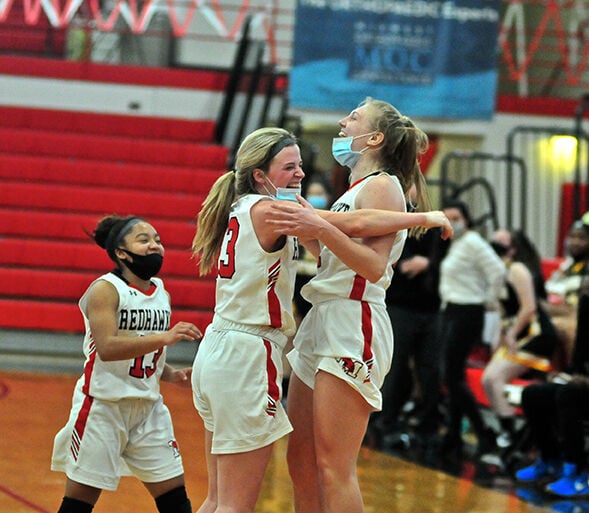 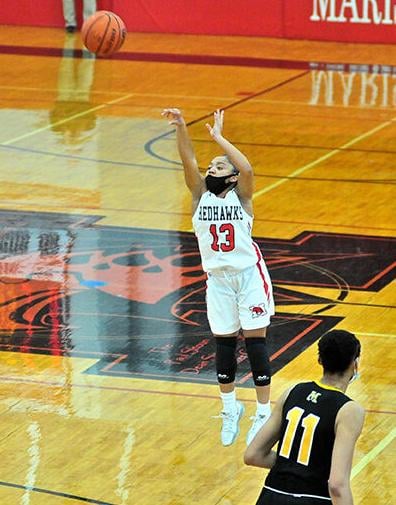 Kira Chivers drills a 3-pointer in the first half. The junior guard finished with 21 points to lead Marist in the championship game, including 10 in the first quarter. (Review photo) 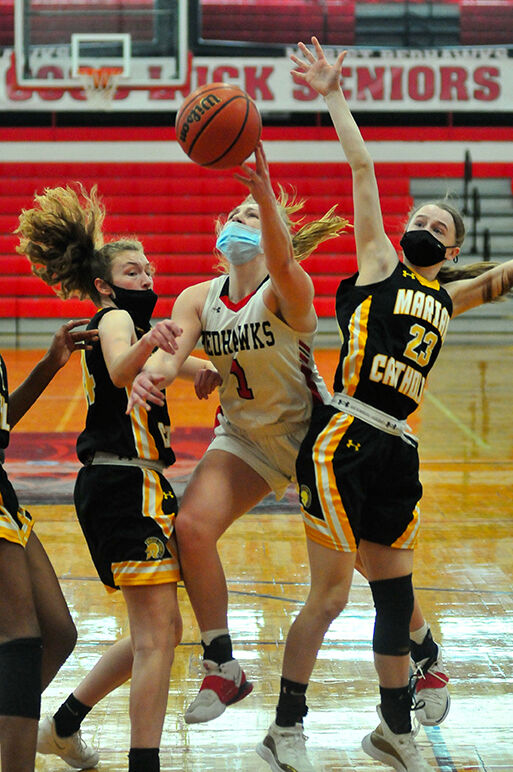 Sydney Affolter splits two Marian defenders on a drive to the basket in the second half. Affolter, a forward, finished with 16 points, 12 rebounds and 4 assists in the win for Marist. (Review photo) 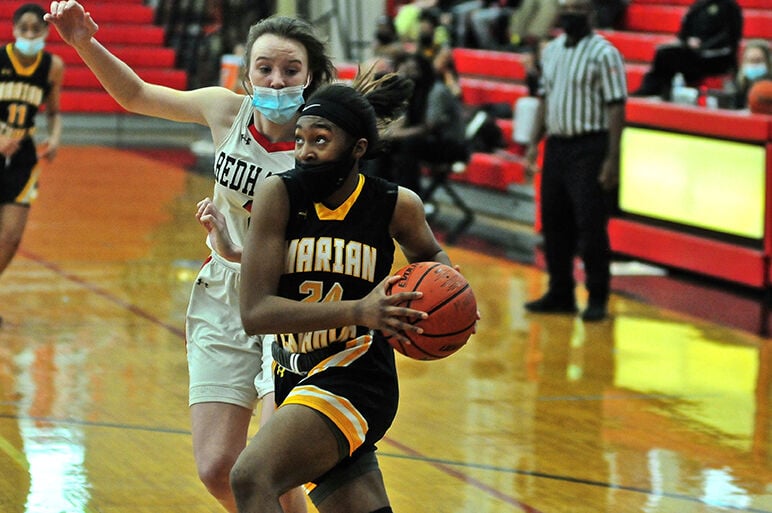 Kira Chivers drills a 3-pointer in the first half. The junior guard finished with 21 points to lead Marist in the championship game, including 10 in the first quarter. (Review photo)

Sydney Affolter splits two Marian defenders on a drive to the basket in the second half. Affolter, a forward, finished with 16 points, 12 rebounds and 4 assists in the win for Marist. (Review photo)

Running a fast-paced offense and dominating the boards, Marist was in control.

The East Suburban Catholic Conference (ESCC) championship was in sight. But then, in a flash, Marian Catholic put on a full-court press and started pushing back.

Marist junior Kira Chivers could see the lead—and the championship—slipping away. The RedHawks just needed to calm down.

“We were rushing. We had to slow it down,” Chivers said. “They sped us up a little bit. I had to take control and slow the game down. We know what we wanted to do. We had to knock some free throws down to win the game.”

Chivers calmly executed down the stretch, nailing 3 free throws over the last minute-plus as host Marist held off a furious rally on March 13 to defeat Marian Catholic 53-44.

The ESCC title was Marist’s first since 2017.

With no state playoffs due to the pandemic, the conference championship took on added meaning for Chivers and her teammates.

“This is our state title,” she said. “This really is big for us.”

Also providing a huge contribution for Marist was star senior Sydney Affolter, who finished with 16 points, 12 rebounds and 4 assists.

A Mt. Greenwood resident and St. Christina product, Affolter finished with a double-double in all 16 of Marist’s games this season.

In a normal season, the RedHawks would have been a contender for the Class 4A state championship.

Starting on varsity since her freshman year, Affolter, a 6’0” forward, is a University of Iowa recruit, and after the victory, she was filled with a mix of emotions.

“I’m definitely satisfied in the moment for winning as big as we could this year,” Affolter said. “It is really hard and disappointing because I think this team is one of the best to come out of Marist. We definitely could have made it downstate. I’m satisfied with how the season went. Our team did really well. It was a great time, even if it was short.”

Affolter and Chivers powered Marist as it raced to an early lead, going up by as many as 10 points in the first half.

The third quarter was much of the same, and the RedHawks extended the lead to 14 points.

But, in the fourth, Marian started wreaking havoc with a full-court press.

After junior Zikora Okonkwo drilled a wing 3-pointer for the Spartans with 1:45 to go, Marist’s lead shrunk to just 4 points at 48-44.

Chivers and Affolter had seen enough, and they stepped up to turn the momentum.

After Okonkwo went up for a layup and the ball rolled off the rim, Affolter fought through the ensuing scrum and pulled down the rebound.

At the other end shortly after that, Chivers calmly swished 2 free throws.

“It was more excitement than anything. I wanted to help finish out this game for our team,” Chivers said. “I worked on my free throws all summer and during quarantine, simplifying my routine. When you make free throws, you win games.”

Marist Coach Mary Pat Connolly has come to expect big things from her point guard, but Chivers continued to impress.

“What Kira has developed over these last three years is composure and confidence,” Connolly said. “She’s been a team captain the last two years. She knows she’s the leader out there. When you have an awesome point guard, she’s an extension of our coaching staff. That’s what we have.”

Chivers split 2 free throws the next time down. Affolter added 2 of her own to stem the tide for good.

Marist junior Emily Bojan also pulled down a key rebound off a Marian miss with 22 seconds left in the game.

For Affolter, the conference title was a fitting end to her record-setting career at Marist.

Affolter is the RedHawks’ all-time leading rebounder and is second on the all-time scoring list, but had it not been for COVID-19, Affolter likely would have caught JeTaun Rouse (Beverly, Sutherland) for the scoring mark of 2,036.

The usual regular season is 35 games. In addition, a normal girls basketball season would include the postseason playoffs, which could potentially add five games, giving a player additional scoring opportunities.

However, for Affolter, it’s never been about personal records; it’s always been about the team, and playing basketball for the RedHawks is an achievement she’ll never forget.

“Coming in as a freshman, there were high expectations,” she said. “I worked harder and harder, and I feel like I exceeded those expectations. I had so much fun. That’s what sticks with me.

“I love the program and the girls I played with.”

In the Spartans’ ESCC semifinal game on March 12, they went on the road and upset top-seeded and previously undefeated Benet Academy, 35-32.

With the basketball season now over, coaches in the conference are already looking forward to next year—one without COVID-19. But, for the RedHawks and Connolly, they will definitely miss Affolter.

“I can’t say enough of what she did this year,” Connolly said. “She broke so many records, but it wasn’t about records. She’s so focused from the beginning of the game until the final buzzer goes off. She’s a special player.”

Nonetheless, as usual for Marist, the cupboard is far from bare.

In addition to reinforcements from the lower levels next season, the team is looking forward to the return of Chivers, Harris, Bojan, Ward, juniors MC Brusek and Cencere McDaniel.

Chivers said the RedHawks are already soaring with anticipation.

“We’re ready,” she said. “We’re going to miss our seniors so much, but these past three years have built us up for this. We’ve gotten better. We have a better connection.

“Next year is going to be really exciting.”