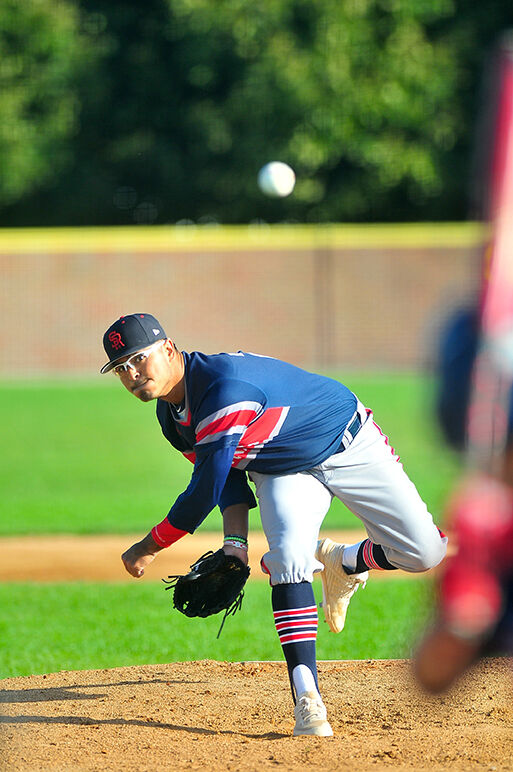 Senior southpaw Al Holguin fires a pitch in Game 1 of the St. Rita World Series. Holguin is a team captain, squaring off against a team led by fellow senior Bobby Atkinson. (Review photo) 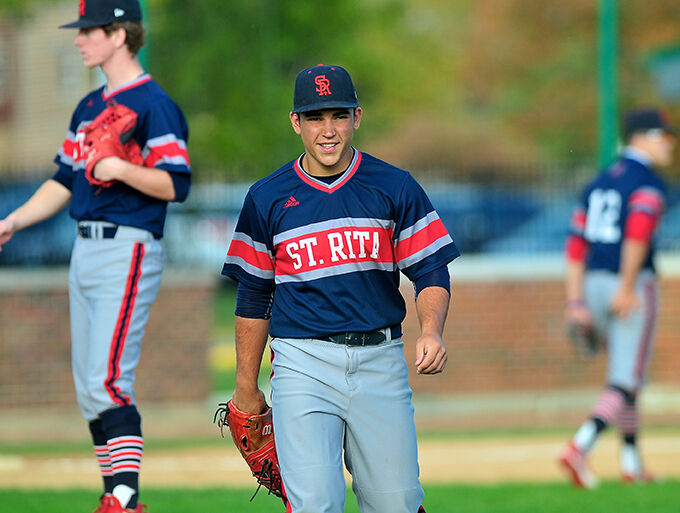 Senior first baseman Bobby Atkinson heads back to first base during Game 1 of the St. Rita World Series. Atkinson has been on the varsity since his freshman season. (Review photo)

Senior southpaw Al Holguin fires a pitch in Game 1 of the St. Rita World Series. Holguin is a team captain, squaring off against a team led by fellow senior Bobby Atkinson. (Review photo)

Senior first baseman Bobby Atkinson heads back to first base during Game 1 of the St. Rita World Series. Atkinson has been on the varsity since his freshman season. (Review photo)

Holding contact days for his baseball team through September and October, St. Rita Coach John Nee and his staff were just glad to be back together as a team, taking batting practice, doing some infield and working with the players after the current health crisis canceled the spring season and limited contact over the summer.

So, Nee wanted to wrap up the fall contact days with something different, something fun.

Splitting the varsity into two teams via a schoolyard draft, the Mustangs began their St. Rita Fall World Series on Oct. 14 with Game 1 of a five-game series.

“We knew we were blessed to have this evaluation period during the fall,” Nee said. “We get to evaluate our incoming juniors and even our seniors. We thought that, after we put the work in, let’s end it in a fun way. It’s a competitive way to end the fall. I’m excited because the kids have gotten into it.”

Wanting to involve the players as much as possible, Nee turned to two key seniors who have been on the varsity since their freshman season, pitcher/first baseman Al Holguin and first baseman/outfielder Bobby Atkinson.

The two were named team captains prior to an online draft via a Zoom call held the night before Game 1.

“We’ve got two guys in Bobby and Al who have been with us since they were freshmen,” Nee said. “They were clear-cut, easy picks for captains. We split up the team and had the online draft.”

When Holguin heard about the idea of an in-house World Series to wrap up the fall, he was ecstatic.

Holguin, 6’2, 210-pounds, is a University of South Carolina Upstate recruit.

“It’s a good thing. It’s something competitive,” Holguin said. “It’s pretty amazing for the team. We’re highly competitive as a group, so to go out here and play, show what we have, this is big for us.”

Atkinson agreed with Holguin’s assessment. He was thrilled to practice with his teammates, much less play a series with something on the line.

The winner will earn a pizza party and a T-shirt, and the losing team has to take care of the batting cage and set up the field in the spring/summer 2021 season.

“I thought it was a pretty cool idea,” Atkinson said. “I had no idea we were going to do something like this, so to play, I was really excited.”

As a sophomore, Atkinson was a key hitter for the Mustangs in 2019. However, he was limited to hitting as an impingement in his left shoulder prevented him from throwing.

“I’m feeling good. I’m excited to be out here finally,” Atkinson said. “I thought there was a tear, but it was still really painful to throw for about 6, 7 months. It’s all better now.”

As for draft strategy, the seniors are on the same page. Holguin and Atkinson turned to the mound.

“The key was drafting major pitching and, if we got lucky, go with some hitting,” Holguin said. “It was kind of hard. You put some friendships aside and just take care of things on pure baseball talent.”

Junior Jax Kalemba knocked in the winning runs with a walk-off 3-run double in the bottom of the seventh.