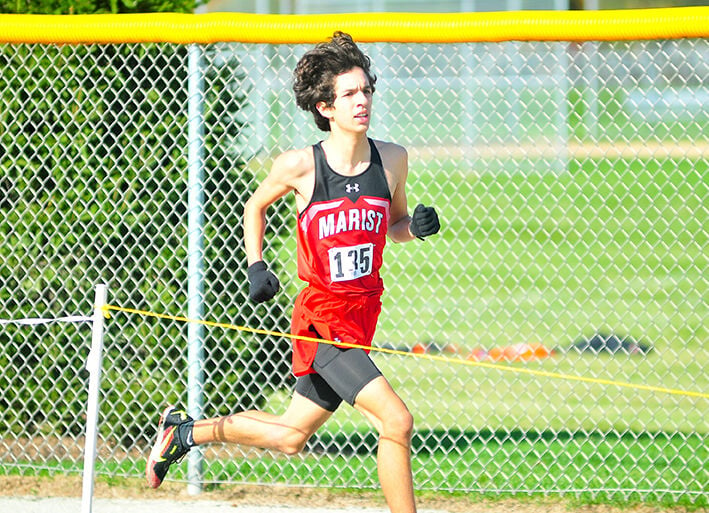 Marist junior Andrew Kerlin eyes the finish line. Kerlin finished in 18th place overall at the regional. The RedHawks finished fourth in the team standings, good enough to advance to the sectional as a team. (Review photo) 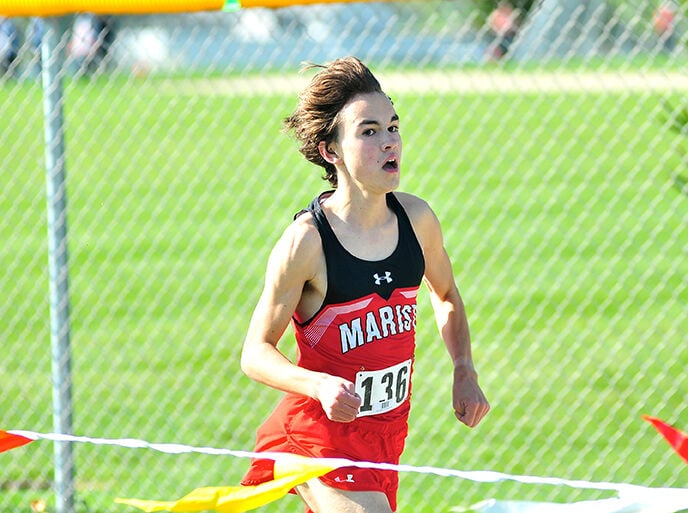 Marist junior Andrew Kerlin eyes the finish line. Kerlin finished in 18th place overall at the regional. The RedHawks finished fourth in the team standings, good enough to advance to the sectional as a team. (Review photo)

Racing against one of the stronger regional fields in the state, Marist junior Andrew Kerlin knew he didn’t want his season to end just yet.

Even more so, he didn’t want his senior teammates to see their season end.

The RedHawks wanted to run on and compete at the sectional.

Courtesy of a strong showing on Oct. 24 at a Class 3A regional, host Marist finished fourth as a team, advancing to the Whitney Young sectional to be held on Halloween.

“I wanted to make it for the team, especially our seniors who have been on the team since freshman year,” Kerlin said. “They’re some of my best friends. It would have sucked if their season ended today.”

Marist and Sandburg both totaled 124 points, claiming the last two team spots for the sectional. The top five teams and top five individuals from non-advancing teams advanced to the sectional.

“This means the world because this year we were put in a more difficult regional than other years,” Kerlin said. “It was nice to come out as a team and show we’ve got that overall skill and talent, even in a harder regional.”

Looking to limit the number of runners competing at one time, the regional featured three boys and three girls races with the overall times compiled. The top two runners for each team competed in one race, then third and fourth runners and finally the fifth, sixth and seventh in the third race.

For Phillips, the schedule didn’t impact his strategy as the junior continued his assault on stopwatches with a new personal best.

“I was trying to run my race,” Phillips said. “I wanted to go really fast and finish ahead of anybody in the other heats that might run a fast time. It was a personal record for me, so I’m happy with that.”

The course started on the Marist campus and then continued into St. Casimir Cemetery before winding back onto the campus, with runners finishing the race on the warning track of the baseball stadium.

During the regular season, Marist ran a different course that featured the campus more, but Kerlin and his teammates still appreciated running at home.

“We ran the course on our recovery days,” Kerlin said. “That gave us a chance to get used to it and have a home-course advantage. Running the new course was nice. I liked it better with more grass, not as many sharp turns. It was all pretty smooth and solid.”

The sectional meet this week will wrap up the fall season for cross-country with the Illinois High School Association not hosting a state meet due to the pandemic.

Phillips said he hasn’t gotten too wrapped up in the schedule changes.

The junior just wants to keep cutting time with each race and picking off the runners in front of him.

He declined to name any potential targets.

“I’m not going to name drop guys, no one specific in mind,” Phillips said with a laugh. “I want to keep seeing the time drop, run fast and run well. I know there’s no state, but I’m perfectly content with the season. I just run the race.”