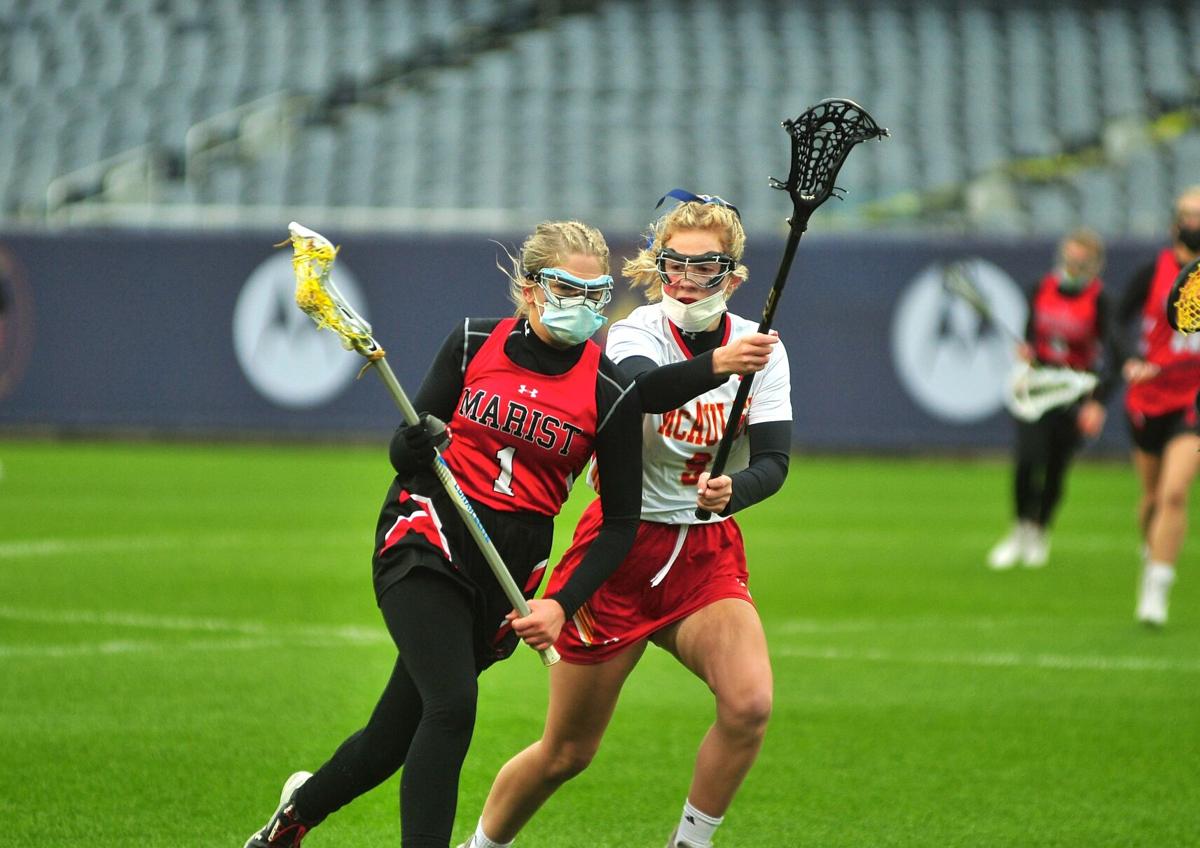 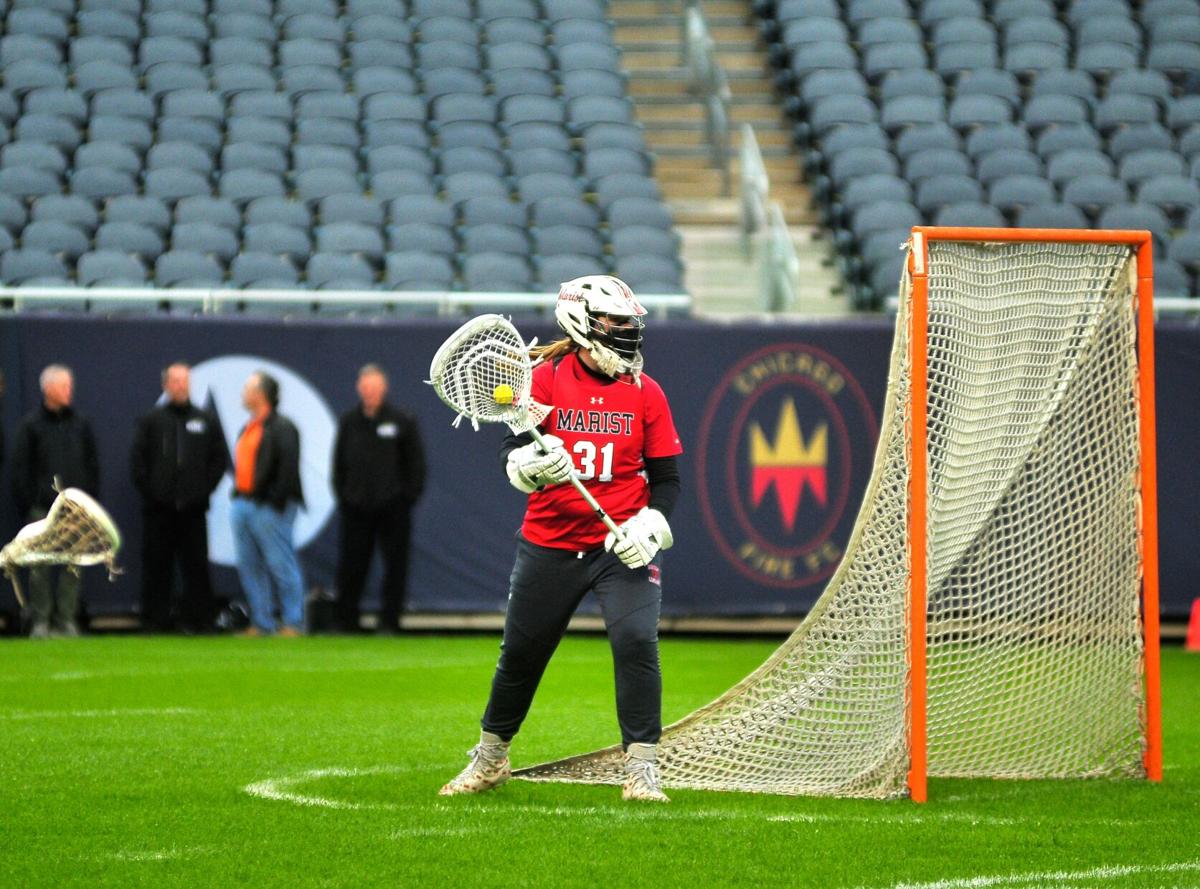 Marist junior goalkeeper Maddie Drebing looks for an open teammate to pass to after making a save. Drebing finished with 11 saves in the win over Mother McAuley at Soldier Field. (Review photo) 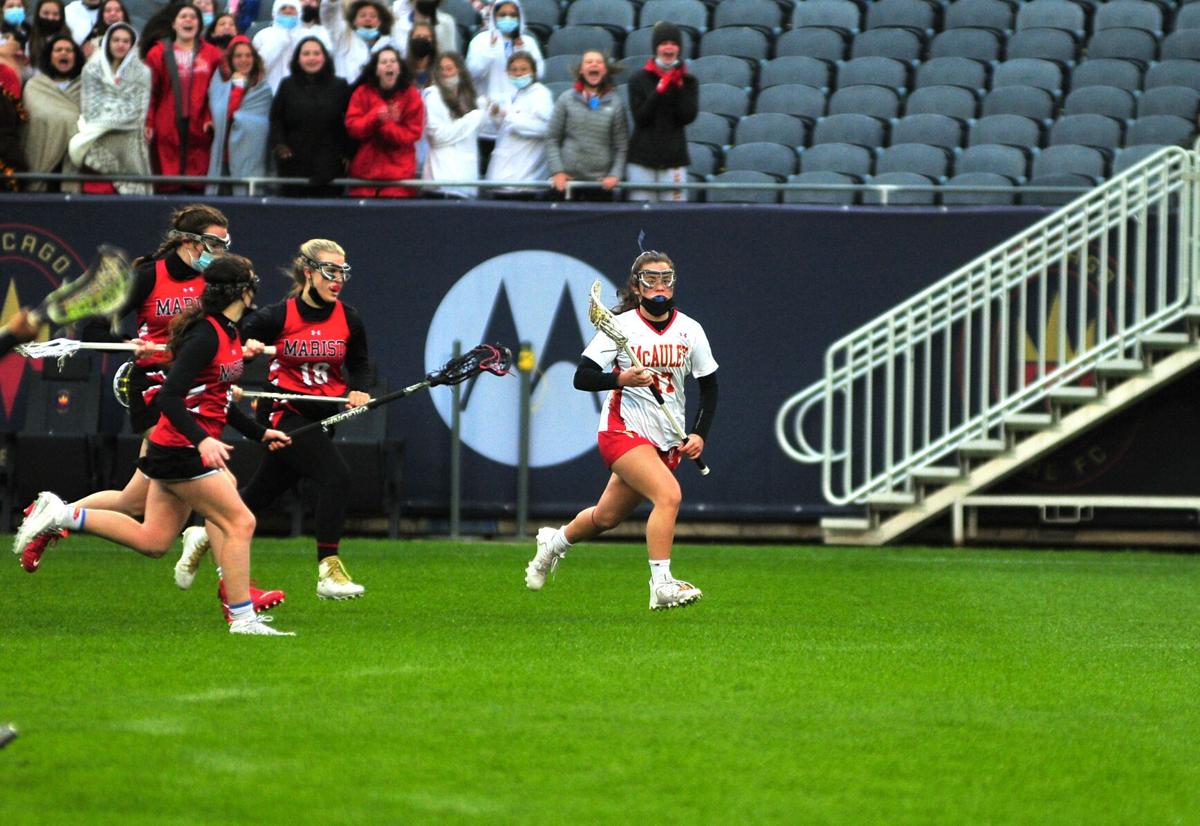 Mother McAuley freshman Kayli Grant races ahead of the defense for a shot. Grant led the Mighty Macs with 5 goals in the nonconference rivalry game played at Soldier Field. (Review photo)

Marist junior goalkeeper Maddie Drebing looks for an open teammate to pass to after making a save. Drebing finished with 11 saves in the win over Mother McAuley at Soldier Field. (Review photo)

Mother McAuley freshman Kayli Grant races ahead of the defense for a shot. Grant led the Mighty Macs with 5 goals in the nonconference rivalry game played at Soldier Field. (Review photo)

Prepping for a rivalry showdown with Mother McAuley, Marist junior goalkeeper Maddie Drebing warmed up with her teammates like she would a normal game.

Then with game time fast approaching, she took the field with her teammates.

Walking onto the field, this was bigger. This was different.

For the RedHawks, Mighty Macs and girls high school sports, this was history.

Playing the first girls high school athletic event ever played at Soldier Field, Marist prevailed with a rain-soaked 13-7 victory on May 28 over Mother McAuley.

The girls game was the first of a tripleheader with two boys games following, Mount Carmel and Marist and then Lane Tech and Whitney Young.

“It’s so amazing we get to play on a field the pros play on,” Drebing said. “We’re the first high school team, let alone the first girls team, to play here. It’s unbelievable. It doesn’t even feel real playing here. It was crazy.”

Drebing, a Duke University recruit, finished with 11 saves in the historic win.

A three-year varsity player, Dennehy tried to take in the atmosphere.

“It’s nuts we got to play here. I feel so honored to be here,” Dennehy said. “It’s such a great opportunity. This is a huge moment, especially since we got to play before the boys. We were the first [girls team] and the first lacrosse game on this field. It was awesome.”

Through most of the first half, neither team was able to pull away from the other.

Marist led 5-2 but McAuley answered with a goal each from freshman Kayli Grant and junior Shannon Maloney.

But over the final 5 minutes of the first half, it was all Marist.

Dennehy scored back-to-back goals a little over a minute apart, and then Lyons and Ohle added a goal each as the RedHawks took a 9-4 advantage into halftime.

The balanced attack has been a strength for Marist (6-8) this spring.

“I kept my head clear and knew I wanted to win,” Dennehy said. “I gave it all I had. No one girls should be scoring all our goals. We should all be scoring goals like we did today. This is such a good rivalry for us.”

Drebing delivered a stingy performance in goal, limiting McAuley’s chances while her teammates stayed on the offensive through a rainy second half.

“This was the first time we’d played McAuley in 4 years,” Drebing said. “We played as a team and played as Marist. We were all working together, not just individual players. It really was a team effort.”

Lyons led Marist with 6 ground balls. Dennehy and Colon had 4 each.

“We have a very young team with most of the girls not having played a varsity game before this year,” Hopkins said. “Most of our juniors came from the freshman team straight to varsity. We have a lot of talent. We just need to gain some confidence to step into that leadership role.”

Marist and Mother McAuley will square off again on June 8 in a sectional quarterfinal matchup.

Sullivan and Gawel are both Christ the King Elementary School graduates.

Mt. Carmel will face Kenwood or Brother Rice on June 7 in a sectional quarterfinal showdown.

Sam Colon (6 goals), Seamus Kelly (goal, assist) and Misha Auskalnis (15 saves) all contributed for Marist. The RedHawks will host St. Laurence or Andrew on June 7 in a quarterfinal game.