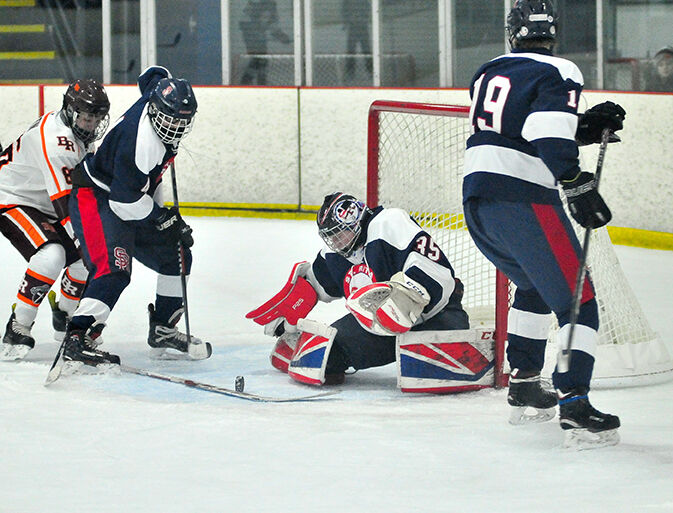 St. Rita junior goalkeeper Mike Menard dives for the puck to make a save against Br. Rice. Menard earned a hard-fought win, piling up 49 saves against the Crusaders. (Review photo) 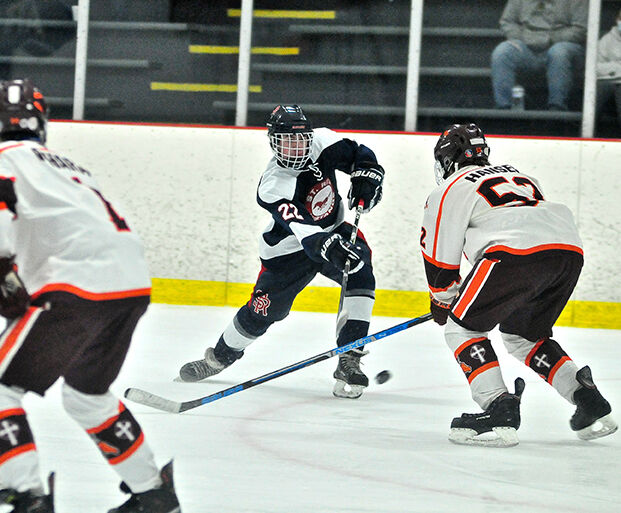 St. Rita sophomore forward Luke Maher blasts a shot that opened the scoring in the Mustangs’ win over Br. Rice. As a freshman, Maher split time between the varsity and junior-varsity teams. (Review photo) 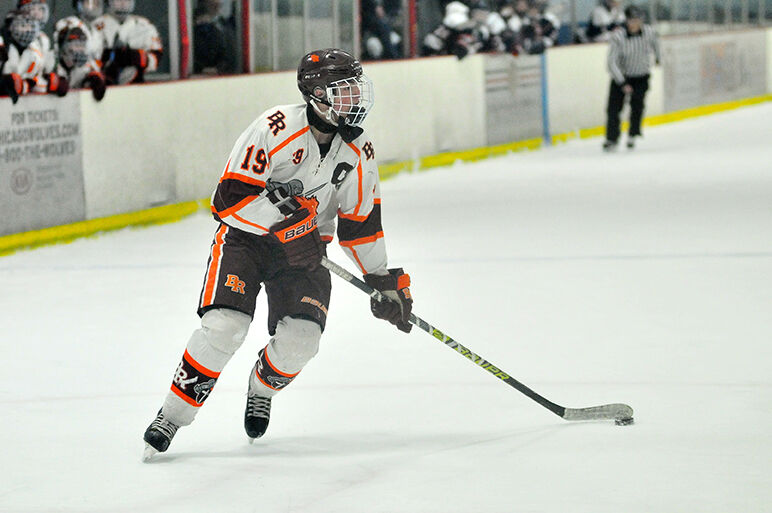 St. Rita junior goalkeeper Mike Menard dives for the puck to make a save against Br. Rice. Menard earned a hard-fought win, piling up 49 saves against the Crusaders. (Review photo)

St. Rita sophomore forward Luke Maher blasts a shot that opened the scoring in the Mustangs’ win over Br. Rice. As a freshman, Maher split time between the varsity and junior-varsity teams. (Review photo)

He likes to be under pressure while delivering save after save.

“It helps when there’s a fast pace in front of you, and you’ve got to keep up,” Menard said. “That sets the tone, and you can take it from there. Once the saves get going, you feel good. It can take a bad bounce, though. That can change everything, so you’ve got to keep working.”

Menard, a Beverly resident and St. John Fisher grad, split time last season in goal, but he came on strong late in the year in the state playoffs and Kennedy Cup series.

With a young roster around him, Menard will be counted on for big things in this year’s campaign.

“Mike really turned it on late last year and played great in the playoffs,” said St. Rita Coach Brian Coleman. “We knew he was going to be good this year. You could tell he felt confident. No surprise he had that game.”

Working with an early lead courtesy of goals from forwards Luke Maher and Aidan Devlin, Maher went to work against the Crusaders.

On a Br. Rice power play in the closing minutes of the first half, Menard came through with one save after another, including denying a flurry of shots during a scrap in front of the net.

The Mustangs killed the power play, emerging unscathed and still up 2-0.

“I definitely felt good coming off the first period,” Menard said. “It’s always good to shut them down early and keep going from there. It helped getting that first goal. That and the first couple saves, it helps set the tone.”

Menard is a veteran leader for a St. Rita squad that lost 16 seniors from last season’s team that advanced to the Kennedy Cup semifinals.

Maher, a sophomore forward, split time as a freshman with the varsity and junior varsity last year, playing varsity in the playoffs.

With this year’s season in doubt for months, Maher and his teammates are savoring the opportunity to take the ice. The high school hockey season normally starts in September, and the state and league playoffs continue into February and March.

“We’re stoked to play,” Maher said. “The freshmen are loving it, and the seniors are glad they get a chance to finish out what they started. We have a chance to go for that Kennedy Cup. We’re all stoked. We’re missing the fans, but it’s fun to be back and playing with the boys.”

Maher opened the scoring against Br. Rice less than three minutes into the first period. Racing up the ice on a breakaway, Maher fired a shot from the left side just outside the circle.

The puck whizzed through traffic, finding the net on a high shot.

“I used the defense as a screen, and happily, it got through,” Maher said. “It’s always a big one against Br. Rice. It felt good [off the stick], but there is always luck when you’re shooting through legs. Luckily, it found its way through.”

Devlin scored later in the first period on an assist from Jake Jana.

For Br. Rice, forward Sean Curtin scored with 47 seconds left in the third period to break up Menard’s shutout.

CCHL teams started league play late in the week of Feb. 8, starting an 18-game schedule that will continue through April.

The Kennedy Cup playoff series is still to be determined.

Enjoying the chance for the team to take the ice, Coleman said he was just glad for the opportunity.

“It’s a very young group with a lot of sophomores and juniors and a couple freshmen, too,” Coleman said. “They’re hockey players. They just want to play games. They didn’t get a chance for months. That’s the biggest thing. From a development standpoint, it’s huge to get these games in.”