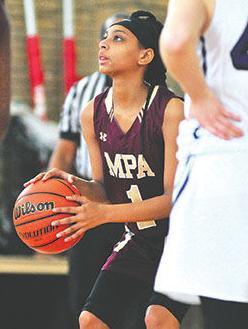 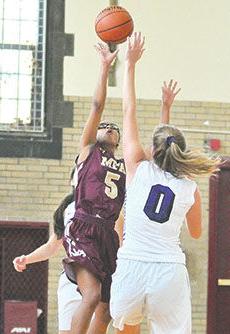 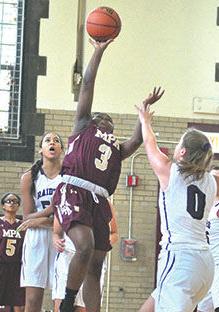 When Sheridan Harris made her varsity debut for Morgan Park Academy in November, the 5’7” guard was far from a typical freshman.

As a student-athlete on MPA’s lower-school team, she had watched the MPA varsity team for years, including her sister, Samaria, a four-year varsity player.

So, Sheridan felt some nerves before her varsity debut, but those also included excitement.

“I’d been watching the varsity play a long time because of my sister,” Sheridan said. “I knew everyone on the team, so it was the nerves of playing my first high school game, but the excitement of playing with these girls I’d been watching in the lower school.”

Also up on the varsity since her freshman season, Samaria Harris tried to help guide her sister early this season. The skill level was there, but she had to adjust to the speed.

“Sheridan is obviously going to be someone other teams watch for,” Samaria said. “She has to be able to recognize that and keep her head in the game and not let it affect her.”

That sisterly connection has certainly helped as Sheridan makes the transition straight from elementary school to varsity basketball.

“We’re close. We’re sisters, so we fight all the time; but it happens,” Sheridan said with a laugh. “We’re siblings. We’ll stick together, and with her [being a senior], it’s a good year for us to be together.”

Longtime MPA Coach Tom Drahozal knew what a talent he had in the up-and-coming freshman guard.

“I coach our summer camp, so I’ve seen Sheridan for several years. I knew she was something special,” Drahozal said. “Her potential, she could be one of the best players we’ve had here. She’s the complete package as a player.”

Down 27-14 midway through the third, the Warriors had a big comeback left in the tank that featured contributions from all over the floor.

Samaria Harris drilled a wing 3-pointer at the buzzer to end the third and scored 7 of her 9 over an extended run in the third and fourth.

“It’s definitely just keeping our momentum up. We can’t let a deficit affect us,” Samaria said. “Our coaches help us a lot. We’re not down a tremendous amount of points, so we keep fighting and take our time. That’s really key.”

However, over the game’s final 4 minutes, North Shore had one last push, pulling away with a 9-0 run.

“We have to stick with it together as a team,” Sheridan said. “We can’t have it where we’re down too much. We need to keep pushing, get our shots up and stick together. If we get too down, that’s not going to happen.”

Drahozal said he continues to see a balanced attack pay off for MPA.

“The scoring has been spread around. We’ve had games with four players in double figures,” Drahozal said. “It’s tougher to lock in on one person. That’s been the difference for us.”