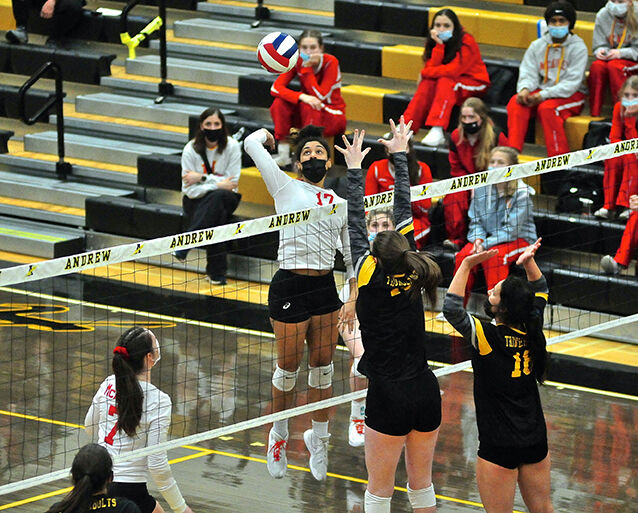 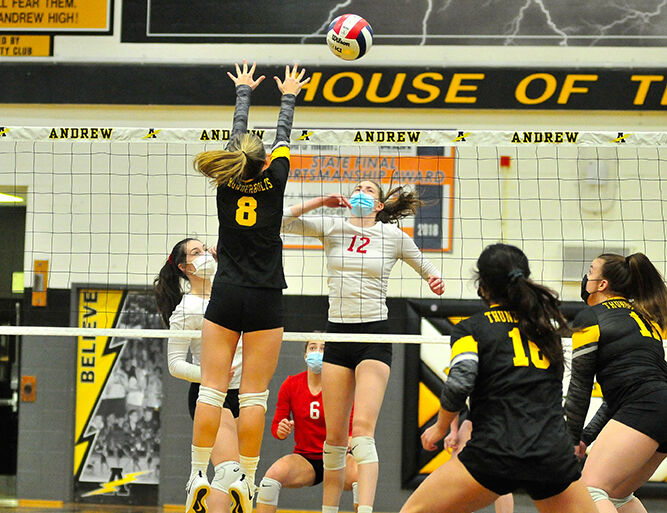 Molly Boyd hits a kill past the Andrew block. A senior middle, Boyd (Cassell) had 4 kills and 2 blocks for the Mighty Macs. (Review photo) 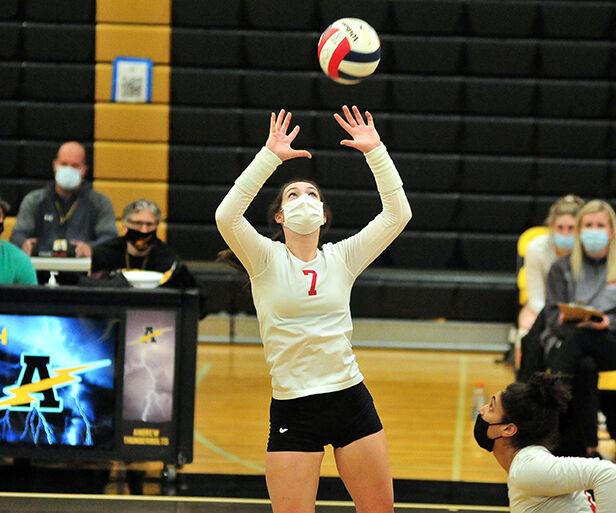 Junior setter Caroline Macander sets up a teammate in the second set. Macander (St. Barnabas) racked up 22 assists for McAuley in a 2-set win against Andrew. (Review photo)

Molly Boyd hits a kill past the Andrew block. A senior middle, Boyd (Cassell) had 4 kills and 2 blocks for the Mighty Macs. (Review photo)

Junior setter Caroline Macander sets up a teammate in the second set. Macander (St. Barnabas) racked up 22 assists for McAuley in a 2-set win against Andrew. (Review photo)

She’s been a steady blocking presence in the middle and a solid hitter for the Mighty Macs.

But, as she kicks off a unique senior season this year, Sarich has improved on another facet of her game. In addition to her physical skills, she’s gained a mental edge that has her confident, comfortable and ready to lead.

That was apparent in a nonconference match on March 17 in Tinley Park as Mother McAuley defeated host Andrew 25-16, 25-19 and Sarich finished with 8 kills and 4 blocks.

Sarich said the mental aspect of the game has helped her.

“It’s just not being in my head,” Sarich said. “I feel pretty comfortable. I’ve been on the team three years; so, I’m used to it, and I’m comfortable being on the court and trusting everyone. We’re all really excited this year.”

McAuley Coach Jen DeJarld has seen big improvements from Sarich and Molly Boyd, senior middles who have been on varsity since their sophomore seasons.

Boyd (Mt. Greenwood, Cassell) had 4 kills and 2 blocks against Andrew.

“Abby has great hand-eye coordination on the block. She’s instinctual,” Sarich said. “This year, she’s not holding back. She and Molly have always been a little cautious, a little careful. As seniors, you see such a big jump. That confidence just clicks at different times for kids.”

Sarich delivered numerous timely kills and blocks against a stubborn Andrew squad that did not go quietly in the loss.

Holding off a rally in the first set, Sarich slammed a quick kill off a pass from junior Caroline Macander (St. Barnabas) to go up 18-15.

Her kill sparked an 8-1 run that closed the set.

In the second set, Macander combined with freshman Ellie White on 2 late blocks, and then Macander closed out the match with a pretty kill on a slide shot to the right.

Girls volleyball is normally played in the fall but was moved to the spring with football and boys soccer due to the pandemic. Teams were allowed to host workouts and open gyms through the fall and into the winter months.

Still, the potential of no season at all seemed likely in the days before Illinois High School Association officials reversed course in late January.

Always hopeful, Sarich and her teammates vowed to be ready.

With depth at every position, the Macs will be hard to defend with their well-balanced attack.

“We have great setters. Anytime you have a chance to go in, it’s all or nothing,” Boyd said. “Play your hardest when you get in. We have a deep, talented team. Anyone can come in off the bench and play. Practicing like this, we’re competing across the net in practice.”

With volleyball now being conducted in spring, some unique scheduling conflicts have arisen as athletes play with both their high school teams and their club teams.

The two schedules make for some long days at times, but Boyd is happy to stay busy.

“I’m so glad we have to deal with it,” she said with a laugh. “We didn’t get to do anything for five whole months. It’s awesome to be able to get going. We try and go hard at McAuley and go to club on the weekend. You want to play as hard as you can before college.”

After months of wondering if there would be a season, DeJarld said she’s glad to be back on the court, especially with her talented senior class, even though there will no postseason.

Boyd, Anna Jaworowski, LeBel, McDermott and Sarich have been on the varsity since their sophomore seasons, and DeJarld said their time has come.

“We’re so excited. This is the team I’ve been waiting for the last three years,” she said. “You watch them mature and develop as players. They have. We have great senior leadership. We worked hard all fall and in our open gyms. It’s easy to set the lineup with the returners we have.”