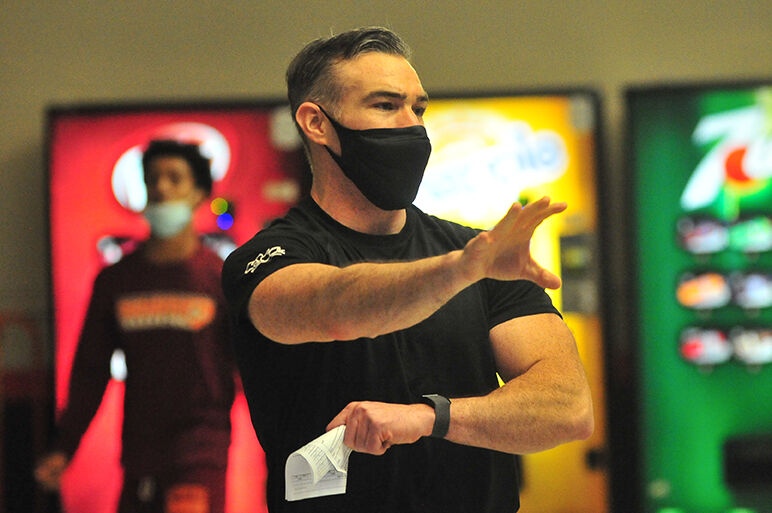 Mike Cano leads a workout at Br. Rice in mid-December. A 2003 Br. Rice grad, Cano has worked with the football and baseball programs at his alma mater for the last three-plus years. (Review photo) 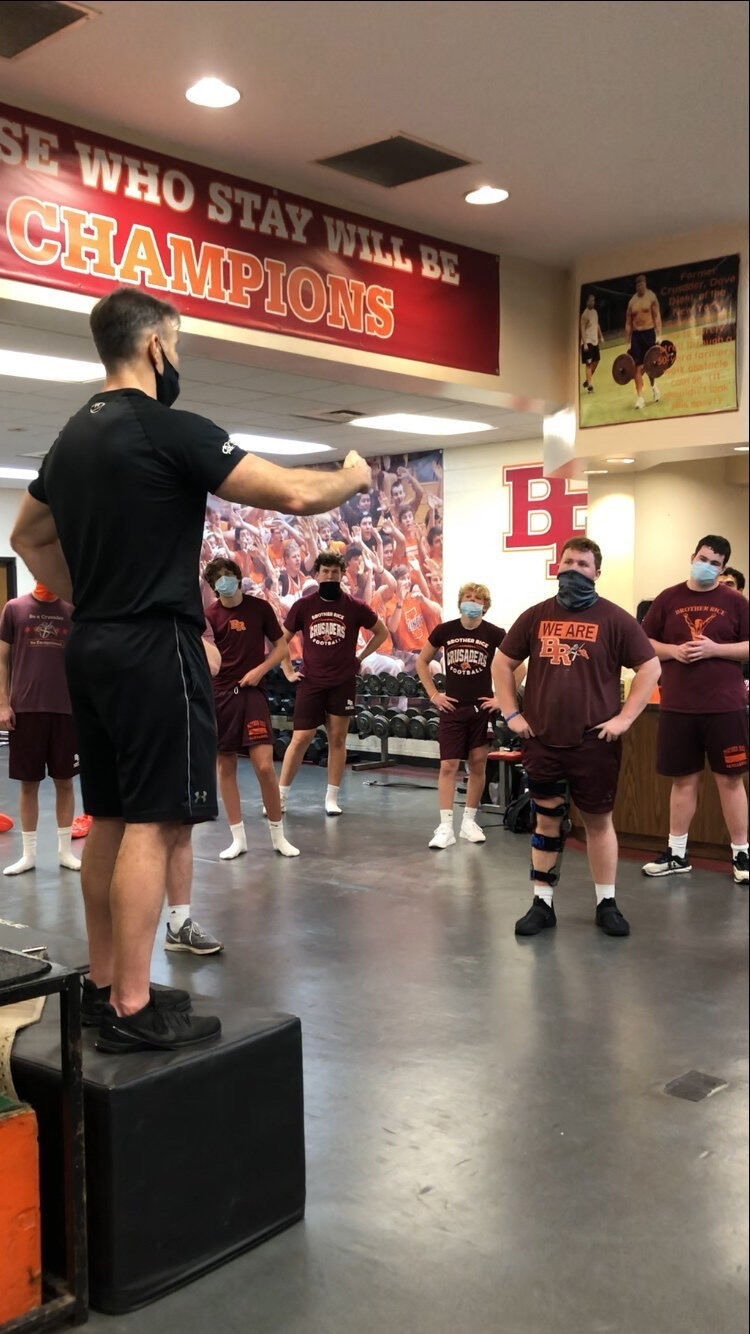 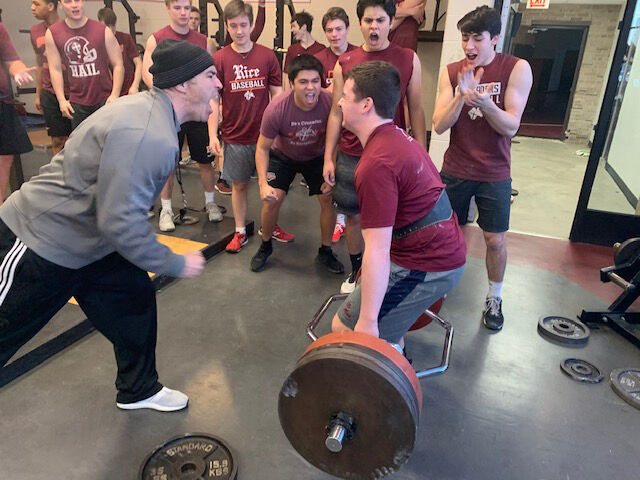 Cano conducts a workout at Br. Rice before the pandemic. Cano, an Oak Lawn resident, has run ONEighty, a sports performance program since 2014. (photo courtesy of Mike Cano)

Mike Cano leads a workout at Br. Rice in mid-December. A 2003 Br. Rice grad, Cano has worked with the football and baseball programs at his alma mater for the last three-plus years. (Review photo)

Cano conducts a workout at Br. Rice before the pandemic. Cano, an Oak Lawn resident, has run ONEighty, a sports performance program since 2014. (photo courtesy of Mike Cano)

Now in his fourth year working with student-athletes at Br. Rice High School, Mike Cano has tried to make the best of the last 10-plus months.

Cano trains athletes in the school’s football and baseball programs in a role similar to a strength and conditioning coach, teaching the correct ways to stretch, strengthen and improve.

But, with the pandemic limiting how he would normally do things, from contact days to the number of people working out, Cano improvised at every step, but the goal remained the same: train athletes to give it their all.

“I don’t care how gifted you are. If you’re here every day and give your best, you’re present in the moment, and that’s what it’s all about,” Cano said at a December workout. “Keep chipping away, and next thing you know, that will get you any job you want. Are you present? Give your best every day.”

Cano, 36, is a 2003 Br. Rice graduate who grew up in Oak Lawn and attended St. Catherine of Alexandria Elementary School.

A team captain on the football team during his time at Br. Rice, Cano then enrolled at Illinois State University (ISU) but did not play football with the Redbirds.

Cano shifted his focus from competing as an athlete to the coaching side of sports.

“As an athlete, people are blessed with physical talents,” Cano said. “For me, it was earning the respect through the work, showing up and being a little bit early.”

Cano said he put in the effort and positive results followed.

“I started as an intern at A&M, worked at a bar, delivered pizzas, and rode a bike to get to work,” Cano said. “I was an average dude, an average Joe, but I asked different questions and tried to learn. I went from not playing sports and was able to flip that into a power. Look at everything as an opportunity to become the best version of yourself.”

During his career, Cano said, he learned new things on a daily basis from coaches, players and staff.

Cano said he always had a vision of where he wanted to be, and six years ago, he achieved that goal by founding with Brian Neal a company called ONEighty Athletics.

The sports-performance program is purchased by coaches and athletic trainers and shows the proper ways to gain strength, stretch and condition.

“Our ability to break down and provide in detail and with in-depth videos and programs is at a high level,” Cano said. “We’ve sold the program to a majority of high school coaches and then sports parents, too.”

Cano said the program is suitable for all levels of athletes.

“It’s a gift to be talented as an athlete,” Cano said. “We have kids at Br. Rice like Willie Shaw [a Toledo recruit] who runs a 4.4 40-yard dash and has a 38-inch vertical. That’s a gift. It’s my job to make an environment where we’re going to maximize everyone’s potential. I don’t [care] if you have a 48-inch or 15-inch vertical.”

In the weight room or on the football field, Cano is a bundle of energy as he conducts stretching and workouts. On the sidelines of Br. Rice football games, he’s like the Energizer Bunny.

Strength and conditioning coaches in college football have become viral sensations in recent years with their energetic personalities and antics on the sidelines, but for Cano, none of his enthusiasm is forced.

He’s just being himself and striving to motivate aspiring athletes.

“You have to be yourself. I’ve developed my identity,” Cano said. “I’m not looking for attention. That’s on the players. What’s crucial is they have to know that the energy on a Tuesday morning in the offseason is exactly the same as game day. It’s critical. Be yourself and provide value in ways you know how to.”

At a mid-December workout, athletes were divided into small groups, and they rotated around the school from station to station, including the weight room, the gyms, the wrestling room and the cafeteria.

“We’ve been very fortunate [using the facilities],” Cano said. “I’m always trying to give [athletes] more than what you have. A lot of coaches and people gave me the best in everything they did. Now, I’m very clear on the vision I have for my team every day.”