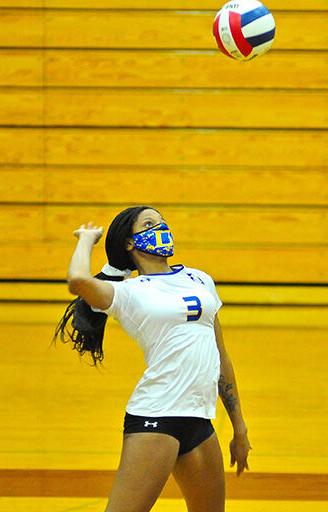 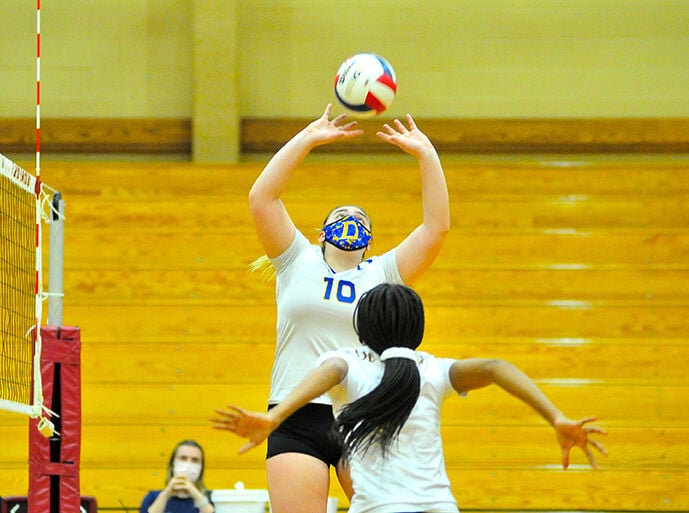 Senior setter Bella LaCoco looks to connect with a teammate in the second set. LaCoco finished with 11 assists and 7 kills for De La Salle. (Review photo) 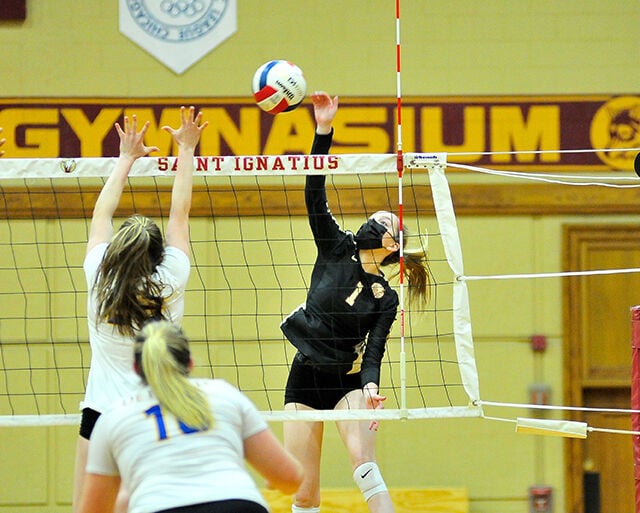 Senior setter Bella LaCoco looks to connect with a teammate in the second set. LaCoco finished with 11 assists and 7 kills for De La Salle. (Review photo)

Through the usual ups and downs of a back-and-forth match, De La Salle setters Bella LaCoco and Daniela Scalise always try to maintain a balanced attack.

They look for a favorable matchup here, a teammate who needs a swing there. Sometimes, they just feed the hot hitter.

LaCoco likes to call it, “Feed the beast.”

With the Meteors facing host St. Ignatius on March 30, the beast was junior middle/outside Amayah Jones.

She slammed one key kill after another down the stretch in an exciting 25-17, 21-25, 25-18 win in Girls Catholic Athletic Conference (GCAC)-Red action.

“When Amayah is hitting and putting balls down when we need it, we kind of just feed the beast. Keep it simple,” LaCoco said. “She brings a lot. She jumps high, definitely her blocking and, as you could see today, her hitting. It helps all of us because she puts balls down.”

Jones finished with 11 kills, including 3 kills and a block in the third set as De La Salle rallied for the win.

In her second year on the varsity, Jones, a 5’6” middle/outside, continues to make a name for herself after missing freshman year due to a torn ACL and meniscus in her right knee.

Returning to the court as a sophomore, she immediately made an impact. With her injury now in the rearview mirror, Jones feels strong as ever.

“It feels good [to contribute]. A lot of people think an ACL injury can be a career-ending injury,” Jones said. “I came back, and I’m better. I’m thankful for it. I’m a stronger player and a stronger athlete mentally.”

Having trailed by 4 points through the first half of the third set, De La Salle looked to be in trouble against a hot-hitting Wolfpack.

But, the Meteors quietly snuck back into the set, going up 15-14 on a LaCoco kill, a perfectly-placed, soft set kill that landed in the back row.

Jones stepped up next, delivering a huge block at 16-15.

Several points later, LaCoco set up Jones with a pass at the middle with Jones’ kill flying out of bounds off the St. Ignatius block.

Jones followed it up a play later with a delicate touch on a free ball as De La Salle took control.

Jones said that, even after falling behind early, the Meteors stayed calm.

“We didn’t panic. We buckled down and did what we had to do to get the job done,” Jones said. “I feel unstoppable. [De La Salle Coach Anna Marassa] is always supporting me 100 percent in telling me that. It’s a confidence boost. I’m thankful to have a coach like her.”

“Amayah has become a smarter hitter. Last year, she was in mode ‘swing, swing, swing,’ no matter how high or low the ball was,” Marassa said. “Now, she’ll roll a shot; she’ll tip. She understands that sometimes you’ve just got to keep it in play. She sparks the whole team with her amazing jump and bright attitude.”

LaCoco said the chance to play one more season with her teammates has been a fun ride, even as she juggles the coinciding seasons of her high school and club teams due to the pandemic.

“I’m definitely sad that my De La Salle career is ending,” LaCoco said. “I’m just kind of enjoying being out there and being with my teammates and coaches. I’m living in the moment and enjoying it while I can.”

St. Ignatius Coach Erik Eastman said he rostered 18 girls this year, more than he normally would, as the team navigates the shortened season.

“We’ve got a lot of girls, and they’re doing a lot of great things in practice,” Eastman said. “A lot of times, it’s their first varsity experience when we throw them out there. In a normal season, you have a lot of time to work toward that. That’s the toughest part.”

Eastman expressed disappointment in how the Illinois High School Association (IHSA) handled the girls volleyball season during the pandemic.

“The IHSA could have had girls volleyball go in the fall. We could have played a good chunk of the season,” Eastman said. “They gave us no time to prepare [this spring]. We had two practices before our first game. Normally, we have 20 coming out of camp.

“They made sure boys basketball got their extra time. It’s unfair.”

Mercy Home for Boys & Girls is looking for a Driver