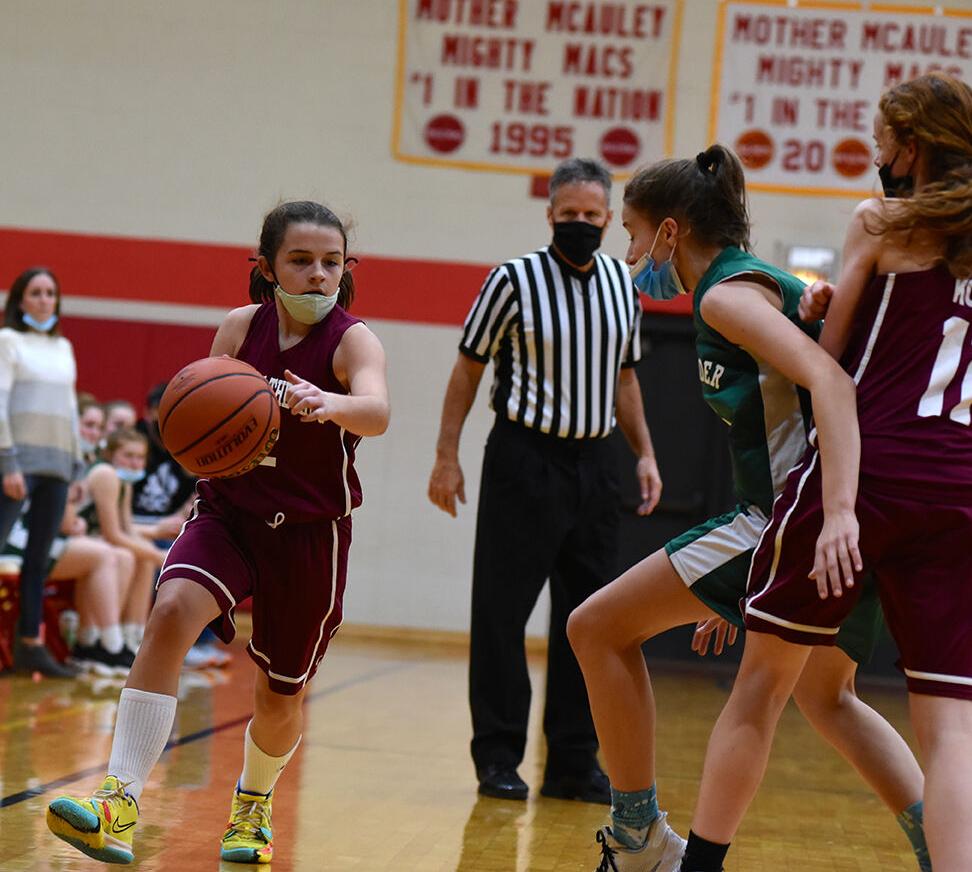 Christ the King guard Olivia Cosme works past her St. Alexander defender on a drive in the second half. Cosme delivered an all-around performance for the Screaming Eagles with 10 points, 4 rebounds, 3 assists and 2 steals. (Review photo) 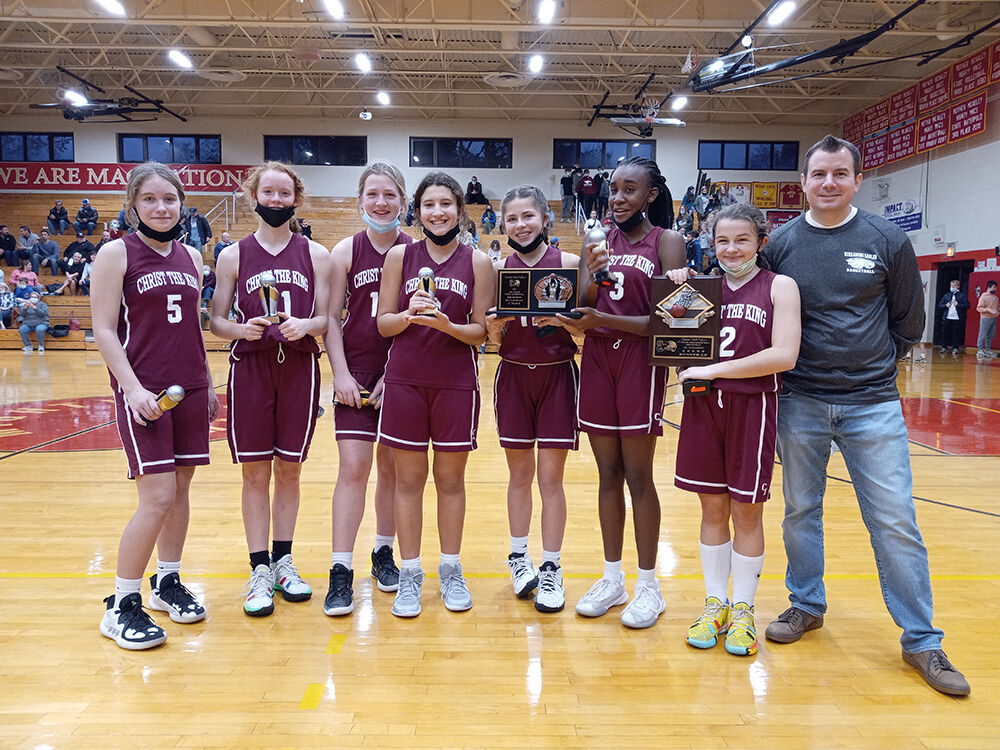 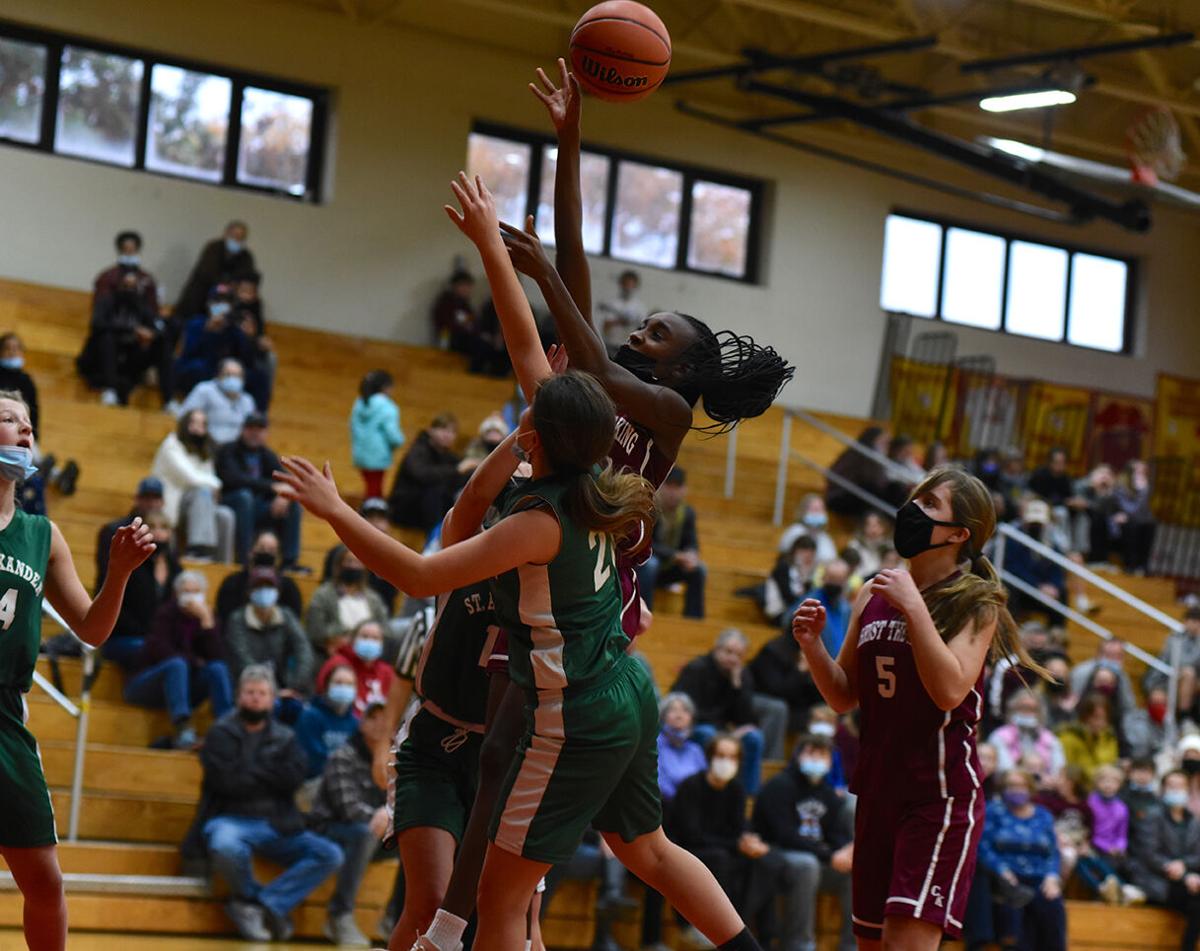 Christ the King guard Kiara Crenshaw fights to take a runner in traffic in the first half against St. Alexander. Crenshaw totaled 6 points and 2 steals for the Screaming Eagles. (Review photo) 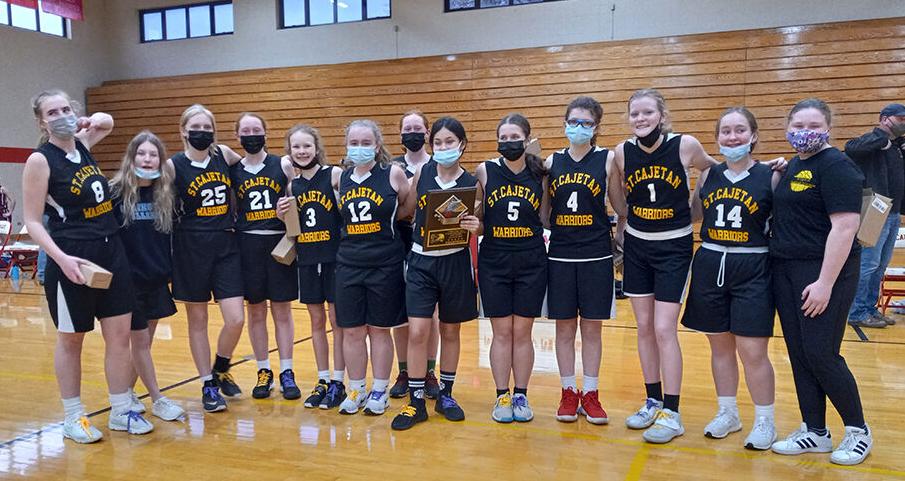 Christ the King guard Olivia Cosme works past her St. Alexander defender on a drive in the second half. Cosme delivered an all-around performance for the Screaming Eagles with 10 points, 4 rebounds, 3 assists and 2 steals. (Review photo)

Christ the King guard Kiara Crenshaw fights to take a runner in traffic in the first half against St. Alexander. Crenshaw totaled 6 points and 2 steals for the Screaming Eagles. (Review photo)

With the clock winding down in the second quarter, Christ the King guard Olivia Cosme found herself with the ball near midcourt and the Screaming Eagles in a tough double-digit hole against St. Alexander.

Regardless, Cosme and the Eagles weren’t about to go quietly—they kept working hard throughout the entire game.

That fighting spirit was on display as Cosme hoisted a long three just inside halfcourt and swished it as the buzzer sounded to give the Eagles a boost of energy.

“To be honest, I didn’t know it would go in, but the time was running out,” Cosme said with a laugh. “It ended up in the basket. It was a good shot. I knew [off my finger].”

Christ the King (CK) trailed 25-14 at halftime and hung around in the second half but could never climb fully back into the game, dropping a tough 45-26 matchup to St. Alexander on Nov. 14 at Mother McAuley High School in the Southside Catholic Conference Gold Ball championship.

CK finished the season with a 26-4 record with all 4 losses coming to St. Al’s.

For Cosme and her teammates, it was a tough loss but the only negative in a season full of memorable positives.

“We were probably one of the best teams at CK, and that gave us a big boost in conference definitely,” Cosme said. “We lost to a really good team. I played with really good players and friends. We’ve been together for years now. I’m going to go to Marist and hopefully play there, make more new friends and have a great record there, too.”

CK Coach Jim Cosme saw continued development from his roster this season. The potential was there early, and with some big wins along the way, the Screaming Eagles hit high gear.

“The start of the season was special for them just to be able to play,” said Coach Cosme. “As the season went on and they kept winning games, their focus became more, ‘Wow, we’re a really good team!’ All of a sudden, they started pushing each other in practices and in games. It was fun—they’re all such good friends and good to one another—seeing them have this success together.”

With Crenshaw, Buckley, Cosme and Kovar all scoring early, CK led 11-10 through the first quarter with a huge burst of energy. St. Alexander answered in lightning-quick fashion behind Quinn Arundel and a charge from the Raiders.

St. Al’s reeled off a 15-0 run in the second quarter before Cosme’s buzzer beater.

“They can do it all,” Cosme said. “We tried to press and slow them down, too. We got a little winded, and that made it harder. We were trying every play. We were hoping we could win, but I’m happy we got to the championship. That was awesome, too.”

“We’re a hard-working, competitive team,” Kovar said. “Even though we’re best friends, we’ll be [competitive] in practice, getting bloody noses, having some fun. We never give up. We knew there was a chance to beat them if we put a best foot forward.”

As well, the chance to compete as eighth-graders was one Kovar and her teammates wanted to take full advantage of, especially after losing their seventh-grade athletic seasons to the pandemic.

“It’s really fun and exciting to be back. We’re having fun,” Kovar said. “It makes it even more fun to play in your eighth-grade year and having fans back in the stands. It’s fun and a big boost of energy.”