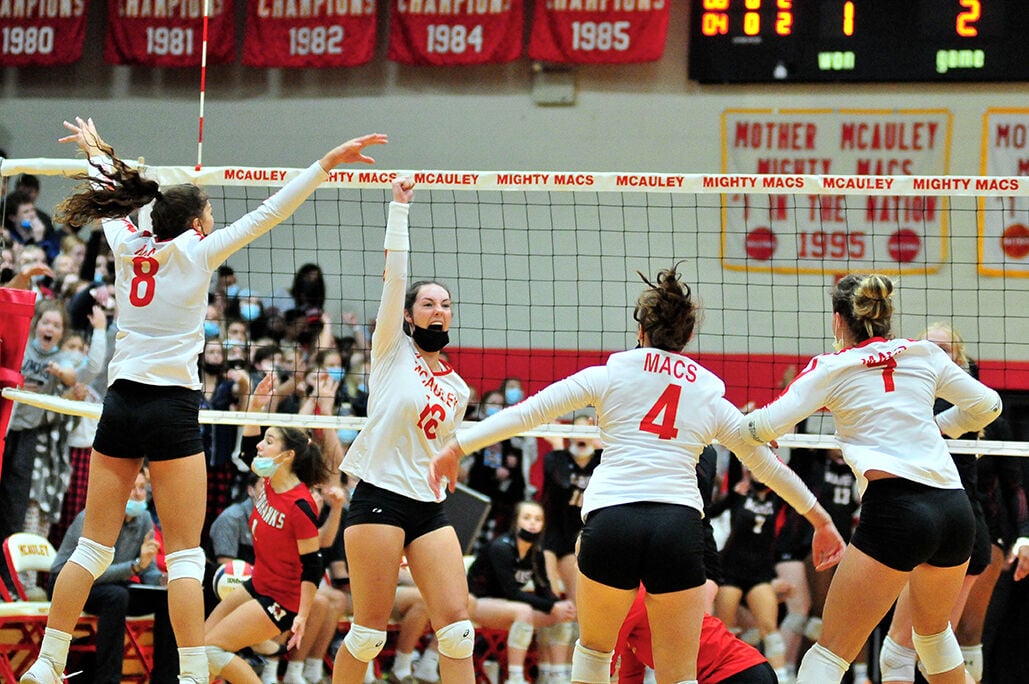 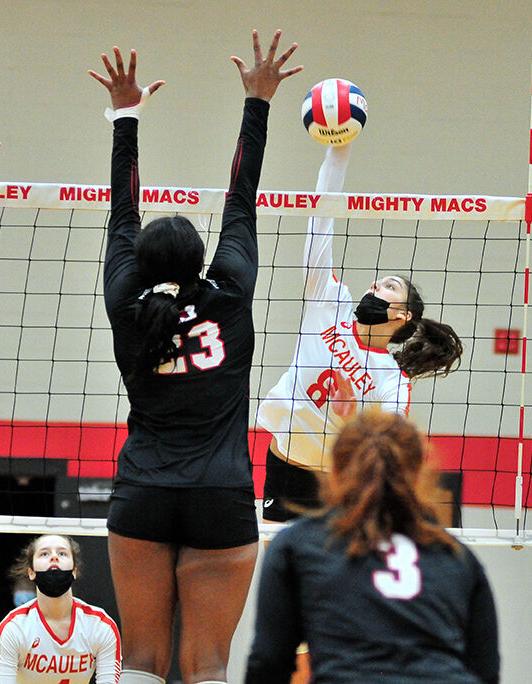 Sophomore outside hitter Ellie White swings away for a kill in the first set against Marist. White was a force for the Mighty Macs, powering home 14 kills and adding 8 digs. 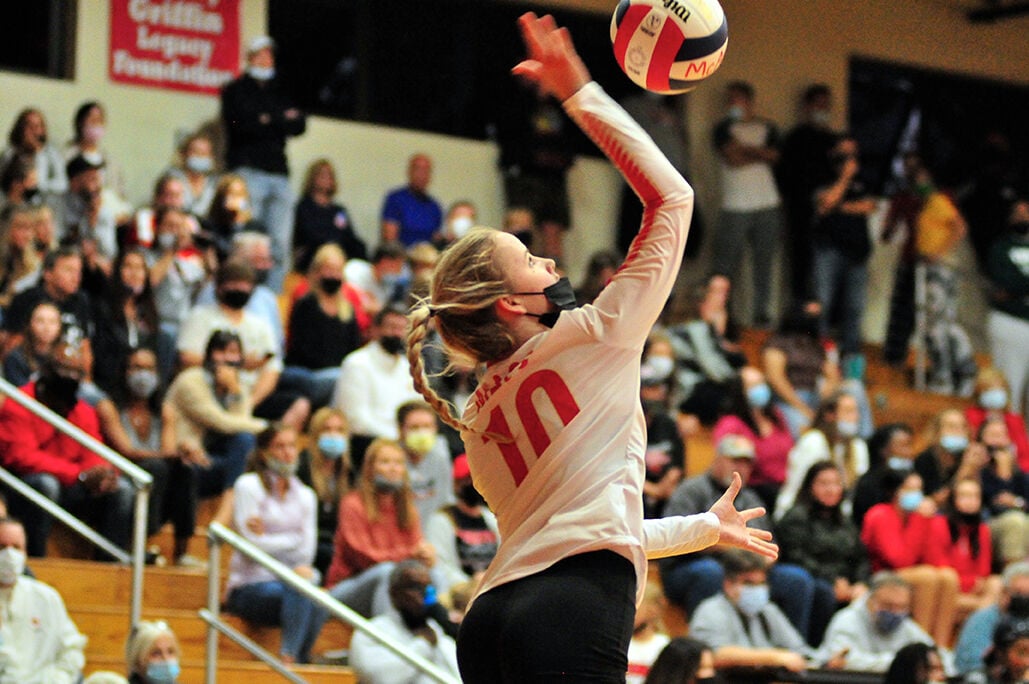 Mother McAuley senior defensive specialist Paige Bonnett serves in the second set. Her service run in the first set helped put the Mighty Macs up 14-4 early in the rivalry showdown with Marist. 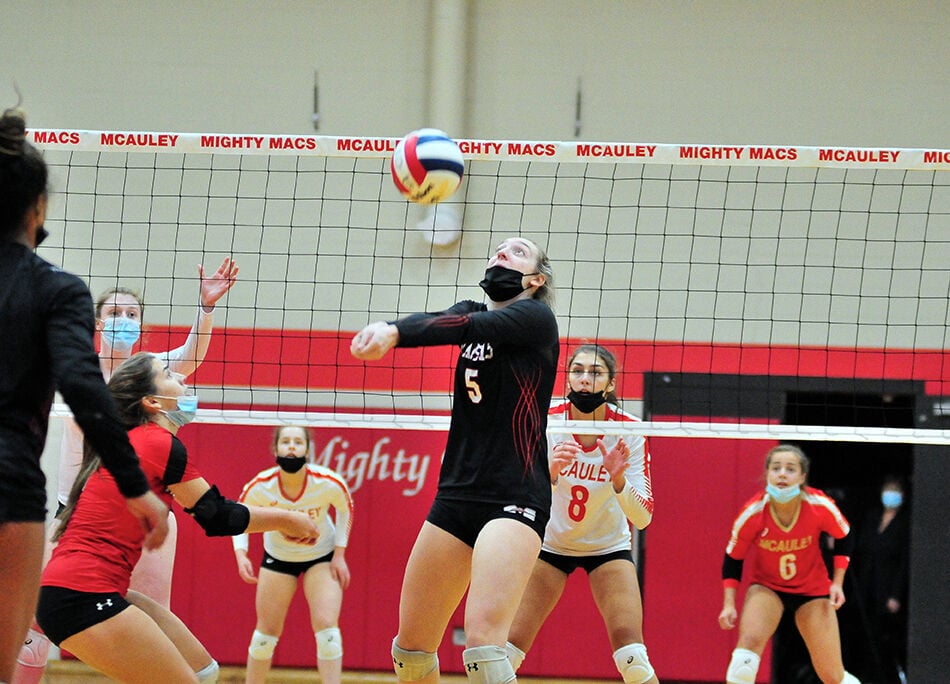 Sophomore outside hitter Ellie White swings away for a kill in the first set against Marist. White was a force for the Mighty Macs, powering home 14 kills and adding 8 digs.

Mother McAuley senior defensive specialist Paige Bonnett serves in the second set. Her service run in the first set helped put the Mighty Macs up 14-4 early in the rivalry showdown with Marist.

Having attending Mother McAuley versus Marist volleyball games while growing up, Ellie White knew all about the dueling student sections, the crazy atmosphere and the wall-rattling energy.

But, making her varsity debut last spring, due to health restrictions, the game was played in front of a minimal crowd with no students allowed.

Mother McAuley won, but it wasn’t quite the same as the games White grew up watching.

But, the rivalry was renewed on Sept. 23 in front of a packed house featuring the traditional crazy atmosphere and energy as host Mother McAuley dominated in a 25-15, 25-11 victory over Marist.

White was a force, finishing with 14 kills and 8 digs.

“Growing up watching these, I remember the energy, the McAuley students’ positivity and their attitude really standing out,” White said. “I love it. I love the cheering and loudness on the court. I had no idea that it’d be this crazy. I’ve never experienced something like this.”

The McAuley gym was already at a fever pitch during the junior-varsity game with the Macs winning in a 3-set thriller.

With the student sections again going head to head, the Mighty Macs with a construction worker theme and the RedHawks with a pajama theme, the energy rolled right into the varsity game.

“I definitely didn’t expect this many people to be here,” said McAuley senior Paige Bonnett. “I’m glad they all came out to support us. It meant a lot to our whole team.”

Bonnett (St. Christina) wasted no time helping set the tone in the opener. With McAuley leading 7-4, the senior defensive specialist rattled off an impressive 7-0 service run that included a Moonan block, a Mary Kate Sheehan kill and Moonan and Sheehan combining for a block.

“Once I started, I knew I had to keep going,” Bonnett said. “I was so pumped with all the fans and my whole team cheering me on. I couldn’t believe I served that many in a row. I was so in the moment. I was going crazy.”

In the second, it was all White as the sophomore outside hitter had 10 kills, one kill after another ripped into the defense. A run of 3 of 4 points from White kills put the Macs up 18-8.

“I love that pressure and playing in that environment,” White said. “I feel like I stayed focused in my own game and just blocked it out. We’ve been preparing for this since the beginning of the season. It was huge for us as a team.”

McAuley committed just 4 errors in the second set, running a quick-hitting, efficient attack aided by a strong back row, including Navarrete (Northwestern), Falk, Klapp and Bonnett.

“Our serving and passing are our strongest suits,” Macander said. “We have a really good offense. Our back row is where everything clicks together. They’re working hard every day. They never let a ball fall, and you can always count on them for a good pass.”

As for the offense, things are running smoothly for Macander (St. Barnabas) and her hitters. White continues to be the go-to hitter, but a band of hitters has stepped up around her.

“Our offense is in a good place,” Macander said. “Ellie is the killer. She’ll put a ball straight down, but Peyton is super-good at tips and shots and just a super-smart player. Our middles are super-smart, too, with their placement. Mary Kate is really good at using blockers’ hands to put the ball away. Everyone has their own thing going, and it all fits together really well.”

Mother McAuley improved to 16-3 with the victory.

“Defensively, this is the best we’ve looked,” said Mother McAuley Coach Jen DeJarld . “It’s always a big win with our neighborhood rival. It’s always nice to have. The fashion that the girls did it in, I think they really made a statement.”

The RedHawks had been absolutely rolling coming into the match, but Marist Coach Jordan Vidovic wasn’t overly concerned with the loss.

“We’ll use this going forward. We know it’s tough,” Vidovic said. “We haven’t played this game at home in four years, for whatever reason. We know we’ve got to work through this and push forward. I don’t think it’s [young] nerves. It’s us not being able to adjust on the fly yet. We needed to play this match.”

Marist last hosted the regular-season matchup with McAuley in September 2018.