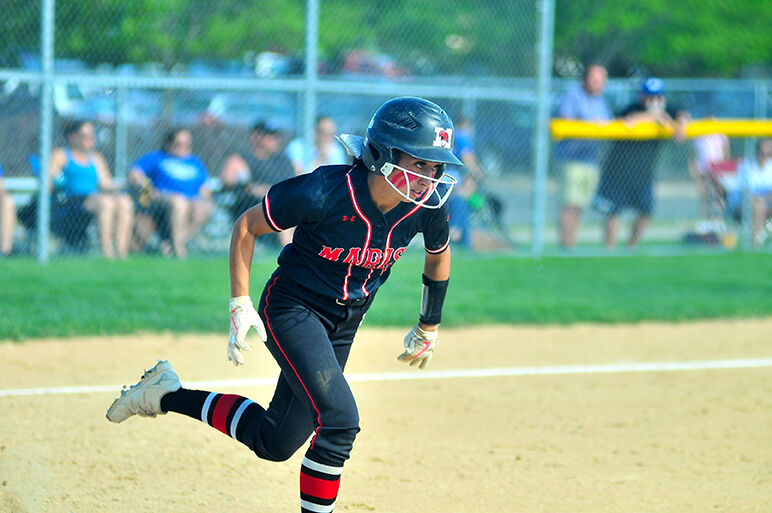 Marist senior center fielder Kali Case races up the line after her first-inning single. Case finished 3 for 3 with 4 runs, 4 stolen bases and 2 RBI in a nonconference win over Riverside-Brookfield. (Review photo) 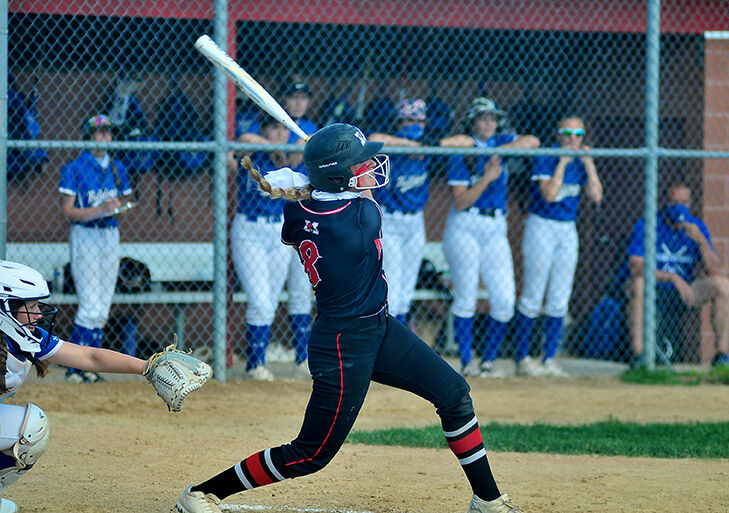 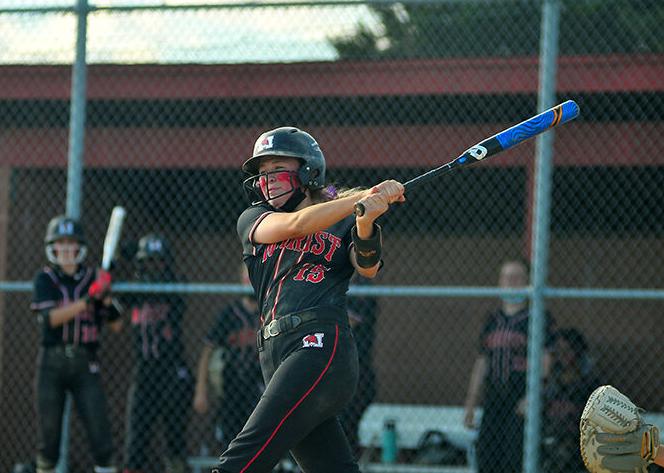 Marist sophomore outfielder Isabel Cunnea takes a cut against Riverside-Brookfield in the fourth inning. Cunnea was hit by a pitch three times and also crushed a 3-run home run for the RedHawks. (Review photo)

Marist senior center fielder Kali Case races up the line after her first-inning single. Case finished 3 for 3 with 4 runs, 4 stolen bases and 2 RBI in a nonconference win over Riverside-Brookfield. (Review photo)

Marist sophomore outfielder Isabel Cunnea takes a cut against Riverside-Brookfield in the fourth inning. Cunnea was hit by a pitch three times and also crushed a 3-run home run for the RedHawks. (Review photo)

She doesn’t need to do much, just get on base by any means and let the track meet begin.

“As long as I put the ball in play and beat the throw, I know the girls behind me will get me in,” Case said. “Being able to run and have someone fast behind you [Easton Lotus], it creates more chaos. You can tell when we put the ball in play teams can freak out a little.”

Helping Marist to an impressive 12-0 nonconference victory on May 26 over Riverside-Brookfield (R-B), Case went 3 for 3 with 4 runs scored, 4 stolen bases and 2 RBI in the 5-inning win.

The RedHawks improved to 28-1.

Case, a Boston College recruit, has been on the varsity since her freshman year and has consistently batted at the top of the lineup.

She’s been a fixture in the leadoff spot this year.

With senior team captain and speedster Lotus (Louisville) hitting behind her in the two-spot, the RedHawks feature a dangerous one-two punch to jump start the offense.

“I just try to attack early and work the count, keep it simple,” Case said. “I don’t need to do anything too big, which is nice. A single works when I’ve got Easton, Emily Bojan and Isabel Cunnea behind me.”

Leading off in the first, Case started with an infield single and moved to second on a R-B throwing error.

A Lotus single moved her over to third, bringing up Bojan (Queen of Martyrs).

The junior catcher teed off on a pitch on a 2-2 count, ripping a 3-run home run to center field.

Looking to see all the R-B pitchers were throwing, Bojan said she headed to the plate with a patient mindset.

“The past couple games, I usually jump on first strike, but today I wanted to see more pitches and get comfortable,” Bojan said. “Inside and outside, high and low, I was waiting for my pitch and the zone I like.”

Sophomore Eileen Donahue added a sacrifice fly to right later in the inning to extend Marist’s lead to 4-0.

The RedHawks scored a run each in the second, third and fourth and then blew up for 5 more runs in the fifth.

Marist finished with 11 hits, 2 intentional walks, a walk and 8 stolen bases. Cunnea, a sophomore left fielder, was also hit by a pitch in 3 at bats.

“It’s not just the top of our lineup. The bottom of the lineup too, we’ve got speed all over the place,” Bojan said. “One or two outs, someone at third or second and third, any way to get the RBI for the team. The girls always get on base somehow, one way or another.”

Capping off another big day at the dish for the team, Cunnea ended the game with some fireworks, hitting a 3-run blast to left field.

She just missed a home run on the pitch before, depositing a pitch beyond the left-field fence in foul territory.

“I wasn’t angry. Yeah, I guess I was a little angry,” Cunnea said with a laugh. “They intentionally walked Emily. That means they don’t think I can hit. I’ve got to show them and prove myself. I even told Kali that I was going to hit a home run. It worked out.”

Case and Lotus are the only seniors in the lineup. Bojan, Cunnea and a strong crew of relatively inexperienced but highly talented juniors and sophomores has quickly found their groove this season.

“The seniors this year are great leaders and good role models,” Cunnea said. “As soon as I joined the team, they all made me feel welcome. We can all step up when we need to, and everyone gets each other and knows their roles.”

Junior Brooke McNichols entered the game in relief in the fifth, striking out 2.

Marist is the No. 1 seed at a Class 4A sectional, and the school will also host the supersectional game on June 14.

For Marist Coach Colleen Phelan, she knows her team’s speed can be an incredibly dangerous weapon.

“I love that type of [running] play and that type of player. That’s the type of player I was,” Phelan said. “We don’t always let them run because you don’t want to risk an out, but 99 percent of the time, our girls are smart base-runners who know what they’re doing. You let them roll. It’s fun to watch.”